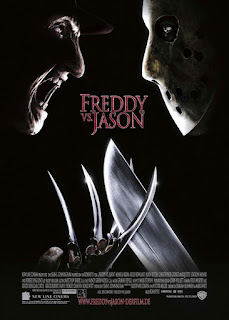 I distinctly remember being the odd man out among my friends when this film was finally announced. It had been in the works since fucking forever, well before the ending of JASON GOES TO HELL: THE FINAL FRIDAY ever graced the silver screen. Back in the mid-80s, this film would have made sense. There would have been a purpose to even making it in the first place. Jason and Freddy were at the peak of their popularity back then, but by the time this film hit theaters in 2003, fortunes had changed quite a bit. The FRIDAY THE 13TH franchise was basically dead. JASON X, released just two years prior, was a box office bomb and the last of the mainline Freddy films, WES CRAVEN'S NEW NIGHTMARE, wasn't just a commercial flop, it was also released damn near a decade before this crossover was even filmed.

So why even bother? That was my opinion back in 2003. The idea sounded absurd to me. Sure, these two characters were constantly sparring at the box office every goddamn summer in the late 1980s, but they were two different beasts altogether. The (later) A NIGHTMARE ON ELM STREET movies were cartoons, dumb but visually inventive bits of horror comedy. The FRIDAY THE 13TH films, while no less dumb, were redundant, largely mean spirited, routine slasher films. There is no way to mix the two and have it turn out palatable. You might expect peanut butter and jelly, but you're really just going to get Vegemite and ass.

And then the film came out and I saw it opening day with my friends. They all loved it. I hated it. The end.

And I still do hate it. I hate it quite a bit actually. It's pretty much everything I hate about the two franchises rolled up into one. The characters are terrible, especially our Final Girl, some useless shithead with Dead Mom Syndrome that won't stop moaning about how she lost the love of her life at the ripe old age of fucking fourteen. Or how about the stereotypical sassy black best friend, the kind of character that could only be written by white people? I'm also fairly certain that the only reason the characters Freeburg and Shack are in this movie is because someone at New Line overheard their kid say that MALLRATS and SCHOOL OF ROCK were like the best movies everrrrrrr. But as New Line either couldn't get or couldn't afford Jason Mewes and Jack Black, we essentially have cosplayers in the roles.

So to sum up the plot, Freddy is having a hard time finding a job ever since the parents of Springwood, Ohio, started force feeding their kids dream suppressants and locking up any teen who had ever heard the name Freddy Krueger. So Freddy (somehow) resurrects Jason and sends him on his merry slashing way in hopes that Jason's handiwork will (somehow) make people remember him. But before all this can occur, Jason, who resides at Camp Crystal Lake in goddamn New Jersey, has to walk across the entire state of Pennsylvania to reach Ohio. Unfortunately, we don't get to witness any of that because (again, unfortunately) we have to spend time with our gaggle of absolutely hideous “teenagers”.

The only two “teenagers” worth mentioning by name are the Final Girl, named Lori (wink, wink), and her boyfriend, Will. The rest are useless, disposable faces just lumped together in the victim pool. There's some nonsense storyline about Freddy killing Lori's mom, but that's really only in there as a callback to the end of A NIGHTMARE ON ELM STREET. There's also an asylum where the parents of all the Springwood children keep their offspring locked up so they can't spread the knowledge of Freddy and… Well, that's the best thing about this movie. I like that bit. The treatment of Freddy is actually quite fascinating, reducing him to a meme with the ever present threat of the Streisand Effect looming in the background. That could have been great. That would have been interesting.

Along comes Jason to kill a bunch of kids at a rave and even though eyewitnesses report that the killer was a hulking dead guy wearing a hockey mask, Freddy's plan goes into action. The kids all start dreaming of Freddy and little by little, he regains his power. But as Jason is a single minded killing machine, Freddy has to put that dog to sleep ASAP before there aren't any damn kids left to kill.

And this is where the film begins to display a rather selfish desire to retcon both franchises just to make its stupid script work. For example, even though Jason has never shown any compunction towards drowning people or even the slightest bit of bother at spending years at the bottom of Crystal Lake, the screenwriters decide to make him terrified of water. Freddy suddenly gains an ability to control individuals that are completely awake. I mean, I get that this is just a stupid slasher movie and no one in the mainline franchises ever seemed to give a shit about continuity anyway, but come on now… Did you think no one would notice?

People other than myself probably did, but I doubt many cared. At this point in the series, Freddy wasn't even remotely like himself anymore. The Freddy of Wes Craven's original was a dark, scary child murderer. The Freddy of A NIGHTMARE ON ELM STREET 3: DREAM WARRIORS was a wise cracking buffoon. Freddy Krueger was meant to be a dark mirror image of 1980s suburban life, the ultimate "fuck you" to the kind of repressive denial that turned “Don't Worry, Be Happy” into a goddamn national anthem. Like the Indian burial ground in POLTERGEIST, Freddy was the dark soil suburban life was built on. There's a reason so many horror films of that time feature families with secrets, parents with hidden pasts, and outside horrors slowly encroaching upon the so-called American dream.

When Nancy drags Freddy from the dream world, when she faces what others have repressed, she is granted (or so we think) closure and freedom. It's a plot device that exists solely to fit the underlying analogy. But by the time we get to the first sequel, that analogy is forgotten and so are the rules that tied it all together. Suddenly, Freddy can manifest in reality and crash a pool party. We have John Saxon duking it out with a Harryhausen skeleton in an auto salvage lot. So maybe I'm just being a bit too hard on old FREDDY VS JASON. After all, it isn't the first film to flip the bird to years and years of thematic and/or logical continuity.

Perhaps I'm just being a grumpy prick for even daring to point out just how enormously stupid this film is? Am I expecting too much from film franchises that feature, among other things, Freddy bouncing Breckin Meyer all over a house using a Power Glove and a demon baby thingy crawling up Erin Gray's snatch? Maybe I'm asking too much for Jason to not have eyeballs 90 seconds after Freddy stabs them out. Maybe it shouldn't bother me that Freddy, who is supposedly human after being yanked from the dream world, is every bit as invincible as the uber-zombie Jason. Maybe the fact that the film contains date rape as a visual gag, several not-so-vaguely racist bits of humor, and a character trying to insult Freddy by calling him a “faggot” (because I suppose you can't really call the guy a “dirty pedo” as an insult because well…) shouldn't bother me.

But fuck it, it does. Because again I have to ask, what the fuck is the point of all of this? We know Jason can't die because a) he's supernatural or b) because he's really a demon puppet slug monster that can infect other people's bodies. We know Freddy can't die because if anyone even so much as hears the name “Freddy”, he regains the ability to invade dreams. And as we see, plain as day, in this film that Freddy isn't above slashing adults to death in their sleep, I don't know why he just doesn't do that instead of being an obstinate little bitch living in self imposed retirement because boo hoo I can't kill kids wahhhhh

Sure, it's kind of amusing to watch Jason being pinballed around Freddy's dream palace (though it would have been even more fun had we not already seen someone lob shit at Jason using the power of their mind back in 1988) and the idea of kids weaponizing Jason against Freddy was neat. And yes, it was kind of entertaining to watch Freddy throw elbows after Jason rams him through an entire walls worth of windows, but everything else about the film is just painfully, horribly, absolutely, dreadfully terrible. It's like they had a good idea for a standalone Freddy film and then someone came along and said “you know what this film needs? Shit. It's needs shit. Tons and tons of shit. Shitty everything. Shitty visuals, shitty acting, shitty characters, shitty exposition filled moments of hamfisted puke, shitty heavy metal music, shitty dialogue, shitty shitty shit”.

And then someone else said, “well, the last few FRIDAY THE 13TH movies were shit”. Then the glorious sound of cash registers opening rang loudly through the air, like a chorus of sweet, stupid angels, and the rest was history.