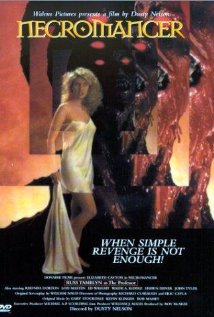 But I can't end it right there. After all, I have a snarky reputation to live up to. Honestly, I don't quite feel like this movie deserves to be torn to shreds. Despite it being a rape/revenge film, it's surprisingly inoffensive. I would even go so far as to label it “fun”. And that makes NECROMANCER a bit of an oddity. A fun rape/revenge film is an uncommon find in the distasteful land of exploitation movies.

The lovely Elizabeth Kaitan stars as Julie, a college student/aspiring actress who is dating a hunky rock keyboardist named Eric. While spending some after hours time in the drama department, Julie is assaulted by three fellow students who have broken into the building to steal the answers to an upcoming drama class test. When the thugs discover an old, revealing letter written by Julie to the drama professor, Charles, they decide to escalate things from simple assault to something much worse. Paul, the lead thug, rapes Julie while his friends watch. Paul then tells his victim that if she goes to the cops, the college board will receive the letter they found, the one that reveals Julie's past sexual relationship with her teacher.

Understandably distraught, Julie turns to her friend Freda, who in turn takes her to see a mystic named Lisa. Lisa asks Julie if she wishes to engage in a rather shady ritual, asking her to say “yes” three times (demons understand enthusiastic consent better than most college aged males). The ritual begins and before you can say “I can see the damn wires”, things start flying through the air. Julie and Freda, again understandably distraught, run like hell. They laugh it off later, thinking it was just a stupid sideshow gag.

But then Julie's rapists start dying, killed off by some supernatural force that takes the seductive form of our sweet, blonde protagonist. And because Julie is a woman with a conscience, she decides to try to stop doppleJulie from killing even more people, specifically her well meaning but dumb as a bowl of shit boyfriend. Perhaps Ernest, the weirdo Wiccan boy with green hair highlights, can be of some assistance? Or maybe it's simply too late to put this particularly sexy genie back in it's bottle?

Man, there is a lot of man flesh on display in this film. Lots and lots of asses, accidental ball sacks and crotch bulges, enough to fill at least two David DeCoteau films. The requisite female nudity is all there too, with nary a 15 minutes going by without Kaitan stripping off her wardrobe. There's also plenty of scenes featuring shower heads and sinks spewing blood all over the place. The demon, when we finally get a glimpse at it, is obviously little more than a puppet head with animated eyes clumsily superimposed over it. The climatic showdown between Julie and doppleJulie is an awkward and deeply hilarious mess, one in which a super powerful demon is bested in an unconvincing cat fight.

In other words, this movie is everything you want it to be. It's often a bit sleazy, unapologetic in it's flaunting of meat, both female and male, and so ropy and lovingly cheesy that I couldn't help but smile my way through it. Well, most of it. The first 35 or so minutes are actually rather disarming and somber. The rape scene is quite troubling to watch, primarily because it's filmed in entirely the opposite fashion as the rest of the movie. It is handled with care, rather than being a quick and simple excuse for showing some tits (for the record, the rape scene here is actually filmed with the actors more or less clothed, with less emphasis on the male pleasure and more on the woman's trauma). The aftermath of the rape is handled carefully as well, as are the scenes in which Julie wrestles with her inability to share the news of her trauma with her boyfriend.

Of course, the more serious dramatic side of the narrative is just a preamble to the weird excesses of the last hour of the film. Don't walk into NECROMANCER expecting MS .45. Expect lots and lots of cheese, as this movie starts flinging gouda all over the place at the 40 minute mark. From that point on, the movie is non-stop, tearing through its remaining running time with exploitation aplomb. I will admit that the murder set pieces are outright disappointments with nary a drop of blood to be found, but the film offers up more than enough weird shit to make up for its anemic shocks.

For example, have you ever wanted to watch Russ Tamblyn strut around with a Jheri curl while groping college girls and mangling Shakespeare? I know I never did, but after watching NECROMANCER, I think more films should have cast Tamblyn in the lothario role because he is goddamn great at it. As this film is set in and around a college drama department, we get to watch horrible actors pretend to be horrible actors, which ironically makes their performances hands down the best performances in the whole damn movie. And then there's Kaitan, an instantly likeable, sweet as candy screen presence. Even though she's working with Z grade material, she ably carries the entire film on her shoulders. She really is the deciding factor for me here. Her presence turns NECROMANCER into something I wouldn't mind watching again.

Plus, when you think about, all this bloodshed and weirdness only happens because three preppy sociopaths didn't want to study for their drama class test. That easily takes the top spot for Most Ridiculous Inciting Event. Hell, even FRIDAY THE 13TH: A NEW BEGINNING can't match that and that film featured over a dozen people getting murdered because some asshole didn't want a chocolate bar.
Posted by David Grant at 11:25:00 PM
Email ThisBlogThis!Share to TwitterShare to FacebookShare to Pinterest
Labels: Elizabeth Kaitan, Horror, Necromancer, Rape-Revenge