MY BROTHER HAS BAD DREAMS 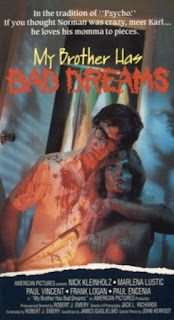 Robert J. Emery's 1974 film MY BROTHER HAS BAD DREAMS begins peacefully enough with 20-something Karl doing a relaxing bit of fishing off an idyllic Florida pier. As a thunderstorm rolls in, Karl packs up his belongings and heads off home, unfortunately not making it back before the rain starts pouring down. He enters his home, saying a nice hello to his wheelchair bound mother. He apologizes for getting the floors wet, dutifully offering to clean them right up. Upon entering the kitchen, Karl comes across a stray cat that has somehow made its way into the house. His feline phobia raging, he chases the cute little bugger away. Frazzled and upset, he confronts his mother. When she refuses to answer him, he beats her to death with a fireplace poker.

Only he doesn't. His mother isn't there, just a dime store mannequin sitting in his mother's dusty old wheelchair. Karl's mother died well over a decade ago, beaten to death by her husband with the very same fireplace poker Karl now has in his hands. Karl collapses in fright and anguish, his emotions going haywire. The arrival of his older sister, Anna, soothes his nerves. She asks him to go change his clothes and lay down, sensitive to the fact that her brother is clearly having another one of his regular episodes, the unavoidable fallout from witnessing the brutal death of his mother all those years back.

Karl complies, changing and resting in bed. But then he hears his sister in her room. Sneaking into the hallway, Karl masturbates as he watches his sister sit nude at her vanity. An accidental bit of noise draws her attention and Karl quickly makes his way to his bedroom, pretending to be asleep. After his sister checks on him one last time, Karl finally calms down enough to catch some shut-eye.

The next day, Karl decides to do a bit of skinny dipping at the ocean. That's where he meets Tony, a handsome, motorcycling drifter. The two become fast friends. Tony even gives Karl a few motorcycle lessons. Despite his obvious mental issues, Karl is every inch the polite, personable fellow. He invites Tony back to his home for dinner. Though their initial meeting is rather tense, Tony and Anna finally hit it off, with Anna explaining the history of her family and why her brother, polite though he may be, can sometimes be a bit erratic. The night ends with Tony and Anna making love, an act that does not escape Karl's attention.

Later that night, Karl has another episode, a horrible bit of night terrors that leaves him all but catatonic. When Tony tries to calm him, Karl attacks, only stopping when Tony knocks him out cold. In the morning, Tony wants to leave, but Anna convinces him (practically begging him) to stay. She's lonely and over her head. Tony, who is actually quite the decent guy, gives in, offering to stay not only for Anna's sake but for Karl's as well. But Karl isn't as pleased with this turn of events as Anna is. In fact, Karl is reaching a breaking point. Tony is beginning to act more like a father than a friend and for a guy like Karl, that means trouble.

MY BROTHER HAS BAD DREAMS was not the original title of this film. Emery's little shocker was released under the title SCREAM BLOODY MURDER, only receiving a title change when it came time for VHS releasing. By that point, Marc B. Ray's SCREAM BLOODY MURDER, a cheapo exploitation flick about a father-killing creep with a hook where his hand should be, had already been released to market. If you ask me, MY BROTHER HAS BAD DREAMS is a much more suitable title, even if does promise a clumsy bit of hokum. And a clumsy bit of hokum is not what this film is. Not by a long shot.

It's rare that I find myself utterly knocked out by a relatively unheard of 1970s horror film. Not to sound like a braggart, but I've been watching horror movies with a devout fervor since childhood. Chances are, if I haven't heard of a film, it isn't going to be worth hearing about in the first place. MY BROTHER HAS BAD DREAMS is a film I never saw on the shelves of my local video rental store. It isn't a film I ever heard talked about at conventions, or on podcasts, or, well, anywhere. A rudimentary search online turns up relatively few mentions of the film (though to be fair, there might be more out there, but they're getting lumped in with the other film titled SCREAM BLOODY MURDER) and even my die hard exploitation loving friends had no recollections of ever seeing it in the wild. And that's a damn shame. We live in a day and age where absolute garbage is getting sparkling 2K remasters and deluxe Blu-ray home releases. Yet MY BROTHER HAS BAD DREAMS is relegated to VHS rips floating around private trackers, robbed of any real chance to earn the following it so goddamn well deserves.

Now I understand that what I just said might come across as a bit hyperbolic. You might think I'm simply exaggerating to make up for two straight weeks of bad reviews (which is all bad movies deserve, damn it). But no. I'm not exaggerating. MY BROTHER HAS BAD DREAMS is a damn fine little film, one that desperately needs to be rediscovered and released back into the wild in a form that doesn't look like dog shit.

It reminds me a bit of Pete Walker's FRIGHTMARE. It's a film about a family poisoned by a violent past, all but condemned to repeat it. It's a small film with a small cast, perfect for a more intimate, psychological affair. The family dynamics are spelled out within the first 15 minutes. A boy unable to get past his mother's death. A sister who tries to fill that motherly role. A sick boy who is one step from spiraling downhill. A passive aggressive enabler who refuses to get him help, if only because that would mean losing what little purpose she has in her life. The introduction of Tony exasperates both Karl's possessive desire to keep Anna (the friend, the mother, the sex object) to himself and Anna's self destructive martyr complex. The fact that the film ends in disturbing, entirely devastating violence is a given, but the film is far more concerned with psychological violence, both self-inflicted and other-inflicted, than the physical.

It's the kind of film armchair psychologists would have a field day with, loaded with symbolism both Jungian and religious. It flirts with guilt, with repression, with co-dependency, with lust and psychosis, and it does it all with a straight face, only descending into the land of hamfisted cheese during a few brief dream sequences (gelled lights and dutch angles galore). This is not a film you half-watch with distracted bemusement, eagerly awaiting the next bit of histrionics. This is a film that unravels slowly and deliberately, imperceptibly crawling deeper under your skin with every passing moment. The bloody finale packs a punch, not because the violence is unusually strong or convincingly portrayed, but because it was avoidable. Like FRIGHTMARE, there is a real, tangible sense of tragedy running though the film. Karl and Anna are both victims of a single crime, locked in perpetuity, endless victims and victimizers, forever repeating a cycle of self-flagellation and mutual abuse.

No, this is not a cinematic classic. It is cheap, rather dull in terms of direction, with a score that sometimes sounds like it was pulled straight from MANOS: THE HANDS OF FATE. The acting however is quite good, especially from Nick Kleinholz, here starring as Karl. In my review of THE THIRD EYE, I talked a bit about Franco Nero's performance as the mad, murderous Count and about how an over-the-top performance of movie madness can ruin the tone of an otherwise serious film. Karl is not your stereotypical movie madman (well, in motive he is but…). Looking a bit like Jeffrey Donovan crammed into Eddie Deezen's body, Kleinholz's performance is far more subtle than you would expect, especially from a cheap 1970s psycho-horror film with the title MY BROTHER HAS BAD DREAMS. His performance is just the right mixture of sympathetic and overbearing, the perfect flavor of wacko. It's comparable in both texture and technique to John Amplas' performance in MARTIN. That's how good it is.

The rest of the cast is uniformly fine as well, though no one was going to be winning an Oscar. But the real star is Emery, a director I only knew from his action schlock fests RIDE IN A PINK CAR and THE FLORIDA CONNECTION, two films I didn't really like. I have to give the man all the credit in the world. With MY BROTHER HAS BAD DREAMS, Emery created one of the finest low budget psycho-thrillers I've seen in a very long time. I really was blown away by just how effective this film was, how it worked its way into the back of my brain and just started pushing buttons. When the film was over, I felt a mixture of sadness, disgust and genuine fascination. MY BROTHER HAS BAD DREAMS is a film I will definitely return to over the years, quite possibly in another review. There's a lot to chew on here, but unlike most low budget films of its kind, this one won't leave a horrible taste in your mouth.
Posted by David Grant at 11:31:00 PM
Email ThisBlogThis!Share to TwitterShare to FacebookShare to Pinterest
Labels: Horror, My Brother Has Bad Dreams, Psycho-thriller, Robert J. Emery, Scream Bloody Murder