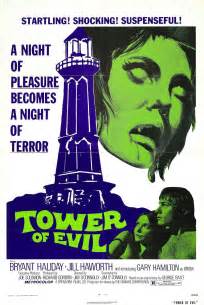 Two fishermen, middle aged Hamp and his elderly father, land on the shores of Snape Island, a rocky outcropping home to a towering, rundown lighthouse. As they make their way to the lighthouse entrance, they come upon a grisly discovery. A naked male corpse lying face down in a puddle next to a disembodied arm. And the discoveries keep coming. A decapitated nude woman lying in a stairway. A hippie pinned to the wall by a golden lance. Hamp's father, however, finds something entirely different in a small closet upstairs, a nude woman, screaming in hysterics. She stabs the old man to death before running full speed out of the lighthouse, only stopping when Hamp delivers a sharp blow to her forehead.

The woman's name in Penny. The man in charge of her care at the hospital tells us that she is completely catatonic. Utilizing a strange hypnosis machine, he is able to pull some information out of her regarding the deaths of her friends. Penny tells us about an “evil” they encountered on the island. The cops write it off as hogwash, eagerly awaiting Penny's coming about so they can nail her with murder charges.

A short time later, a small team of researchers and antiquarians head to Snape Island. Hamp offers to take them. Truth is, he's the only person in the area willing to take the journey. Hamp has a history with the island. It's where his brother, his sister-in-law and their child all died, disappearing into the sea, never to be found. Along for the expedition is Brent, a private investigator unconvinced of Penny's guilt. The rest of the party includes Dan, Nora, Adam and Rose, four archeologists, all of whom are romantically entangled. They're heading to the island to find out why that hippie was found with an ancient Phoenician artifact rammed through his abdomen. They theorize that a Phoenician sailing vessel must have crashed or been stranded on the island sometime in the past, leaving behind a treasure trove of golden artifacts and maybe even a temple devoted to the Phoenician god of fertility, Ba'al.

Within a couple of days, things start to go south. Brent vanishes for hours at a time. Someone destroys their boat and wrecks their radio. Hamp's sob story of a missing brother begins to spring leaks. A withered, messy corpse turns up in the living area. Clearly, they are not alone on this island. Meanwhile, back on the mainland, Penny is beginning to remember more and more...

For half of its running time, Jim O'Connolly's TOWER OF EVIL is great, gory fun. Released in 1972, the film is a proto-slasher, a mixture of sex and violence built on a shaky foundation of horror movie logic. Fans of the sub-genre will no doubt delight in the constant “let me go investigate this strange noise alone” moments, the juxtaposition of naked flesh with spilled blood, and its willingness to push rationality aside for a good gory gag. The first chunk of the film also has a definite giallo influence to it. The question of who committed the murders is very much an open question and the way the film cuts between the expedition party on the island and Penny at the doctor's office, her memory slowing returning, seems to set up a mystery thriller in which we learn that someone on the island is not who they say they are.

Alas, that isn't the case here. Penny's story is dropped less than half way through the film. Yes, we do in fact find out who committed the murders and no, it isn't someone in the expedition group. It's some random third party, a man who looks a bit like the world's worst Eegah cosplayer. So why do we even bother cutting back to Penny? Why do we even need to see what happened on the island before our expedition party assembled if it doesn't have any impact whatsoever on the story? Everything related to Penny and her friends should have been cut together as a pre-credit sequence, not spread out through the first half of the film. It's misleading, damn it, because all of its gruesomeness promises not only an impact on the narrative, but also a third act bloodbath the likes of which you have never before witnessed.

But in the same way that Penny's misfortunes are really just one big MacGuffin, the bloodshed that occurs within the half is just a big tease. Once our expedition party settles in for their first night, the film becomes a long, dull slog devoted entirely to relationship squabbles and sexual frustrations. I'm not sure why the filmmakers think we would rather watch intolerable 40-somethings smoke weed and screw instead of watching likeable 20-somethings smoke weed and screw, but that is literally what the film offers up in lieu of slasher movie theatrics. Oh, and melodrama. Tons and tons of melodrama. And call me crazy, but I honestly didn't give a damn that Adam and Rose used to date and want to date again but Nora won't give Adam a divorce even though she clearly loves Dan who is currently dating Rose but Rose is unhappy with Dan because Dan isn't like Adam and BLAHHHHHHHHHHHHHHHHHH

I don't give a shit.

But there really isn't anything else to give a shit about in TOWER OF EVIL until just after the one hour mark. At that point, the slasher movie stuff kicks back in with folks biting it left, right and center. Unfortunately, the producers blew their effects budget filming the opening murders so every attack by our hairy, drooling killer is a bloodless exercise. You can actually feel the movie running out of energy as it goes along. The pacing gets slower and slower. The acting gets less and less precise. The score becomes more and more subdued. Even the finale, a chase and fight between a woman and a deformed maniac amid a fiery inferno, feels like a yawn.

There are things I appreciate about TOWER OF EVIL. For example, I'll take a naked Candice Glendenning any day of the week. The presence of Jack Watson is always welcome, too. I love the set bound environments. I love the concept of a madman wandering through a vast network of underground caves on an island mainlanders consider haunted. But for every one thing TOWER OF EVIL does well, there are two things it does poorly. There are simply too many bad decisions being made, like the trading of mystery for melodrama or not properly utilizing its dual narrative set-up. It's an “almost” film, the kind of movie you watch and then wince about after. Not because it was terrible, but because it was all going so well before BOOM it just fell right on its face. And there's really very little to do afterward except shrug and sigh. You almost made it, TOWER OF EVIL. Almost.