THE GIALLO PROJECT - THE THIRD EYE 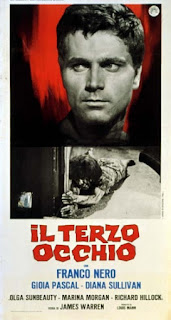 Truth be told, there isn't much giallo in Mino Guerrini's THE THIRD EYE. Or at least not much of what is commonly thought of as giallo. The film fits comfortably into the Poisoned Past narrative type. It deals with a young, rich man driven to insanity and murder by a woman under his employ. It's the kind of giallo that wasn't made much in the 1970s, with the decade all but consumed by the Amateur Detective narrative. There is no mystery to be solved in THE THIRD EYE. The killers are out in the open, their motives crystal clear. Guerrini trades the more common murder mystery tropes for those of the Freudian psycho-sexual thriller, swapping the antagonist/protagonist roles to give us a movie about a murderer, rather than a simple thriller about murder.

Franco Nero stars as Mino, a twenty-something Count living in a large villa somewhere in the Italian countryside. Around him orbits three women. There is his mother, a woman who seeks to control him, Marta, the maid who secretly loves him, and Laura, the woman he will soon be marrying. Laura wants Mino to move away with her, away from his domineering mother, but Mino refuses. Frustrated, Laura heads off home, unaware that Marta has severed the break lines on her car. Mino takes off after her, leaving Marta and his mother home alone. While he is gone, the two women have a bit of a spat, one which ends with Marta pushing Mino's mother down a flight of stairs before strangling her to death. Things don't end well for Laura either. Unable to stop her speeding car, she plummets down the side of a ravine, dying in the crash.

Mino returns home to grieve over Laura's death only to be faced with the police. They inform him of his mother's “accident”. And just like that, Mino begins his downward spiral. As time goes on, Mino becomes more and more unhinged, eventually bringing a burlesque dancer home with him just so he can strangle her in his bed, a bed also adorned with the preserved body of Laura. Overhearing the racket, Marta investigates. She finds Mino in shock and comforts him, even offering to help him clean up his mess. Maybe a bit of hydrochloric acid would make this all go away. But in exchange for her silence, Marta demands that Mino marry her, placing her at the top of the food chain where she feels she belongs. After all, her father damn near ran the estate for decades. But an unspecified amount of time (and an unspecified amount of victims) later, a new complication arrives in the form of Laura's identical twin sister, Daniela. With that, the film descends into bloodshed.

It's obvious within the first 15 minutes that Guerrini's main inspiration for his film was Alfred Hitchcock's PSYCHO. All the signs are there. The dead father. The domineering mother. The peephole in the wall used to spy on sexual proclivities. The poisonous codependency. Mino's taxidermy hobby. All ripped from Hitchcock (also, the arrival of Daniela on the scene is as much a nod to Pierre Boileau, Thomas Narcejac and Hitchcock as it is a useful device for drawing the film to a close). But it isn't just visual and narrative homages. Along for the ride is the same kind Freudian psychobabble, the kind most modern psychologists laugh at, that Hitchcock loaded into PSYCHO. As a result, the psychology side of things sometimes feels a bit too corny and simplistic. Mino doesn't really go mad. He goes movie mad, with his insanity revealing itself through laughing fits, bulging eyes and periodic sobbing. When these moments happen, its almost as if THE THIRD EYE becomes some other film entirely.

And that's because THE THIRD EYE is actually a damn fine bit of calculated filmmaking. It's a somber, almost hypnotic film, one with a subdued, borderline claustrophobic atmosphere. For a film made in 1966, some of the more darker moments, like the gutting of a bird or a last act fatal stabbing, are really quite disturbing, easily matching some of the more memorable horror-esque moments from the best of the 1970s gialli. Nero's wide eyed theatrics whenever he has to slip into Mr. Hyde mode run so counter to the environment they're set in, that they just come off as, frankly, quite idiotic.

But then you have Marta, played by the wonderful Gioia Pascal. She is every inch the monster Mino is, directly responsible for the murder of Laura, indirectly responsible for every woman Mino brought home with him. Pascal's performance easily places her among the top giallo villains of all time. While Nero goes ham with his mannerisms, Pascal chills the blood with little more than an unblinking stare. Her performance is understated and controlled, delivered with a diamond cutter's level of precision.

And really, you could extend that praise to both Guerrini and his creative team. Outside of Nero's movie madman moments, there isn't a single missed beat in THE THIRD EYE. Not a single misstep. At 98 minutes, the film is paced perfectly, never wasting its running time on half thought through subplots or extraneous characters (I believe there are only eight or nine speaking roles in the entire film). If you're looking for a model of efficiency, look no further.

THE THIRD EYE did well at release, probably bolstered by Nero's quickly rising star power. The same year Guerrini's film hit the theaters, Nero landed a box office hit with DJANGO. THE THIRD EYE would go on to inspire more than a few gialli of the 1970s, most obviously Emilio Miraglia's THE NIGHT EVELYN CAME OUT OF THE GRAVE, a film which uses enough of Guerrini's narrative that it probably should be classified as a rip-off (though a damn good one). But the oddest film THE THIRD EYE influenced was Joe D'Amato's nasty vomitorium, BEYOND THE DARKNESS.

You could probably go as far as to label D'Amato's film a remake. Very little was changed. All the core narrative developments are there, as is the Freudian psycho-nonsense. The subtleties have all been gutted though (pun intended) and replaced with nauseating violence, and the overall experience is more blackly comedic than quietly disturbing, but… It's all there. Just don't mistake BEYOND THE DARKNESS for a decent substitute. THE THIRD EYE is a damn fine film, one of the best gialli of the 1960s, and is not to be missed by serious fans of the filone.