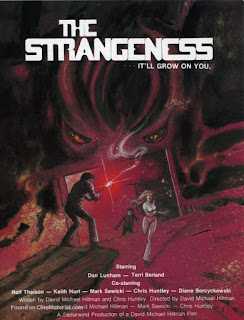 David Michael Hillman's 1985 snoozefest THE STRANGENESS begins with two idiots attempting to surreptitiously blast open a sealed over entrance to the Golden Spike Mine, a long abandoned gold mine located, well, somewhere in America. The fact that they've been instructed to do this in the middle of the night by some mysterious, unnamed individual is our first clue that something not quite kosher is going on here. Our second clue is that a few minutes after achieving their goal, some snarling, unseen beastie drags our two idiots into the darkness, silencing their horrible line delivery once and for all.

An unspecified amount of time later, Myron Hemmings, a seemingly well off corporate type, leads a small group into the mine on a bit of an expedition. Along for the ride is Dan, a writer interested in the supernatural tales of monsters and death that have sprung up around the mine since its closing years back, and his hot blonde photographer wife, Cindy. There's also Angela, a geologist whose work equipment consists of nothing but a magnifying glass and a ball-peen hammer, and Morgan, a heavy drinking prospector with an ever-changing accent. Rounding out the group are two spelunkers, Tony and Geoff, the latter being a bit of a creeper who takes a shining to Dan's hot wife.

So why was the mine closed all those years back? Was it a labor dispute? Was it ghosts? Was it a giant penis-headed vagina monster that spews acid?

If you guessed it was because the mine is indeed home to a giant penis-headed vagina monster, pat yourself on the back because you guessed right. After a cave in traps them deep inside the mine, our cast of do-nothings find themselves wandering in the dark tunnels while the pecker-faced pussy beast bumps them off one by one. Oh, and the person that paid our two pre-credit sequence idiots to open up the mine? Yeah, that was Hemmings, adding one more threat to the mix. Will anyone survive the night in the mines, or will they all end up dead, either at the business end of a pickaxe or in a puddle of corrosive vaginal mucus spermy stuff?

Let me get this out of the way first. This movie is horribly paced. Not counting the pre-credit fodder, we have to wait approximately 60 minutes before a single person kicks the bucket. That's 60 minutes of characters wandering in the dark doing absolutely nothing. We get to see Angela knock a rock off the wall and sniff it. We get to watch Geoff throw multiple passes at Cindy. We get some terrible moments of humor from both Dan and Morgan, and that's really about it. Sure, there are some attempts at building atmosphere by having characters talk about Native American legends surrounding the mine or about how dozens of people have died in the tunnels they're now walking through, but that doesn't really add much to the film. In fact, it makes the long wait worse. It fills your head with all these great possibilities.

And then nothing. Just people walking and talking, shining flashlights, periodically lighting flares. It becomes clear as the film goes on where Hillman and Co. took their inspirations from. There's quite a bit of ALIEN here. There's more than a little John Carpenter's THE THING here. But the slow start of Ridley Scott's film is justified by the atmosphere of LV-426 and the mystery of the crashed alien space ship. THE THING gives us the destroyed Norwegian camp full of charred corpses. There's nothing like that in THE STRANGENESS. It's just rocks and darkness. No attempt at building a mythology. No finding a room full of bones or weird, alien-like constructs. Just nothing piled on top of nothing.

When the monster stuff finally kicks in at the 60 minute mark of this 90 minute movie, things perk up a bit, if only because the stop motion monster is absolutely, awesomely hilarious to behold. It's a mess of tentacles with a body that looks like it's made of brains. It's phallic head has a vagina shaped mouth that spits goo everywhere. Unfortunately, most of the kills occur off screen, robbing us of any kind of gruesome pleasures. There is however one showstopper of a death that actually made me cheer out loud. It's a scene this film desperately needed (actually, it needed about four more scenes like it) and when that moment happened, I felt genuine love swell in my cold, dead heart. But that scene had the unfortunate side effect of also amplifying my disappointment with the film. THE STRANGENESS could have been a great time. It could have been so much better.

I suppose it was a mix of budgetary constraints and lack of resources that killed the film. The pieces are all there. As evidenced by MY BLOODY VALENTINE, a mine is a great setting for a horror film. I loved the way the film was primarily lit using nothing but diegetic light sources like flares and flash lights. I love the absurdity of the monster. I even love the obvious Carpenter inspired soundtrack. But the film doesn't do much with those elements. The Hemmings subplot (another clear nod to ALIEN) goes nowhere, the monster is never explained, the setting is never properly utilized, and the lack of on screen violence feels like a cop out. It is just a bland, forgettable experience from start to finish.

Wait. Make that “from start to 60 minutes”, because even though the final 30 minutes are not particularly great, they at least contain a glimpse of just how entertaining this film could have been had the filmmakers had a few more bucks in the bank. If you just skip to the one hour mark and ignore everything that came before, THE STRANGENESS might just do the job for you. But even that sounds like the faintest of praise. Because let's face it, if you have to throw out two thirds of a film just to enjoy it, maybe it isn't even worth consideration in the first place.
Posted by David Grant at 1:24:00 AM
Email ThisBlogThis!Share to TwitterShare to FacebookShare to Pinterest
Labels: Horror, Monster movie, Sci-Fi, The Strangeness