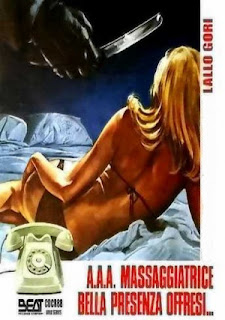 A.A.A. MASSEUSE, GOOD-LOOKING, OFFERS HER SERVICES is a strange title, but honestly, it’s a strange movie. This 1972 giallo, co-written (along with Mila Vitelli Valenza) and directed by one of the worst spaghetti western filmmakers around, Demofilo Fidani, feels like someone spilled their coming-of-age story all over a murder mystery novel then tried to dry it off with a copy of The Feminine Mystique. It’s that last bit that makes this film so interesting. A.A.A. MASSEUSE, GOOD-LOOKING, OFFERS HER SERVICES is a real giallo rarity, a film made from a feminist angle. It might not have the tenacity of argument to satisfy even a wildly intoxicated Betty Friedan but hey… You don’t get giallo films like this all that often and I’m more than happy to give Fidani some credit for the attempt.

A.A.A. MASSEUSE, GOOD-LOOKING, OFFERS HER SERVICES (and yes, that is as awkward to type out as it is to say) follows Christina, a headstrong 18 year old desperate for independence from her overbearing father. She strikes out on her own, staying with her close friend Paola. Christina begins placing ads in the local papers, referring to herself as a “masseuse”, which is apparently a code word for “call girl”. Her supple figure and striking good looks attracts a local, well-off pimp named Oskar. Oskar begins hooking her up with some his wealthy clients, including a professor and a jeweler. One small problem. Every time she “services” a client, someone decked out in black arrives shortly thereafter to cut their throats. This catches the attention of the local police and Christina is soon picked up. They don’t believe she is the killer, but are certain that whoever is to blame for these deaths is someone very close to her.

Now there is no denying that A.A.A. MASSEUSE, GOOD-LOOKING, OFFERS HER SERVICES is as accurate a portrayal of prostitution as PRETTY WOMAN, but my interest in the narrative has less to do with realism and more to do with just how odd the film feels within the giallo catalog. Normally in these films, prostitute characters are considered easy victims by the killer and easy targets of visual stimulation by the director. Prostitute characters are lined up to be disrobed and disemboweled for no other reason than satisfying the visceral thrills of the audience. They are nothing characters, treated like objects for the camera because, and let’s be honest here, most people think of prostitutes as little more than objects already. They’re treated the same way as fashion models in these films. Dressed up or fucked, it’s no different. These characters are no more than objects placed around the film like erotic mise-en-scene so that the men will have something to do with their hands, straight razors and dicks.

Christina (portrayed here by Paola Senatore) is not the most well-rounded character ever. Her entire personality seems to revolve solely around the idea that she can take care of herself, that she doesn’t require help, that she is no one’s responsibility but her own. While it is true that Fidani’s camera traverses nearly every inch of Senatore’s naked body every chance it gets, the narrative never once reduces her to a mere object, even though the male characters we are meant to identify with (Christina’s overly-protective, domineering father, her lovelorn, obsessive boyfriend Marco, and Paola’s sexist, verbally abusive boyfriend Franco) certainly do. They are presented as less than caring individuals, more concerned with their personal affronts to Christina’s line of work than with any harm that may befall her as a result of it. In fact, one of the best reversals in the film is the fact that the only people that treat Christina like an autonomous individual are her clients. Even her pimp, hot to jump her bones, doesn’t place his hand back on her thigh after Christina removes it. So while the more "respectable" types (hard-working father, student boyfriend, tough guy male) all treat Christina as something to be protected, controlled or caged, the less than "respectable" types simply accept her for who she is. And so does the narrative. It never once punishes her for speaking her mind, refusing male attention or having an orgasm.

The film adheres to several strands of feminist thought regarding prostitution, probably best summed up by Jacquetta Newman and Linda White as the ideas of the Outlaw Perspective and the Sex Work Perspective. In A.A.A. MASSEUSE, GOOD-LOOKING, OFFERS HER SERVICES, prostitution is looked at as a life choice, not a vice and as legitimate expression of sexual freedom, not something to be punished. Another reversal in the film, one that plays rather heavily in its conclusion, is that the people being murdered are not prostitutes, but rather the men who have sex with them. The murder of sexually promiscuous women in the giallo film reflects the strikingly puritanical, conservative nature of Italian genre film at the time. These were movies that promised you skin, gave you what you desired and then struck down women as a kind of moral recompense. Here, that puritanical conservatism, that loathing of women’s sexual freedom, is placed squarely on the heads of men. The kindly professor, the quiet jeweler… these men are struck down not for enjoying sex (like women are in these films), but for encouraging the loose sexual mores of modern women. While it would have been an even bigger reversal of genre norms to have NO ONE killed as recompense for anything, this bit of the narrative does highlight the absurdity of the usual (not quite) moral grandstanding of the giallo film. The killer in the closing moments explains that he simply couldn't kill Christina so he had to kill someone else. Who better to kill than the people who treated her like a human being capable of making her own choices?

This reversal alone would make A.A.A. MASSEUSE, GOOD-LOOKING, OFFERS HER SERVICES worth watching just as a genuine curio piece in the usual male-centric, machismo-minded world of the giallo, but the film has more than enough positives to warrant a look. The staccato editing, the convincing breeziness of the performances, the surprisingly assured direction and the playful Coriolano Gori score are all worthy of praise, but really, the most noteworthy detail about the film is its screenplay. For those not well versed in the giallo, A.A.A. MASSEUSE, GOOD-LOOKING, OFFERS HER SERVICES will probably feel slight and underwhelming, but if you’re like me, someone who has spent countless hours wallowing in the excess and cynicism of the giallo, the more forward thinking elements of the script, along with the reversals and slight parodies of genre conventions, will feel remarkably fresh.
Posted by David Grant at 9:16:00 PM
Email ThisBlogThis!Share to TwitterShare to FacebookShare to Pinterest
Labels: 31 Days of Horror, A.A.A. Masseuse, Giallo, Good-Looking, Offers Her Services