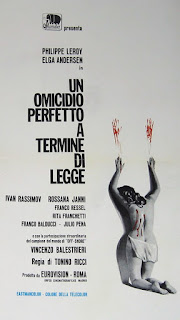 Here’s a rarity for you, Tonino Ricci’s 1971 giallo thriller UN OMICIDIO PERFETTO A TERMINE DI LEGGE, strangely re-titled outside of Italy to CROSS CURRENT. The film follows Marco Breda, a middle-aged wealthy man suffering from partial amnesia after receiving a head injury during a boat racing accident. Retiring to his villa for recovery, Marco is joined by his lovely wife Monica, her much younger sexpot friend Terry, Marco’s boat racing rival and best friend Tommy, and Burt, the man in charge of Marco’s relatively successful business empire. Marco’s recovery isn’t aided by his constant and confusing memories of someone being gravely injured in a fall from the hideous tree in the front yard. Worse, his ex-gardener is found strangled to death and run over just hours after Marco received a phone call from the man urging him to come alone to a meeting in the middle of the night. Certainly, Marco isn’t to blame, right? He couldn’t be. But why did Monica see him leaving the villa after midnight, something he only vaguely remembers doing, and why is the front of their car damaged?

It becomes apparent that something quite sinister is going on when Tommy is disemboweled and dumped into the river after snooping around Marco’s boat, the same one he was captaining during the crash. Marco soon shacks up with Terry, causing his wife to attack her in a jealous rage. When Monica is accidentally shot to death during the scuffle, Terry and Marco dispose of her body. Shortly after, the police finally drag poor Tommy’s corpse from the river and Inspector Baldini pays Marco a visit to inform him of the bad news. As he tries to deflect the Inspector’s questions about his wife’s whereabouts, Marco is shocked to discover the Monica is still alive, standing behind him in the room as if nothing happened. The shock causes Marco to speed off, the police in pursuit. The chase ends when Marco drives his car off a cliff, disappearing into the water below, killing himself.

And that’s just the first hour. The final 20 or so minutes is when CROSS CURRENT ditches any attempts at playing straight and just gives in to delirious absurdity. This is THE NIGHT EVELYN CAME OUT OF THE GRAVE meets DIABOLIQUE, a completely lunatic dive straight down the rabbit hole of nonsense, and man, is every minute of it just solid gold. While the finale of CROSS CURRENT stretches credulity to its absolute limits, the double-triple-quadruple crosses at the end of this film are precisely what made the giallo such a joy to watch. Not content with one simple resolution (read: one that makes sense), the film presents us with a series of climaxes that dish out poetic justice and yummy, yummy irony with gleeful abandon. There is always a sense of triumphant finality when the bad guys get what’s coming to them and CROSS CURRENT certainly delivers the goods with a wonderfully orchestrated slow motion bullet bath for a character, a punctured skull for another, a cheating of death that rivals Indiana Jones in a refrigerator for both absurdity and cheesy awesomeness, and a sneering backhanded bitch slap to the incompetent cops that should have figured this all out 45 minutes ago. The only way this finale could be more sardonic is if the theme song for THE CANDY SNATCHERS was playing on the soundtrack the whole time.

It’s a damn pity that NoShame Films and other DVD distributors like it have all but disappeared these days because CROSS CURRENT definitely needs a scrubbing off and proper distribution. Even in the grubby fullscreen VHS rip I watched, it is obvious that the film was made with a great deal of style. There’s a real Gothic horror element at play in the film, most evident when Marco wanders around the house and garden in the middle of a horror movie thunderstorm. The gardener’s death is preceded by a very skillful stalking sequence, Ricci doing an excellent job at both misdirection and hyperbolic exaggeration of various giallo visuals like light dancing through colored glass, swiftly moving shadows and a pair of unblinking, menacing eyes in the darkness. While the violence of display is rather tame, some are done in glorious Fulci fashion with intestines spilling out of stomachs, a treat for those who prefer their violence a bit more on the saucy side.

The performances are all top shelf as well with the always enjoyable Philippe Leroy as Marco, Elga Andersen as Monica and Rosanna Yanni as Terry. As someone familiar with those actresses and their *ahem* bodies of work, I found their casting here quite interesting, with the usually nude Yanni relegated to prude status and the normally less sexual Andersen morphing into a glamorous temptress as the film went on. Ivan Rassimov, whose presence is a giallo is virtually a spoiler warning in and of itself, is always a welcome sight, one of the few giallo actors that could manage to turn a throwaway role into a memorable character. Toss in a playful Giorgio Gaslini score, some questionable psychology and enough J&B to drown the whole of Central Europe and you have a giallo that pushes all the right buttons without overstaying its welcome or confusing its plot mechinations for serious business.
Posted by David Grant at 7:20:00 PM
Email ThisBlogThis!Share to TwitterShare to FacebookShare to Pinterest
Labels: 31 Days of Horror, Cross Current, Giallo, Un omicidio perfetto a termine di legge