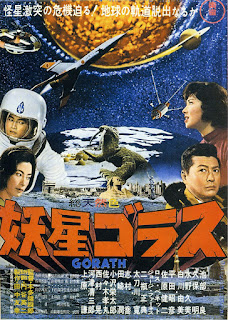 Though GORATH is not a Kajiu film (despite the late arrival of the walrus-like giant monster known as Maguma, only included in the film so producer Tomoyuki Tanaka could enhance the advertising and audience potential), you’ll find yourself again having to swallow a lot of ridiculous nonsense in order to enjoy it. Gorath is the name given to a large red star zipping through the cosmos on a collision course with Earth. A true astronomic anomaly, Gorath is less than half the size of Earth but nearly 6,000 times its mass, resulting in the star acting like a cosmic vacuum sucking up debris as it goes. After two attempts to study Gorath fail, the Japanese scientific community rallies the UN to accept its survival plans.

A multi-national coalition creates a large bank of atomic jet propulsion engines on the South Pole. Those engines produce enough force (nearly 7 billion pounds of thrust) to move the Earth out of its orbit. Although Gorath eventually destroys the moon and causes an untold amount of devastation to the planet, scientists are successful in moving the Earth well out of its orbit, allowing Gorath to pass by without collision. Right before the credits roll, an American scientist suggests maybe putting the planet back in place right before some voice over narration tells us that we’re better off putting differences aside and working together to save the planet from now on. Kumbaya.

Though it takes cues from Rudolph Mate’s religious allegory WHEN WORLDS COLLIDE, Ishiro Honda’s film, written by tokusatsu regulars Takeshi Kimura and Jojiro Okami, is missing the humanistic, dramatic elements that made Mate’s equally ridiculous film that much more potent. Instead of focusing on the people of Tokyo facing their doom, we are instead privy to the thoughts and actions of military and scientific types, busy crunching numbers, arguing and building contraptions. Nearly two thirds of the running time is spent watching busy men get busy with the plot points, designed to maximize tension, all involving machine failures, the collapse of the original South Pole research facility into a chasm, and the sudden arrival of a monster that can only be dispatched through laser fire. Meanwhile, everyone in Tokyo seems to have just accepted the fact that everything is going to be OK. No one seems worried at all about things possibly going wrong, despite the constant warnings that Gorath, even if it doesn’t collide with the planet, will cause massive devastation.

The film does make a late attempt at injecting a human component into the film with the struggles of a young astronaut named Kanai who has lost his memory during a stressful near death encounter with the rogue star, but it’s too little, too late, as the character was previously regulated to secondary status during the first two thirds of the film. There is a brief moment of real human tragedy where one of the lead scientists tells his family that the UN will no longer put any effort into avoiding the collision because they realize that nothing can stop the impact. But again, it’s just a single scene, dropped at the first edit and never supported again in the narrative. Ultimately, it’s this lack of any real human component that reduces GORATH from a good film to a perfunctory one. The film looks good, sounds great, is carried out with real professionalism, but it is simply too hollow to create any kind of genuine drama or interest.
Posted by David Grant at 5:10:00 PM
Email ThisBlogThis!Share to TwitterShare to FacebookShare to Pinterest
Labels: 31 Days of Horror, Gorath