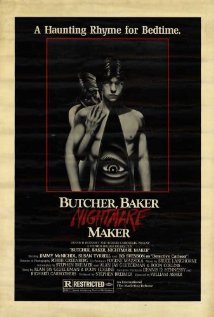 Here we have the strangely titled BUTCHER, BAKER, NIGHTMARE MAKER, a bizarre slice of reverse-Oedipal horror from 1982. The film follows Billy, a 17 year old high school basketball player who was adopted by his now-overbearing aunt Cheryl when his parents died in a car accident 14 years ago. Billy desperately wants to get out and live life on his own. He has a nice shot at a full athletic scholarship from the University of Colorado. His aunt, however, isn’t hearing any of it. She’s already threatened by Billy’s girlfriend Julia and as far as she’s concerned, any talk of leaving for college is off the table. It becomes apparent by the 15 minute mark that Cheryl has some unnatural feelings for young Billy, sneaking into his room to wake him up for school by caressing his body with her fingertips, purring like a cat. Billy, either unwilling or too stupid to notice her come-ons, just goes about his days, trying to live a normal life, even forging a friendship with his basketball coach.

When a repairman named Phil comes over to the house one evening to service their television, Cheryl throws herself at the clearly disinterested man. Infuriated by his rejection, Cheryl stabs him repeatedly. By the time Billy arrives home, Phil is dead and Cheryl is in hysterics, screaming that Phil had tried to rape her. Cheryl’s busy-body next door neighbor Margie arrives and calls the police. The detective that responds to the scene, the hyper-homophobic Joe Carlson, doesn’t buy the story. He thinks Billy killed the man. He believes that even more when he finds out that Phil was gay and in a relationship with Billy’s basketball coach. For Carlson, the motive is clear. Billy was having sex with his friend the coach and Phil found out about it. Billy then killed Phil during a confrontation.

One of Carlson’s fellow officers, Cook, doesn’t buy that bullshit. For Cook, Carlson’s hypothesis is born from bigotry, not evidence. As Carlson looks for any way possible to destroy Billy’s life, Cook begins digging deeper into the history of both Billy and Cheryl, discovering strange rumors and evidence that suggests that what happened to Billy’s parents wasn’t just an accident, that there may be much more to Cheryl than meets the eye.

That’s a pretty meaty set-up for a simple thriller, right? Well, that’s because BUTCHER, BAKER, NIGHTMARE MAKER is far from simple. The film is fairly well plotted with a careful escalation of craziness that allows the film to really build properly to a balls-out conclusion. The entire film rests on the shoulders of Susan Tyrrell, a remarkably engaging actress that never quite achieved mainstream success despite being downright amazing in a string of films like FAT CITY, TO KILL THE KING, Burt Kennedy’s 1976 adaptation of Jim Thompson’s disturbing noir THE KILLER INSIDE ME and the fantastic should-be-a-double-bill of FORBIDDEN ZONE and BIG TOP PEE-WEE.

Her performance as Cheryl is just jaw-droppingly weird, swerving wildly between bumbling seductress and raging lunatic. She keeps pictures of a man named Craig in an upstairs room, regularly engaging in angry conversation with it. She drugs Billy’s milk so he’ll fail his scholarship try out. There’s very little Cheryl won’t do to keep Billy by her side, even if it means taking a meat tenderizer to his girlfriend’s pretty face. A good bit of Norma Bates lurks inside this character and honestly, I found myself really creeped out by Tyrrell’s performance. It’s just the right amount of over-the-top that it is always entertaining to watch, but also just the right amount of obviously damaged that I never quite lost sympathy for her.

BUTCHER, BAKER, NIGHTMARE MAKER is not the campy horror film the title makes it out to be. Like AXE or UNHINGED, this is probably not the Video Nasty you want to check out for some quick and nasty thrills. Like those films, BUTCHER, BAKER, NIGHTMARE MAKER, when reduced to individual elements like pacing, performances (aside from Tyrrell, only Bo Svenson shines here), special effects quality, direction, etc., doesn’t quite stand out as anything special. But like UNHINGED, the overall effect of the film is something else entirely. It does require patience to get through it and yes, you will have to turn a blind eye to some of the films obvious narrative plot holes (like the explanation of Billy’s parentage which makes no real sense), but I can’t really say that I was bothered by any of that. This is one of those films that tells a very specific story with no real goal other than weirding you out for 90 minutes. It ends up doing that wonderfully.
Posted by David Grant at 6:37:00 PM
Email ThisBlogThis!Share to TwitterShare to FacebookShare to Pinterest
Labels: 31 Days of Horror, Butcher Baker Nightmare Maker, Nightmare Maker, Video Nasty