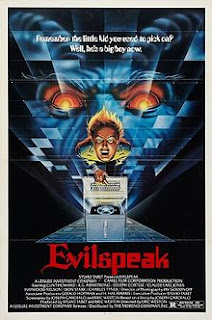 Yeah, it was well acted and really well directed, but you know what CARRIE needed? More flesh-eating demon pigs.

Well, thank god EVILSPEAK is here to correct that little oversight. Here’s a movie so frightening its opening credits are in an Old English font, the true indication that you’re about to be scared shitless. This entire movie revolves around beefy soccer players with unkempt pubic hair at a military academy ruthlessly picking on Stanley Coopersmith, a nerdy orphan whose only crime is that he’s played by Clint Howard. Coopersmith, angry and desperate to get even when the bullies tie his clothing into knots and mutilate his puppy dog, begins messing around in black magic with the help of his trusty computer, the limited edition Apple iSatan. See, way back in the dark ages, a Satanic priest named Esteban was exiled from Spain. He somehow made it over to the United States and set up shop beneath a military academy.

Yeahhhh, the film never really explains how the hell any of that happened, let alone why there’s a painting of the Satanic Esteban hanging in the otherwise Christian chapel. Anyway, Coopersmith finds Esteban’s diary and begins translating it, eventually leading him to unleash Esteban from the spirit world. Possessed, Coopersmith spends ten solid minutes decapitating the shit out of everyone he can get his hands on while demonic pigs eat the ones smart enough to run away. Then the movie just ends. Literally. It just ends.

Did ya get all that? Good, because now I want to tell you how much ass this movie eats.

It eats a lot of ass.

The problem with this film is that it takes forever to get moving. It starts well enough, I must admit, with the always great Richard Moll as Esteban. Looking a bit like Lord Saddler from Resident Evil 4, Moll chews the scenery wonderfully, but then we’re stuck with 80+ minutes of the tragically unhip Clint Howard just getting humiliated over and over and over and over again. I know the purpose of making his fellow cadets into such insufferable assholes is so we’ll relish their inevitable deaths that much more but come on, man… They’re absolutely fucking evil little shits and the film makes you wait for-frickin’-ever before heads start to roll. Meanwhile, the iSatan is sitting there flashing “HUMAN BLOOD” over and over again but Coopersmith is too damn stupid to figure out what that means.

For that matter, why the hell does he even need to complete the ritual? When Coopersmith is accosted by the drunk caretaker (played with gusto by the always entertaining R.G. Armstrong), the iSatan telekinetically twists the old man’s head around 180 degrees. A little later, it spawns a small army of demon pigs to eat a naked woman alive in the shower (writer/director Eric Weston was clearly a big fan of Mark 5:1-13). There are moments when the computer just has a massive freak-out with Atari-level special effects just zipping all over the monitor screen. This usually happens when Coopersmith is just sitting there looking at it. It’s like the iSatan is so insanely frustrated with Coopersmith’s inability to grasp simple commands like “HUMAN BLOOD” that it’s throwing a temper tantrum.

Now I will admit that the final 10 minutes are absolute gold. Watching Clint Howard float through the air with a large prop sword is comedy perfection. The obviously fake demon pig heads that chomp down on obviously fake limbs are great as well. But you do end up feeling a bit robbed by the ending. This is a movie where Coopersmith has been beaten up, forcibly stripped, had his somewhat impressive engineering work destroyed and had his goddamn puppy sliced wide open but the majority of the carnage is carried out by those fake-as-fuck pig heads. Even the lead asshole of the group gets killed by the reanimated corpse of the caretaker, not the guy whose life he made a living hell for 85 minutes. It’s kind of a cheat, you know? I wanted more Flying Coopersmith of Death and less loudly grunting puppets.

In a way, that basically sums up my feelings on EVILSPEAK. I wanted more evil but all I got was more speak.
Posted by David Grant at 8:38:00 PM
Email ThisBlogThis!Share to TwitterShare to FacebookShare to Pinterest
Labels: 31 Days of Horror, Evilspeak, Video Nasty