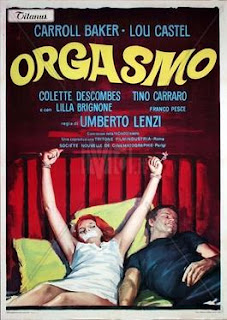 It is rather eye-opening just how different giallo films were before Dario Argento codified the sub-genre in 1970 with his debut film THE BIRD WITH THE CRYSTAL PLUMAGE. Free from the massively successful formula Argento cooked up using elements of Mario Bava’s THE GIRL WHO KNEW TOO MUCH and BLOOD AND BLACK LACE, the early gialli were often strange and experimental, like DEADLY SWEET and DEATH LAID AN EGG, or comfortably melodramatic, like LADY OF THE LAKE and A BLACK VEIL FOR LISA. Several gialli took their narrative inspiration from Romolo Guerrieri’s THE SWEET BODY OF DEBORAH, ditching the typical murder mystery angle and delving into sordid tales of dangerous romantic entanglement, blackmail and madness.

The oddly titled ORGASMO (re-titled to PARANOIA outside of Italy) is one such film. Directed by Umberto Lenzi (yes, the same Umberto Lenzi who would later go on to direct CANNIBAL FEROX), ORGASMO features Carroll Baker as Kathryn West, a newly widowed 40-something who has just moved to her dead husband’s family estate in Italy. The palatial villa, staffed by the housekeeper Teresa and the deaf groundskeeper Martino, provides her with solace, though she finds more comfort in the bottle than anything else. One day, a man arrives at the front gate, asking for some tools to fix his car. The man’s name is Peter and Kathryn takes an immediate interest in him with the two quickly entering into a passionate sexual relationship. Peter doesn’t seem to care much about Kathryn’s millions, even telling her to give it all away, but not to the poor, to someone rich because “we don’t want to create more rich people than there already are”.

Peter’s influence over Kathryn soon turns troubling with the arrival of Eva, a beautiful young woman Peter says is his sister. They convince Kathryn to get rid of Teresa, plying her endlessly with compliments, attention, drugs and alcohol. When Kathryn returns from a meeting with her lawyer Brian, she finds Peter and Eva in bed together. She forces them to leave but the pair soon returns, eager to take over Kathryn's life. They blackmail her with pictures of Kathryn and Eva in bed together, the result of a night full of drinks and drugs. Fearful of the attention, Kathryn relents, giving run of the estate over to them. Having successfully ingratiated themselves into the home, they begin driving Kathryn to despair, extreme alcoholism and finally to madness, pushing her ever closer to suicide.

You might want to classify ORGASMO as a home invasion film before you would think to label it as a giallo. The early gialli were largely not, as the later films largely were, murder mysteries. They were crime thrillers, as obsessed with blackmail and extortion as they were with deviant sexuality and bloodletting. If my summation of ORGASMO strikes you as more of a perverse melodrama than a tried-and-true giallo, I wouldn’t be surprised, but the film does reveal itself to be something much more familiar during its closing moments. The film packs a triple twist ending, one that piles transgression on transgression even as it doles out poetic justice with the all the force of God destroying Sodom and Gomorrah. The ending is reminiscent of the finale of Sergio Martino’s exquisite YOUR VICE IS A LOCKED ROOM AND ONLY I HAVE THE KEY, a giallo film which like ORGASMO explores the violence that lay along the fault lines of generation gaps, class demarcations and unhealthy relationships. Reducing ORGASMO down to a “money corrupts all” message is an oversimplification of Lenzi’s film. ORGASMO is, above all else, an all-out attack on prestige and complacency, the result of wealth to be sure, but also the product of a society that deems money to be the root of all happiness.

Kathryn doesn’t seem to care about her wealth, purposefully hiding away from the public eye in Italy and even actively seeking to liquidate the assets she gained when her husband passed away. What she wants is affection. Peter likewise has no taste for money, throwing mini-temper tantrums whenever Kathryn offers to pay his debts. This reversal of the greedy classism so typical in giallo films is one of the most refreshing aspects of ORGASMO and while the twist ending is satisfying on a visceral level, it ultimately reduces the film to something more blackly ironic than it needs to be or even should be. Without outright spoiling the ending, ORGASMO ultimately becomes the kind of film it tried desperately not to be, a simple exercise in destructive greed that reverses its own reversals, rendering it again satisfying on a visceral level but less than ideal on an intellectual level.

But as problematic as the ending may be, the proceeding hour and some odd minutes are incredibly engaging, if you’re willing to endure their more groan-inducing, overly dramatic moments. As she did in THE SWEET BODY OF DEBORAH, Baker gives a calculated, understated performance and Lenzi, much more adept at classy thrillers than blood and guts horror, turns in a film packed with visually stunning moments and tense, suspenseful sequences. ORGASMO was the first of three giallo films Lenzi would make with Baker, the other two being SO SWEET… SO PERVERSE and A QUIET PLACE TO KILL, and this trilogy, while a tad bit redundant, serves as a great place of entry into the somewhat softer, definitely more intimate side of the usually confrontational giallo film. For seasoned veterans of the more Argento-esque giallo, ORGASMO will probably be too anemic, but for those looking for a bit of subversive psychology to go along with their J&B-laced thrills, the film is a nice treat.
Posted by David Grant at 7:06:00 PM
Email ThisBlogThis!Share to TwitterShare to FacebookShare to Pinterest
Labels: 31 Days of Horror, Giallo, Orgasmo, Paranoia