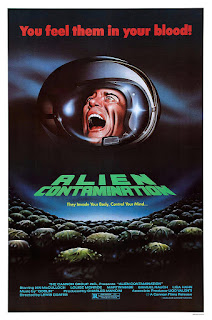 Luigi Cozzi’s CONTAMINATION is often dismissed as an ALIEN rip-off. It isn’t. Not really. It really only rips off about four seconds of ALIEN, that bit where Kane’s shirt (and stomach) explodes in a spray of blood. It’s easy to see why Cozzi was so enraptured by that moment. It’s so absurdly ridiculous and laughably grotesque that it sticks out like a sore thumb amid all the pretentiousness of Scott’s creation, a film that tries it’s hardest to bury the B-movie slasher film it really is beneath a mountain of shiny art design. I’m not a fan of ALIEN. In fact, I would go so far as to name it my pick for most overrated film of all time. It’s just a dull, boring, self-important bag of pretentious nothing that I have a hard time getting through it. Even the best slasher films, from HALLOWEEN to PSYCHO, have a hint of self awareness to them. Scott’s film tries hard to be something it simply cannot be, a serious film. It performs a kind of bait and switch, starting off as a serious minded, mysterious science fiction film only to dive head long into the slasher subgenre. Yeah, the ship is cool looking, the cast is uniformly fine and the xenomorph is amazing to behold but the film is just… well, it just isn’t fun and no amount of straight faced line delivery or pompous direction can change a movie about a man in a rubber suit chasing down people in an obviously fake spaceship into a serious work of art.

But enough about that piece of crap. What about this piece of crap? Well, CONTAMINATION starts in a way that would suggest a rip-off of Fulci’s ZOMBI. A derelict ship, full of exploded corpses, is under investigation by a group of Department of Health red shirts. They stumble across some green alien eggs, which they funnily enough think are some kind of avocado because they’ve clearly never seen an avocado before. One of the eggs bursts, spewing forth some nasty acid-like slime, and everyone just starts exploding, their chests popping like meat-filled water balloons. The only survivor, a cop named Tony, teams up with a government researcher, Colonel Stella Holmes, and together they coerce a retired astronaut named Ian Hubbard into joining their inquiry.

Turns out, Hubbard is the only surviving member of a two-man expedition to Mars. Discredited when no one believed his tales of finding a large cave full of green alien eggs on the red planet, Hubbard turned to booze, but now that his story has been validated, he’s all piss and vinegar, ready and willing to help crack the case. If only his partner on that fateful expedition was still alive but alas, poor Hamilton bit the dust in an accident a long time ago. Except that he hasn’t. Hamilton is alive and well, living in South America where he and his femme fatale assistant play guardians to a bona fide egg laying machine of an alien beastie. Our intrepid threesome of 40-somethings finally catch on to a connection between a Columbian coffee company and the placement of the eggs on the boat and badda bing badda bang, they quickly find themselves in the clutches of Hamilton and his Columbian pod people of doom.

CONTAMINATION is as inconsequential as any Aliens vs. Humans subplot from a GODZILLA film. In fact, if you changed the alien eggs (which don’t actually hatch anything when they pop) to a kind of viral delivery bomb and changed the cyclopean alien into a big science doohickey, the film really wouldn’t be much different. Add to that the fact that the alien eggs only pop when heated up and you really don’t have that much of a serious threat. I mean, if your weapon of mass destruction can be defeated by just putting it into a refrigerator, there really isn’t much for the audience to worry about. Marry the plot inconsistencies and general lack of tangible threat to an action narrative with little to no action and you have a film that you can comfortably sleep through. The chest bursting antics that got this film onto the DPP Video Nasty list are confined to the first 15 minutes and the last 10 minutes. Everything else is an exercise in frustration.

There are definitely things I liked about CONTAMINATION. Ian McCulloch is always fun to watch and Siegfried Rauch makes for a nice villain. The Goblin score is appropriately groovy and Cozzi’s direction is the best he’s done since THE KILLER MUST KILL AGAIN, but the narrative is just way too padded and the action is just way too dialed back for CONTAMINATION to ever be really engaging. It’s hit and miss, mostly miss, with a few decent scenes of carnage and little more.