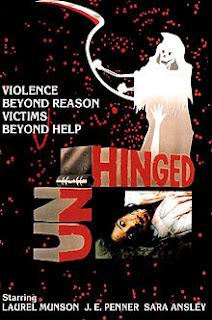 What do you get when you mix HOUSE OF THE DEVIL with The Wasp Factory? You get UNHINGED, a 1982 oddity written and directed by Don Gronquist. Virtually plotless, this tale of three pretty college students recovering from a car accident in the home of a misandrist mother and her put-upon older daughter is going to be pretty damn difficult to review. A plot synopsis would be all but useless as so much of the narrative is driven by conversations, long scenes of emptiness and sudden changes from suspense to full-blooded horror. It’s an odd film, for sure, but one that I think has more going for it than first meets the eye.

Objectively, the film is pretty poor. The acting is obvious and exaggerated. The dialogue is stilted and forced. The direction largely consists of shots of empty rooms, brooding two shots and straight-on close ups. The soundscape of the film is awash in amusement park horror house novelties like gentle rapping noises, heavy breathing and sudden footfalls. It goes without saying that the film was cheaply made and therefore looks cheap with Gronquist really trying to pull every ounce of spooky out of ordinary locations and objects. The first half hour of this barely-80 minute film will definitely test your bad movie tolerance.

But then… I don’t know… the longer the film goes on, the more the cheapness and fakeness of the film starts to work in its favor. This is a movie where the twist ending turns everything on its head. The narrative hinges on multiple deceits. Everything about the home and the family is one big lie and when you marry that kind of narrative to a film this weird, it kind of elevates the whole thing. There is a scene where one of our leads walks through the house at night while the sound of heavy breathing dominates the soundtrack. Is she hearing it with the same intensity we are? A child’s bedroom, dusty and unused, contains a rusted revolver and a machete. A shed out back holds some kind of horrible secret that we don’t get to see until the final ten minutes. One of our leads walks through the woods only to be unexpectedly killed by a masked killer brandishing an incredibly large scythe. It’s just odd moment after odd moment and the effect is heightened by the fact that EVERYTHING about this film feels odd and fake, like a great big deception being played on both the characters AND the audience at the same time.

UNHINGED is a movie I know I shouldn’t like but I do. Unfortunately, I don’t quite have the words to adequately describe the strangeness of the film. It just has this kind of surreal quality married to an exploitation aesthetic and that makes for an experience that is both frustrating and satisfying in equal measure. Does it deserve its Video Nasty status? No. Aside from a few brief moments of bloodshed, a horribly depressing finale (including one of the best “find the dead friends” moments in all of horror) and some gratuitous full frontal nudity, there isn’t much to moralize about here. What is here though is a really bizarre atmosphere that has the ability to slowly draw you in. UNHINGED is not first class horror but I honestly believe it is unfairly maligned and deserves to be rediscovered by a fresh audience.
Posted by David Grant at 7:07:00 PM
Email ThisBlogThis!Share to TwitterShare to FacebookShare to Pinterest
Labels: 31 Days of Horror, Unhinged, Video Nasty