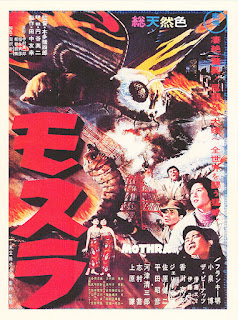 After the lukewarm response to VARAN THE UNBELIEVABLE, Toho would produce its most approachable Kaiju film to date. Based on a novel by Takehiko Fukunaga, Shinichiro Nakamura and Yoshie Hotta titled The Luminous Fairies and Mothra, MOTHRA would ditch the world weary, confrontational tone of the previous films and dive headfirst into escapist fantasy. Adapted by soon-to-be GODZILLA franchise regular Shinichi Sekizawa, MOTHRA is kind of like an inverse KING KONG. Toho’s desire to make a KING KONG film was well known and with the aptly titled KING KONG VS GODZILLA still a few years off, producer Tomoyuki Tanaka and director Ishiro Honda found themselves the next best thing, delivering a film closer to Cooper and Schoedsack’s 1933 classic than either of Toho’s later Kong related films.

When four survivors of a typhoon are washed ashore on Infant Island, believed to be a radiation dead zone, their rescuers are surprised to learn that none of the four men are suffering from radiation sickness. They’re even more surprised to learn that there are natives living on the island. A nasty capitalist named Nelson, a well-off and sinister entrepreneur from the fictional country of Rolisica, heads a scientific expedition to the island, unaware that a reporter named Fukuda has snuck aboard the ship. While out searching the island, an anthropologist named Chujo is attacked by a large vampiric plant. All hope is lost until Chujo is saved by two women, each standing about a foot tall.

After recovering, Chujo takes the rest of the team out to the jungle, introducing them to his mini-saviors. Nelson immediately spots an opportunity for some quick cash and attempts to kidnap the women, known by GODZILLA fans as the Twin Fairies. The sudden arrival of the natives changes Nelson’s mind. He releases the Twin Fairies and the crew returns to the ship, leaving for Tokyo the next day. Nelson however returns to the island a short time later, kidnapping the Twin Fairies and gunning down several dozen natives.

Nelson puts the Twin Fairies on display in a gaudy performance theater, reaping handfuls of cash from audience attendees. Chujo, Fukada and his photographer friend Hanamura repeatedly ask Nelson to release the Twin Fairies but he refuses. He does however allow them to speak with the captive Fairies. Although the Fairies have no discernible language, they are able to telepathically communicate with our heroes, telling them that their village god Mothra will be coming to rescue them and that Mothra will unleash devastation upon the city when she arrives. When Fukada runs a story in the newspaper declaring that Nelson is forcing the Twin Fairies to perform against their will, he threatens to sue, but that is the least of his concerns. Back on Infant Island, the giant Mothra egg has hatched and the village god, still in larvae form, has begun her journey to Japan.

The military attempts to stop the beast but fails. Mothra emerges from Tokyo Bay, crawling into the city and leaving a trail of destruction behind her. She eventually cocoons herself to the side of Tokyo Tower as Nelson flees to Rolisica with the Twin Fairies. Mothra emerges from her cocoon in adult form and flies off, leaving Chujo, Fukada and Hanamura desperate to find Nelson and return the Twin Fairies to the rampaging Mothra.

The allusions to KING KONG should be obvious, but MOTHRA lacks the subtextual depth of Cooper and Schoedsack’s film. Yes, it has the unmistakable whiff of anti-capitalist, anti-imperialist subtext, but that comes more from the film being patterned after KING KONG than anything else. MOTHRA was designed as audience friendly escapism and for the better part of the film that works wonderfully. So wonderfully in fact that it’s a tad depressing when the film begins to work politics, slander suits and other bits of adult drama into the story. Much like STAR WARS EPISODE 1: THE PHANTOM MENACE with its endless discussions of trade embargoes and behind-the-scenes politicking, the more serious dramatic bits clash with the Saturday morning cartoon atmosphere, rendering much of MOTHRA confused and tonally inconsistent.

There are other problems too, one being the geographic confusion caused by Nelson and his home country of Rolisica. Simply put, Rolisica is the United States. There’s no denying that. When the film shifts to Rolisica, all the street signs, store fronts and billboards are in English. All the people walking the streets are your typical American types played by your typical American actors. The wonderfully constructed miniature sets by Eiji Tsuburaya look like they were modeled off of post cards of Manhattan. This city is called New Kirk City. Now I’m not one to complain about anti-American sentiment in films, but all of this seems to be a not-so-subtle jab at the consumerist country with its past filled with slavery.

One of the major plot points in the film revolves around the embassy in Rolisica declaring that Nelson holds “property rights” over the Twin Fairies, the two (kinda-sorta human) beings Nelson took by force from their homeland so he can exploit them for his own gain. This too is straight out of KING KONG, a movie which is about a bunch of white men who kidnap a threatening ape and transport it back to America in the bowels of a ship so it can be exploited for material gain. I think you see where I’m going there. But KING KONG was a very socially aware film on top of being escapist entertainment. MOTHRA, if anything, feels like escapist entertainment with a small amount of social commentary lodged clumsily in its guts. It would have been easier to swallow (and easier to enjoy) had the film just come right out and said what was on its mind instead of dancing around.

Leaving aside the geographic confusion of exactly where Rolisica is supposed to be (it is apparently only a day’s flight from Tokyo), the unnecessary inclusion of a subplot involving Chujo’s age-improbable little brother, and an ending that is both anti-climatic and more than a little religiously ridiculous, there is quite a lot to like about MOTHRA. For starters, this is perhaps the best looking Toho production of the Showa era. Tsuburaya’s meticulous miniatures are utilized to their full effect by Honda. The extensive use of rotoscoping, matte work and background projection gives MOTHRA a more intimate and immediate feel than any other Toho Kaiju movie to date. Mothra herself is an interesting (and kinda cute) creation and the attention to character in the narrative definitely makes this feel like a more active, interesting piece of work than something like VARAN THE UNBELIEVABLE which is filled with almost-characters wasting time.

But honestly, if you were looking for a Mothra film to watch first, there’s little reason to choose MOTHRA over GODZILLA VS MOTHRA, a film which works just as well as an origin story of sorts for the ultra-popular flying beastie. If you’ve seen GODZILLA VS MOTHRA, this film will feel a bit redundant, even somewhat underwhelming. MOTHRA is often listed as one of the best Toho Kaiju movies and I understand why, but for me, there's just that little something extra missing from the film. For nearly 75 percent of its running time, it is thoroughly engaging, eye-poppingly gorgeous and exciting stuff to watch, but the film quickly loses momentum and ultimately sputters out right before it reaches the finish line. Don't get me wrong, I do think this is a good film. I just don't think it stands up to the other MOTHRA films in the Toho line-up.

Posted by David Grant at 10:47:00 PM
Email ThisBlogThis!Share to TwitterShare to FacebookShare to Pinterest
Labels: 31 Days of Horror, Mothra