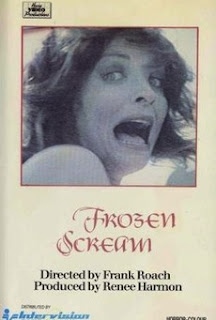 I have no idea how to go about writing this review. Trying to review FROZEN SCREAM is like trying to review a nap. It was an hour or so and nothing at all happened. The end.

Should I leave it at that? I might as well. I honestly have no idea what the hell this movie was about. I even took notes while watching it but I can’t seem to make sense of it. From what I gathered, a man named Tom is kidnapped by a cult of some kind out to achieve immortality by way of a serum. This of course doesn’t quite work as intended, changing all the test subjects into zombie-like creatures. Tom’s wife, Anne, tries to locate him, only to be targeted by the cult. A cop named Kevin shows up and so does Renee Harmon. Oh goody. As talented an actress as the tree outside my house, Harmon’s line deliveries are unintelligible to say the least, her heavy German accent combined with shoddy sound work making her sound like a bit like Karin Baal gargling marbles.

I’m not sure I can even articulate the train wreck quality of this piece of shit. You can tell the filmmakers were certain that this film would be damn near impossible to follow. They insert voice over narration at times just so the editing makes some kind of rudimentary sense. Worse, this narration occurs OVER dialogue in the scenes so the attempt to create continuity is all for naught when the characters later reference talking points we never got a chance to hear because the movie was fucking talking over them. Character motivation is all over the place too. I was sure that Harmon and her accomplice Lee James were the bad guys, but Harmon not only saves Anne at one point but ends up shooting James for no discernible reason. I just…. I mean… I can’t. I can’t make sense of this movie and it isn’t helped when Harmon tries to explain things and it sounds like “zee dis zing iz a kind of gargle gargle gargle”.

This is yet another film on the DPP Video Nasty list that has absolutely no business being on there. I mean, there IS a scene of a character getting an axe to the face, a very common occurrence in many (if not most) of the Video Nasties but no one – and I mean NO ONE – will be at all disturbed, frightened, sickened or psychologically harmed by this film. They will instead be confused, bored, frustrated and angry. At the very, very least, the DPP strike against it made it so that no one would be able to actually view this abhorrent, godawful pile of puke. So there’s your silver lining, folks. I’m not one for censorship but by fucking god, I would not bat an eyelash if this movie was erased from the face of the planet.
Posted by David Grant at 3:43:00 PM
Email ThisBlogThis!Share to TwitterShare to FacebookShare to Pinterest
Labels: 31 Days of Horror, Frozen Scream, Video Nasty