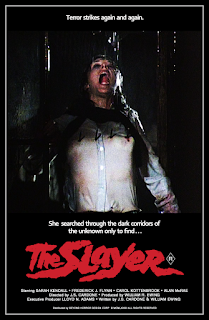 You take the good, you take the bad, you take them both and there you have THE SLAYER, an early 80s slasher-monster-rubber reality mash-up that is equal parts entertaining and catatonically dull. Good luck finding a review for this film that doesn’t contain a single reference to Wes Craven’s immortal A NIGHTMARE ON ELM STREET and honestly, they have a point. Here we have a movie about four insufferable 40-somethings, all rich and pumped full of self-importance, that take a three minute flight to a deserted island during storm season just to get murdered by something the film wisely leaves unseen until the last couple of minutes. Why is this like A NIGHTMARE ON ELM STREET, you ask? Hold on a minute.

Kay, who looks like someone stuck Sigourney Weaver and Susan Sarandon in a blender then poured the resulting mixture into a pair of ill-fitting cargo pants, is a painter whose work has hit a bit of a rough patch. Turns out art critics don’t like moody paintings of middle class suburban houses. Who knew? So her husband David, who looks like Earl Hickey if Earl Hickey was the Seaver’s neighbor on Growing Pains instead of a born again Taoist trailer park denizen (I could do this all day, in case you were wondering), decides they should take a nice weekend trip to some island in the middle of Wherever with Kay’s brother, Eric, and Eric’s wife, Brooke. Kay, ever the bag of enthusiasm, doesn’t really want to go. She’s been having nightmares that involve her being manhandled by something nasty while standing in a burning building.

But as that would mean not having a movie to watch, off they go to their island paradise (a shot of the island actually prompts Brooke to say “it’s surrounded by water” like she’s never heard of an island before).  Just before leaving them to die horrible deaths, the pilot, Mr. Marsh, does his best Crazy Ralph impression. There’s a storm coming in and he won’t be able to fly back for them until the storm subsides (even though he turns up in the middle of the storm near the end of the film because reasons). Ah, but who cares? There’s fishing to be done, rooms to sit in for whole chunks of the film, creepy crawl ways to explore in the dead of night and of course plenty of repugnant middle-aged sex to be had. Yum yum.

Without belaboring the point, it soon becomes obvious that no one really likes one another. Until they do. I mean, Kay might be depressed by her sudden change in fortunes, but everyone else is either bipolar or sociopathic. They go from friends and family one minute to screaming assholes the next, and all the while something from Kay’s nightmares begins to off them one by one. And that’s where the A NIGHTMARE ON ELM STREET comparison comes into play. See, the most interesting aspect of the script is the reversal of the usual plastic reality gag. Here, falling asleep gets OTHER PEOPLE killed. Whenever Kay takes a nap, her subconscious mind gives birth to a roving POV camera that stalks and kills the shit out of anything it comes across, whether it’s by decapitating someone with a crawl space door (which they continually call an “elevator” for some reason) or by using a fishing rod outfitted with a ginormous metal hook. These murder scenes are surprisingly well done, too, with some really decent effects.

Well, all but one murder scene, that is. The aforementioned decapitation by crawl space door makes no logical sense. The door is pushed up from below as it is cut into the ceiling of the room. So when the unknown killer slams the door shut on poor David, it should have just hit the dumb bastard in the head. Instead, it basically pins his neck against the floor and the side of the door and that just… I mean… PHYSICS SAYS NO!

But anyway, the big plot twist in the film is that Kay has been having these nightmares since she was child. Whatever boogeyman is haunting her dreams (and the film REALLY should have never shown it) even killed her kitten when she was a kid, which just proves how much of a bag of dicks it is. This led her brother (and everyone else) to think she’s a psycho nutbag and I kind of wish the film would have played up that angle more. Because THE SLAYER needed something else, some kind of extra layer of complexity to it. Honestly, this isn’t a bad film. It’s just padded out. With only four characters, the film has to take a long, long time to get going and without that added layer of complexity, all we’re left with is bickering and arguing and waiting and sleeping and all kinds of just junk filler that could have been left out to make room for something better. The writer attempts to add a third act red herring into the mix, but it doesn’t go anywhere because by that time we know what’s actually going on. So unfortunately, the film is back loaded with good stuff and front loaded with absolutely nothing interesting.

At the end of the day, would I recommend THE SLAYER? Yeah, I would. It would make a good triple feature with A NIGHTMARE ON ELM STREET and RAWHEAD REX, and it certainly contains some really nifty nightmare sequences and gory money shots. The performances are spot on, the mood is dark and spooky, and it’s sometimes nice to swap out your standard masked killer for Pumpkinhead Jr. Just don’t expect to be knocked on your ass by it. The final twist isn’t a twist, just a reiteration of the film’s theme, and the climax literally comes out of nowhere, but those are minor quibbles in the long run. Overall, there’s enough here to warrant a watch. So go for it. Be my guest. I’ll allow it.

Posted by David Grant at 4:07:00 PM
Email ThisBlogThis!Share to TwitterShare to FacebookShare to Pinterest
Labels: 31 Days of Horror, The Slayer, Video Nasty