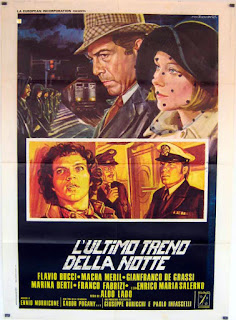 Ingmar Berman’s THE VIRGIN SPRING was the film that introduced me to the more serious side of world cinema. Before then, my diet consisted of primarily horror and actions films. I was accustomed to seeing foreign films through the work of directors like Lucio Fulci and Dario Argento, but the generally poor dubbing and surface resemblance to the American horror films I was regularly digesting made it so the “foreignness” of their origins was all but erased. THE VIRGIN SPRING, with it distinctly Swedish ambiance and slow, deliberate pacing felt positively alien to me. I fell in love with its strange angelic look, its methodical approach to character development and its naturalistic, almost documentary-like, performances. Of course, the whole reason why I sat down to watch that movie on a Wednesday evening was because of its ties to Wes Craven’s LAST HOUSE ON THE LEFT. Craven used Bergman’s film (which is itself based on a old Swedish ballad) as the basis for his plot and as LAST HOUSE ON THE LEFT was one of the rare films that absolutely shook me to my core when I first saw it a few years prior, I was anxious (in more ways than one) to witness its origins.

NIGHT TRAIN MURDERS tells the same story with enough of a resemblance to Craven’s film that it was actually released to some theaters as LAST HOUSE ON THE LEFT PART 2. I plan on giving Craven’s film a full review soon so I won’t spend too much time focusing on it here, but I will say that Craven’s film is very much about counter-culture madmen bringing their terror into suburban neighborhoods. Like NIGHT OF THE LIVING DEAD, this idea of two cultures clashing with predictable violence is of major importance to Craven’s film. What Aldo Lado does in NIGHT TRAIN MURDERS is expand that idea even further making generalized statements about how pervasive violence really is, no matter where you call home.

NIGHT TRAIN MURDERS, as the title suggests, uses a train for its primary setting. This film was released at a time when train travel was the first choice for many travelers and there’s little doubt that Lado and his co-writers chose this setting for exactly that reason. Margaret and Lisa are two students in Munich on their way to spend Christmas with Lisa’s family in Italy. They come across Blackie and Curly, two thugs who have been spending the train ride in the company of an upper class blonde (who isn’t given a name). As their behavior escalates, Margaret and Lisa leave the train during an unscheduled layover (someone called in a bomb threat) in hopes of getting away from the troubling threesome. The young ladies board another train, this one much less crowded, that is scheduled to get in to Italy sooner. Unfortunately, Blackie, Curly and the Blonde follow them, trapping them in a single train compartment.

As the train barrels towards Italy, the two thugs, at the urging of the Blonde, begin to assault the girls in various ways. Curly, a heroin addict, forces Margaret to masturbate him. When they spot a peeping tom outside the train compartment, they force the man to rape her. Despite Blackie’s protestations, Curly attempts to rape Lisa but cannot penetrate her so, again with the urging of the Blonde, he uses his switchblade knife to deflower her. The Blonde forces him to thrust the knife deeper into Lisa, mortally wounding her. They spend the night watching Lisa slowly bleed to death, the knife still protruding from her vagina. Margaret attempts to escape, only to fall to her death from the train. They toss Lisa’s body and the young girl’s luggage out the window. Arriving at the station, they meet Lisa’s parents, Guilio, a surgeon, and his wife Laura. He offers to treat a cut on the Blonde’s leg, the result of a scuffle with Blackie, and takes them back to his home where he slowly pieces together, with the help of radio reports, the terrible fate that has befallen his daughter.


It’s often said that close quarters filmmaking is the most difficult filmmaking. The restriction of a closed space offers little in the way of choice when it comes to angles and compositions. To Lado’s credit, the entire mid-section of the film is incredibly engaging (even if the subject matter is remarkably grim). This section is littered with close-ups, tight compositions and an overall feeling of proximity to the characters. If claustrophobia was his intent, Lado really knocked it out of the park. You can almost feel the breath of the characters on your face. You feel helplessly trapped, like an animal in a cage. It is one of the most oppressive bits of film I’ve ever seen. Lado bathes these scenes in dark blues and imposing blacks, all the better to catch the white light reflected off the blade of a knife. This is pure nightmare stuff, the kind of filmmaking that makes you want to crawl right out of your skin. Unlike Craven’s film which is shot in the outdoors with a documentary-like feel to the direction, Lado’s film is calculated to an almost obsessive degree. I rarely feel as anxious as I did watching this film.

While the violence is fairly restrained for this kind of film, when it finally comes around, the effect is positively sickening. I can understand why this film was put on the DPP Video Nasty list. There are more than a few gut punch moments in here and I think that this film, along with LAST HOUSE ON THE LEFT, really captures the horror of rape better than most exploitation films. Unlike the Nikkatsu and Cat III films that used rape as a kind of pseudo-pornographic circus with charismatic, colorful rapists painted as anti-heroes, the treatment of rape in both NIGHT TRAIN MURDERS and LAST HOUSE ON THE LEFT is serious and without any erotic intent. There are no hyperbolic moments of shrieking, no pulsating soundtrack to underline the violation, no comfortable distancing between us the victims. In both films, the rapes are horrifically brutal and unflinching. The violence that comes afterwards simply doesn’t compare. Those easily triggered should stay far, far away.

But if voyeurism or shameless exploitation isn’t the point of this film, what is? Well, like LAST HOUSE ON THE LEFT, this is a movie concerned with violence. Not the act of violence. Not the spectacle of violence. The human component of violence, the barely closeted primate beast in all of us that is capable of atrocities and bloodshed. Craven’s ultimate point, that violence begets violence, is shared by NIGHT TRAIN MURDERS but Lado wants to push it a step further. During a fancy dinner at Guilio’s house, we see the surgeon discussing violence with one of his guests, a psychiatrist. They discuss the mauling of a young man by a dog. Guilio agrees that it was a terrible event but says that the boy should have known better than to be in the vicinity of an attack dog. They move on to a more generalized discussion. “Society has created violence and that means us”, the psychiatrist states. One of the guests, a blonde upper class woman responds shrilly, “how can you possibly blame us people for violence”. The psychiatrist responds simply, “because we are responsible”. Despite this conversation, Guilio simply disassociates himself from violence. He’s doesn’t want “an attack dog”. He isn’t “a violent person”.

This sort of attitude, a refusal to either accept blame or acknowledge consequences, runs straight through the film. Rape is considered “harmless fun” by Blackie and Curly. When Lisa dies, the Blonde washes her hands of the whole thing. “It wasn’t anybody’s fault. It was just one of those things”. It becomes swiftly apparent that Lado isn’t much concerned with Blackie, Curly or Guilio. His chief focus is on the Blonde, the grand orchestrator of the mayhem that leads to the rapes and murders as well as the inevitable violent comeuppance, and then casually, coolly deflects blame and escapes unharmed. She is the representation of a culture – gun culture, rape culture, etc. – that instigates, perpetrates, normalizes and trivializes violence and then reacts with equal parts staggering naivety and gross lack of awareness when called on it.
Posted by David Grant at 8:54:00 PM
Email ThisBlogThis!Share to TwitterShare to FacebookShare to Pinterest
Labels: 31 Days of Horror, Night Train Murders, Video Nasty