DON'T GO NEAR THE PARK 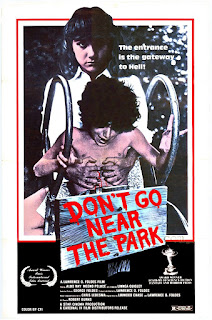 DON’T GO NEAR THE PARK?

How about DON’T GO NEAR THIS AWFUL MOVIE?

Seriously, this is ground zero of the exploitation genre. This is an abysmal, rotten, horrible excuse for a movie. The only way it could be worse is if you opened up the film reels and used the celluloid to strangle war orphans. I don’t have enough profanity in my vocabulary to accurately describe just how loathsome and irredeemably fucking terrible this piece of garbage is. If it were a person, I’d shoot it to death in my backyard.

How am I supposed to even review a film this bad? I doubt I could even give an accurate summation of the plot, if you can even call it a plot. The film feels like it was compiled from about 14 hours of raw footage. It’s so disjointed and incoherent it makes Naked Lunch look like Green Eggs & Ham. The movie begins by telling us that we’re looking at “12,000 years ago”. The only three white people in North America at the time are living in a cave. Brother Gar and sister Tra are scolded by their impossibly old mother (who’s wearing nail polish, by the way) and cursed to “perpetual death but never dying”, in other words “eternal life”. She then tells them a way out of this curse. I’ll let her explain it:


“You, my children, all things have a time. In 12,000 years, the stars will complete a revolution of the zodiac. The moon will once again be flanked by the twin stars of the wolf. On that night, find a virgin descended from the tribe and a mortal being whose soul can be sacrificed to eternal damnation in exchange for yours. Succeed and you shall achieve eternal life. Fail and be damned.”

I have to say, it’s awfully nice of her to curse her children AND tell them how to get out of it but… they already have eternal life. Why do they need it again? What they really mean is "eternal youth" because Gar and Tra have to spend the next 12,000 years eating people in order to stay youthful.

Well, the movie then cuts and tells us we’re now “16 years ago”, which anyone paying attention would assume means “16 years before 12,000 years ago”, but actually means “11,984 years later”. Gar, now going under the name of Mark, attacks a young boy and sloppily chows down on his intestines. That turns a 40-something Mark into a 30-something Mark, a startling difference in appearance, I must say. A little while later, his sister, now calling herself Patty, sucks blood off the chest of a dead nubile young lass and goes from Crypt Keeper to Bon-Ton cosmetics assistant. If there’s one thing this film has, it’s an abundance of willingness to say “fuck you” to its own internal logic.

Mark shacks up with Linnea Quigley, here playing a character so important they don’t even give her a name. Now that Mark has the mother of his child picked out, he marries her before knocking her up, proving that even superhuman, murderous assholes appreciate good Conservative family values. The film then jumps ahead 9 months to Quigley squirting out a kid, leaps ahead 8 years to Mark creepily spoiling his young daughter (who they named Bondi for some damn reason) and then jumps ahead AGAIN to Bondi’s 16th birthday party where her dad gives her a cheap pendant the size of a baby’s fist. At this point, I'm hoping the film will jump ahead 80 minutes to the closing fucking credits.

Though Bondi’s parents haven’t aged a day over the past 16 years, their relationship has certainly gone to shit. So Bondi packs her bags and runs away. It’s a good thing she remembered to take her magic pendant too, because (of course) she ends up in a rape van with a bunch of dickheads. But the pendant teleports her to safety and makes the van go BOOM! Bondi seeks shelter at a rundown shack that just so happens to be owned by Patty and falls asleep. She’s then woken up by a 10 year old boy named Nick trying to grab her breast. She stops him and he sheepishly asks for forgiveness by stating “I’m sorry, I didn’t know you were alive”.

I'M SORRY, I DIDN’T KNOW YOU WERE ALIVE

What kind of sick piece of shit is this kid?!

Anyway, Bondi hooks up with some douche they call Cowboy and creepy necrophile Nick starts hanging out with Aldo "would probably have sex with a dog for a paycheck" Ray. I must have blacked out for a good 20 minutes because the next thing I know, Mark and Patty were shooting lazer beams at each other while a cave inexplicably burned all around them. Bondi swallows her pendant, turning her into Sophia Petrillo from The Golden Girls. Zombies show up to eat Mark and Patty, Bondi changes back into her old midrift bearing self, Aldo Ray saves the day and I'm left with suicidal ideation for the next five hours. Viva la cinema! There is a bit of a surprise twist at the end, but as it has nothing to do with how much it's going to hurt when Bondi shits out that pendant, who cares?

Simply put, this movie is ass. Total, complete, grade Z ass. This isn't one of those "so bad it's good" kind of films. That would require some kind of earnest, genuine feeling to it. The reason PLAN 9 FROM OUTER SPACE is so entertaining is because we can feel Ed Wood Jr. behind the camera, trying to create something fun and entertaining. You can go on and on about how badly acted that film is or how cheap everything looks, but there is the sense that Wood was really trying. He wasn't "faking it", he wasn't out to create camp. We love to laugh at films like that because we can sense the genuineness of it. It isn't malicious or hurtful. It's like if your 8 year old kid spent time drawing a picture of their baby sister playing with an elephant and it turned out looking like caveman pornography. That's the difference between a film that is entertaining despite being awful and a movie that is trying to be entertaining by being awful. SyFy and The Asylum both fall into the latter camp and neither production entity has managed to get the same level of heart warming camp that films like PLAN 9 FROM OUTER SPACE deliver. They lack that rare confluence of earnest artistic endeavor and total failure at expression. You can't fake it. It's not something that can be made to happen.

But then there are films that are such total failures in every respect that they don't even need to be watched. They need to be euthanized. DON'T GO NEAR THE PARK is absolutely one of those films. I can safely say that this is, without a doubt, one of the worst films ever made.

Posted by David Grant at 7:59:00 PM
Email ThisBlogThis!Share to TwitterShare to FacebookShare to Pinterest
Labels: 31 Days of Horror, Don't Go Near the Park, Video Nasty