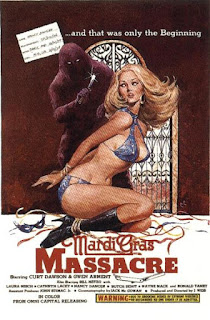 See that poster? That is the very definition of false advertising.

Our villain is a man named John who sounds like an Englishman playing an American doing an English accent. He spends a good chunk of time prowling around New Orleans looking for hookers. But not just any hookers, oh no, John wants the evilest hookers he can find. Seriously, that’s his requirement. When we first meet him picking up a lady of the night, he casually asks “who is the most eevull (yes, that is how he says the word) woman here?” I half expected, given the absolutely inane opening of the film, for the hooker on the right to say “well, Bonnie over there cheats on her taxes, but Wanda once stuck a fire hose up some kid’s ass and let it run until his colon burst”. Unfortunately, this film decides to try to play straight with its nonsense.

So after John procures his night’s entertainment, he takes her back to his sound proofed sex chamber complete with his own sacrificial altar and surround sound system that plays a mixed tape of generic 70s funk and sound effects from Flash Gordon. He then ties the willing victim down to the altar before rubbing her with massage oil and slicing open her breasts, hands and feet. He finishes the job by cutting a cow’s heart out of a rubber torso. Sound like fun? Well, it better because you will see this ritual nearly half a dozen times during this film. I mean, I get it. He’s a “ritual killer” performing “Aztec rituals” but come on now, Weis could have at least changed the camera angles from murder to murder. The only thing about these killing scenes that is even remotely laudable is the fact that the effects team actually thought to have the fake breasts on the torso match the real breasts of the actresses. So A+ for effort, I guess.

And because what’s a bad “psycho on the loose” movie without some stereotypical tough guy cops, we meet our two detectives, only one of which gets any kind of development. That would be Frank, described by a character in the movie as “a good cop but a bad human being”. Well, that’s half right. Despite there being a madman cutting the hearts out of hookers on the loose, Frank is much more interested in his new relationship with Sherry, this film’s Hooker with a Heart of Gold. They fuck and frolic like teenagers. They even have the most awkward public courting scene this side of Kay Parker’s romancing by her pudgy beau in TABOO. But of course the relationship falls apart (I would have thought a cop dating a hooker would be a punishable offense anyway) and Frank decides that maybe he should track down that pesky killer. Sherry takes it much better, stealing the scene at a local disco (and man, SPIDER-MAN 3 has nothing on this dance sequence) before – uh oh – finding herself in the company of John the Killer. Will our hero figure out his identity before Sherry dies? Do you care? I didn’t.

Oddly enough, this is the only time during the entire goddamn film where MARDI GRAS MASSACRE actually operates like a real goddamn film. You have a race against the clock, personal stakes on the table and a jukebox full of funk to get the old ticker pumping. But then you remember that Sherry is about as personable as a genital wart and Frank’s as much fun as cholera so who cares if one of them actually dies? Oh wait… I’d have to sit through that damn ritual scene again and as this time John plans on killing three girls in a row FASTER, FRANK! DETECT! DETECT! Thankfully, they stop in a Chinese restaurant and order a nice plate of Deus Ex Machina w/ Special Sauce and Frank is able to save the day. Except that the finale is pure sequel bait and the idea that there might one day be a MARDI GRAS MASSACRE 2 scares the piss out of me.

This movie hates women. There, I said it. Seriously, if being a prostitute constitutes “evil” (I’m sorry, “eevull”) then Donald Trump must be the goddamn end of all existence personified. There is a real sense of Christian Conservative values behind the scenes here, with a psychologist character writing everything off as Satanic, a cop that used to carry a Bible with him but is now porking a hooker, an angelic dancer that the killer wants to let go because he senses her goodness only to be told “nah, you paid me, I want to screw”… This film literally goes out of its way to reduce every woman in front of the camera to an opportunistic whore that deserves to be fucked or slapped around with nothing else in between.

I’d probably be more upset about that if this were a film worth getting upset over. This is just yet another movie that the DPP pushed into public consciousness with its inclusion on the Video Nasty list that would have otherwise faded away swiftly like a fart in a wind storm. Lacking the Saturday morning cartoon fun of BLOOD FEAST and any kind of Mardi Gras debauchery (this might as well have been called THE BUMBLEFUCK MIDDLE-OF-NOWHERE MASSACRE), this is just a depressing, dull and ultimately worthless piece of garbage that doesn’t deserve your attention. Unless you like disco, untrimmed pubic hair, stage blood and men who say eevull in which case, have a blast. Don't say I didn't warn you.