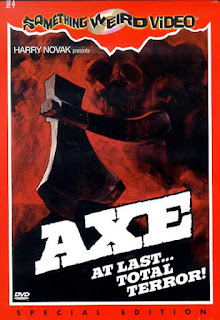 Three bruisers wait in a hotel room for their mark to arrive. One of the men, a cigar-chomping ball of pudge named Lomax rifles through a closet, finding a wig and a dress. “He’s a fairy”, Lomax remarks about their yet-to-arrive prey. As the more timid Billy keeps watch at the window, Lomax burns the dress with his cigar, annoying the ringleader of the group, Steele. When the man finally arrives with his date for the evening, Lomax and Steele shove a lit cigar into his mouth before beating him to death. His frightened lover jumps to his death from the ninth floor window.

This is the set-up for AXE, a Video Nasty undeserving of its Video Nasty status. I will admit that when Harry Novak’s Boxoffice International Pictures logo popped up before the opening credits, I expected something a tad bit more, shall we say, sleazy. Anyone familiar with the kind of film BIP distributed in the 70s will know what I mean. This was the company responsible for the US distribution of films like THE TOY BOX, THE MAD BUTCHER, COUNTRY CUZZINS and STREET OF A THOUSAND PLEASURES. You expect a certain kind of film from BIP, one filled with nudity, softcore sex and brutality. Odd then that Novak even decided to distribute Frederick Friedel’s little film. Compared to the other films in BIP’s catalog, AXE is remarkably restrained, even a little bit arty.

AXE, which was originally called LISA, LISA before Novak branded it with a more appropriate drive-in title (and then re-titled it again into THE CALIFORNIA AXE MASSACRE once Tobe Hooper’s THE TEXAS CHAINSAW MASSACRE was released), plays many of the same games that other exploitations movies of its kind do, from the physical violence of the opening, to the attempted rapes in the middle, to the bloody retributions of the third act, but it has this strange, almost surreal attitude. We’re never told who the gay man from the beginning was or why they killed him. We’re never told why Lisa lives alone with her grandfather or what Lisa’s obvious mental problems are. We’re never given any kind of exposition for anything really.

Of course, the film suggests quite a few things, particularly about Lisa. The grandfather reacts oddly to her touch. Her vacant stare and the ease with which she kills off our cast one by one suggests that this isn’t the first time she’s gotten rid of unwanted visitors. The ending scene even suggests maybe something a tad more supernatural, if not Satanic. There are no answers or reasons or motives to anything here. Just surface level representations left open for interpretation.

As a standard exploitation movie, AXE barely qualifies. The violence is far from graphic (hell, 90% of it happens off screen) while the rapes are unsuccessful and happen without any skin, male or female, being shown. But I don’t think Friedel was interested in making just another exploitation film. The surreal touches in AXE turn this otherwise brief but turgid tale into a kind of tone poem or a good murder ballad. There’s something about the editing, disjointed and sloppy at times, married with the gritty look and almost lackadaisical direction. When you pour on top of it the ethereal beauty of Leslie Lee as Lisa, with her angelic yet empty stare and her cold, calm demeanor, the entire film takes on this almost melancholic tone, like a softly hummed funeral dirge.  I don’t know how really to explain it, but AXE has a genuinely interesting feel to it, something I can’t quite articulate. At barely 70 minutes, I would recommend giving the film a watch for yourself, if only to see if you too can catch a beat or two from the song it’s singing.
Posted by David Grant at 7:31:00 PM
Email ThisBlogThis!Share to TwitterShare to FacebookShare to Pinterest
Labels: 31 Days of Horror, Axe, California Axe Massacre, Lisa Lisa, Video Nasty