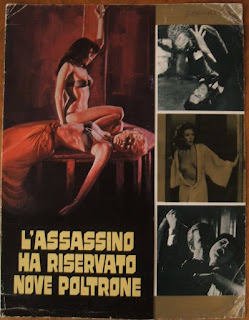 The golden era of the giallo film is often said to be the years between 1970 and 1975. I have to question the accuracy of that claim. The giallo is a literary film genre, born from the conventions and clichés of popular mystery writing, specifically the works of Edgar Wallace, Agatha Christie and Edgar Allan Poe. That’s always struck me as a bit strange. The giallo kicked off proper in the early 60s, decades after the works of Wallace, Christie and Poe were incorporated into popular culture, and well after their inventions and customs were recycled, reimagined and refined into the modern mystery thriller. The more customary mystery elements of early popular detective fiction are present unmolested in many of the early giallo films. Their only refinement, some might say augmentation, is that they were married to stylishly shot, purposefully playful and self-aware films. The giallo, as it were, was both classical and forward thinking simultaneously.

This clever use of the old through the new was a hallmark of the giallo film for a very long time. Hardly a giallo exists that does not, in some way large or small, harken back to well worn, well loved classic mystery writing. But as the years went on and the style-minded, popular giallo filmmakers moved on to the more comfortable waters of the police thriller and the Italian horror rip-off machine, the giallo became a stale graveyard of old ideas rendered impotent by the lack of visual imagination. The giallo started to die a suffocating death in 1973 when the glut of films released began to choke an already crowded market place. By 1974, it was on its death bed with hardly any films of note hitting the theaters. There was a last minute attempt at resuscitation in 1975 with AUTOPSY, THE KILLER MUST KILL AGAIN and the excellent DEEP RED among the releases, but for the most part, the gialli of 1975 were malformed and miscalculated catastrophes like EYEBALL and STRIP NUDE FOR YOUR KILLER, films that were so redundant and familiar that they often tumbled down the rabbit hole of unintentional self-parody.

Giuseppe Bennati’s 1974 film THE KILLER RESERVED NINE SEATS is emblematic of the problems with the giallo at the time. Like BAY OF BLOOD and FIVE DOLLS FOR AN AUGUST MOON, Bennati’s film uses Christie’s mega-popular, highly influential mystery thriller And Then There Were None as its inspiration. The mega-rich Patrick Davenant invites several acquaintances to stay with him at a family villa he inherited sometime in the past, primarily so they can check out the large, beautiful theater contained within. Among the guests are Patrick’s much-younger fiancée Kim, her ex-boyfriend Russell, his daughter Lynn, her lover Duncan, Patrick’s ex-wife Vivian, her companion Albert, Patrick’s sister Rebecca and her lesbian lover Doris. As you can tell, everyone in the cast of characters has some kind of tie to Patrick. Moreover, they are all, in one way or another, financially dependent on him and eager for him to shuffle off the mortal coil so they may have a chance at some of his money. Knowing full well that everyone would like him dead, it might seem a little strange that Patrick invited them all to join him. It becomes even stranger, once people end up dying, that Patrick didn’t give the trip a little more forethought. There just so happens to be a curse in place over the Davenant family, one that heralds the death of a group of people inside the villa every 100 years.

Given the familiarity of the set-up, one might assume that Bennati, along with his co-writers Paolo Levi and Biagio Proietti, would up their game, subverting audience expectations. Unfortunately, like many giallo films of 1974, they instead operate under a quota system. You know the system. We need X amount of breasts and X amount of dead bodies lying around. To be fair, films like TORSO (as well as nearly the entire slasher film sub-genre) also play by these rules, but with films like TORSO you at least have a substantive plot to go along with the breasts and bodies. Here, the entire plot gives way so that Bennati can supply us with essentials. I lost count of how many times characters wandered off to undress or screw, completely forgetting from one scene to the next that there is a killer running around. The majority of deaths in the film come after scenes of characters agreeing that they would be safe if they just stuck together. One edit later, someone walks down a hallway alone, at one point even chasing the killer into a room and then begging to be let in so they can talk to them face-to-face.

There’s also the business of an unknown man, referred to over and over again as “the man in the Nehru jacket”. This is a character who greeted them all when they arrived at the villa, even giving them an explanation for his presence (he’s a caretaker of the grounds). But time and time again, no one remembers who he is or why he’s there. Half the time, no one even bothers to think of him when talk of the killer’s identity comes up. When we finally get the real explanation behind his presence at the villa (and find out that the curse is true after all), it comes off as an insulting bow on top of an already messy, disorganized and ridiculous twist ending, a slap to the face to anyone actually thinking the film would play out in a semi-logical, semi-realistic fashion.

THE KILLER RESERVED NINE SEATS is a last gasp (or last grasp) of a film, a cheap and quick production meant to capture a meager audience still thirsty for the kind of film they routinely lapped up for the past four years. It has the elements of a giallo film (the mystery, the sometimes bloody violence, the red herrings, the goofy explanation for the murders) but it simply doesn’t have an ounce of life in it. This is a stale film, the kind that probably wouldn’t have been made before 1974, and while it has pieces worthy of praise (Carlo Savina’s score is wonderful and the creepy emptiness of Giuseppe Aquari’s cinematography sometimes creates a foreboding atmosphere), the film as a whole is lifeless and monotonous. Definitely a giallo to skip.
Posted by David Grant at 6:01:00 PM
Email ThisBlogThis!Share to TwitterShare to FacebookShare to Pinterest
Labels: 31 Days of Horror, Giallo, The Killer Reserved Nine Seats