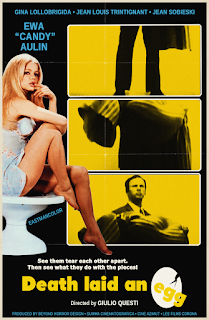 Giulio Questi’s 1968 art house giallo DEATH LAID AN EGG is a strange egg indeed. Here is a movie where the central metaphor for its underlying anti-capitalism message is a state of the art, automated chicken farm. Endless shots are devoted to dissecting the inner workings of this machine. Countless angles are devoted to showing the feed mills, perpetually grinding. Untold minutes are given over to shots of chickens, their heads sticking out between prison-like gratings, ceaselessly gulping down mouthfuls of feed that ironically both sustains them and pushes them closer to their destruction. An advertising executive puts forth a branding idea, producing capitalist propaganda posters reminiscent of those found during World War II that attaches human identities to these creatures, like a soldier or a businessman. The capitalist farming and destruction machine eventually produces what is determined to be the best of all possible mutations, creating chickens that have neither heads nor wings, rendering them unable to think or flee, all the better for easy capitulation, exploitation and slaughter.

This is a movie seemingly obsessed with the vacuity and meaninglessness of upper class life. At one point, a large group of wealthy do-nothings deconstruct a posh upper class room in a posh upper class house so they can lock themselves in two at a time. They fuck, fight and tell secrets behind that locked door, the implication being that the only way these people can actually be people is in secret. Our lead character engages in murder role play, taking hookers to a secret hotel room in a middle class part of town so he can gain some kind of control and satisfaction in ridding his life of his wealth-obsessed wife and the shallow vacuum of his existence, even though he knows that this is only a charade, that he cannot be apart from the system. In the ultimate irony of the film, our lead, the only character that shows any resistance to his role in this most empty of lives, ends up not apart from the system, but a part of the system, callously tossed headlong into the thing he resents, swallowed up and digested by the capitalist machine.

And while all of this is going on, there are the giallo elements dancing amid the Godard-like editing and post-modern constructions of its authors, Questi and Franco Arcalli. The giallo at play here is your typical wealth-obsessed, love triangle-born tale of sordid greed with Jean-Louis Trintignant falling for his wife’s lovely young secretary, here played by the fetching Ewa Aulin. His wife, played by Gina Lollobrigida, owns his stakes in the business. Getting rid of her would be getting rid of his guilt for feeding the machine. Together with Aulin, Trintignant plans on murdering her, only for his plans to fall through when it’s revealed that Aulin is having a love affair with Jean Sobieski’s advertising executive. Thinking that Trintignant is actually murdering prostitutes instead of just engaging in a bit of harmless role play, they launch a plot that involves planting a dead body at his secret hotel room meeting spot, only to have the whole thing come crashing down around them.

While it’s tempting to read the failure of their plans as a kind of “greed never triumphs” moral stand, the ending of the film is ambiguous at best. As the credits roll, just after a police man has devoured a raw egg, there is little doubt that their arrests haven’t solved anything. The only morally decent character has perished and the machine still churns on as if nothing could ever stop it. We have forever perverted the natural order by reducing lives down to dollars or dinners. This bitter view of modern life is reinforced throughout the film with even the editing delineating conversations into broken fragments of barely cohesive moments, constantly distracted and busy, as if time is money and can’t be spent focusing on any one thing for too long at a time because there’s dimes and nickels to be earned elsewhere.

DEATH LAID AN EGG is, at the end of the day, not so much a giallo as an art house film that uses the underlying concerns of the giallo (the effects of modernity and our ambivalence toward them, cynicism, greed, callous disregard for normality in favor of extravagance) and channels them into an aesthetic that both deftly illustrates those concerns while also subverting them. This might very well be one of the richest giallo films in terms of subtext, but on the surface level, it might be too much flash and style for many viewers. It certainly is a beguiling and often troubling film, frankly gorgeous to gaze at and endlessly fascinating in hindsight, but it’s also much ado about nothing if you just want to watch a comfortably engaging mystery thriller.
Posted by David Grant at 12:45:00 PM
Email ThisBlogThis!Share to TwitterShare to FacebookShare to Pinterest
Labels: 31 Days of Horror, Death Laid an Egg, Giallo