THE WEREWOLF AND THE YETI 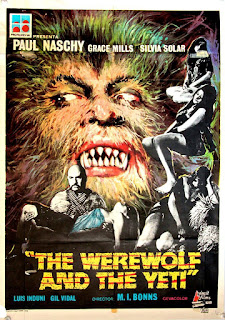 Well, this certainly is a movie.

To be honest, once I reached the point where Paul Naschy, dressed like a Roger Corman version of Blue Beetle, stumbled onto the set of PLANET OF THE VAMPIRES and was immediately confronted by a woman dressed like a Star Trek extra, I began to question my choice in entertainment for the day. I remembered my previous experiences with the Hombre Lobo series, a loosely connected Spanish werewolf franchise all starring Naschy as the Larry Talbot-meets-Indiana Jones character Waldemar Daninsky. Truth be told, I’m not a fan. They’re all rather dull, completely nonsensical, and full of bizarre mixtures of past classics and modern day trash. But this movie promised me a Yeti. Who am I to say no to that?

I’ll try to make sense of the plot here. Daninsky heads off to Tibet with an expedition crew. Their goal is to find solid evidence for the Yeti’s existence, because a stack of photographs and a fresh scalp, both of which they have, isn’t evidence enough. The expedition crew includes Daninsky, a professor named Lacombe, his hot young daughter Sylvia (who we know is the lead actress because virtually every character tries to rape her during the course of the film), some dude named Larry Talbot (because of course there would be a character named that), some doe-eyed broad named Melody, and a bunch of other people who don’t make it past the half way point. Once they arrive in Tibet, which looks like a rock quarry in Wisconsin, they begin to hear all kinds of tales about mountain demons. But as this is a horror movie (this is a horror movie, right?), Daninsky just ignores all that and heads off to scout a convenient path through the wilderness.

Well, he gets lost and stumbles across that PLANET OF THE VAMPIRES set I mentioned earlier, a cave in the middle of nowhere that belongs to two scantily clad women looking for a nice strong man. Because it’s in his contract that Naschy gets to pretend fuck anyone wearing a negligee, we get a little bit of sexy time before Daninsky realizes that these women are really vampires and witches and cannibals (OH MY!) and kills them both, but not before one of them bites him on the chest, turning him into a werewolf. I guess that’s just how that works in this universe.

So while Naschy is running around in beast mode, the rest of our expedition crew is captured by a bunch of bandits working for a big bad guy named, I shit you not, Khan. The only one that manages to escape is Sylvia and just before she gets raped, out pops Daninsky, still a werewolf despite the fact that it’s like three in the afternoon. He gets shot a few times in the process but saves the day, transforms back into normal pudgy Naschy and learns that he is apparently immune to having two bullets lodged in his gut. They seek shelter at a monastery and learn from the monk in charge that Daninsky can be cured by mixing a rare flower with the blood of a woman.

Long story short, Daninsky and Sylvia end up being captured by Khan’s men and taken back to his papier-mache palace, Daninsky gets to make out with a sorceress named Wandessa, Melody gets her back flayed as part of a cure for Khan’s terrible back pimples, Sylvia leads a revolt against her captors and Daninsky offs Khan. End of story.

Oh wait… there’s still that pesky Yeti. Daninsky goes full-on Teen Wolf, tangles with and kills the Yeti, but ends up dying in the process. But never mind that because WHADDYA KNOW?! there just happens to be that rare flower sitting right over there. Sylvia cuts her hand, force feeds poor dead Daninsky the cure and our intrepid adventurer walks off into the sunset?... sunrise?... I can’t tell what’s what with these goddamn day-for-night scenes… with his new jailbait girlfriend.

Look, this movie is bad. No two ways about it and while I can appreciate the outlandish nature of the whole thing, it’s just soooooo boring. How exactly do you make an adventure movie featuring a leaping werewolf, a spastic Yeti, vampire/witch/cannibal women, naked women being flayed alive, gun fights, bandits, fist fights and anal impalement this boring? Beats me but they sure as hell did it here. I think a lot of it comes down to the fact that Naschy has as much on screen charisma as Arch Hall Jr. and the entire film is just static shot after static shot. There’s so little going on that the problems stand out, like the way there is this constant blustery wind effect going on in the sound mix but not a single hair on anyone’s head moves a millimeter. Or the way the movie just decides to give everyone guns because it’s time for a gun fight. Or the way a metal gate is suddenly attached to the entrance of the cave so Naschy can’t just walk out (it just disappears after he kills the vampire/witch/cannibals). Or the way everyone knows everything because someone has to be able to explain all this nonsense to the audience. Or the way the film sticks to popular canon one minute, like Naschy’s slow frame dissolves into a werewolf a la THE WOLF MAN, and then says “hey, vampires transmit lycanthrope” the next. It’s just abysmal.

Posted by David Grant at 3:30:00 PM
Email ThisBlogThis!Share to TwitterShare to FacebookShare to Pinterest
Labels: 31 Days of Horror, Absolutely boring, Paul Naschy, The Night of the Howling Beast, The Werewolf and the Yeti