THE IGUANA WITH THE TONGUE OF FIRE 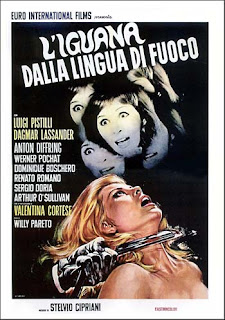 THE IGUANA WITH THE TONGUE OF FIRE is a 1971 giallo film so bad that director Riccardo Freda had his name removed from the film.

That’s pretty much all anyone really knows about the film. Forever lumped in with the more terrible gialli out there, Freda’s film has the reputation of being a low-logic, low-action thriller with a far too convoluted narrative. While I won’t bother to point out the irony of people complaining about any of those things in a genre practically built on them, I will say that I don’t think the film deserves to be dumped into the garbage bin of bad giallo films. It most certainly has a massive amount of flaws, probably more than I could list here, but it also has a charming kind of schizophrenia to it and a startlingly dark side that pops out when you expect it the least.

Set in Ireland of all places, THE IGUANA WITH THE TONGUE OF FIRE concerns Sobiesky, a Swiss Ambassador staying in Dublin with his wife (a bitter drunk and drug addict), his stepson Marc (who is distanced from the family but not their money) and his beautiful daughter Helen (a nightclub hopping, 70s chic party girl). A minor inconvenience occurs when the dead body of a woman is discovered in the trunk of their car. I say “minor inconvenience” because Sobiesky and his family have diplomatic immunity. This doesn’t quite faze the local cops though. They want to find out who committed the murder no matter what, even more so when Sobiesky’s mistress is found dead a few days later. The Inspector in charge contacts an ex-cop named Norton to figure out who is responsible for the killings. Retired after his rough-nosed police tactics caused a man in custody to blow his brains out, the Inspector thinks Norton is the kind of no-nonsense cop he needs, especially since he isn’t a cop at all, a nice workaround for all that pesky diplomatic immunity horesehit.

Norton immediately targets Helen, engaging in a tawdry sexual relationship with her. He questions Mandel, the chauffeur suffering from chronic conjunctivitis, a medical condition that requires him to wear sunglasses for most of the day, and even gains the trust of Sobiesky’s wife. Nothing gives. More worryingly, the killer has begun to target Norton’s family (the good Irish cop lives with his elderly, Agatha Christie-obsessed mother and his young, barely teenage daughter), even decapitating their cat and putting the body in the refrigerator. What an asshole. But with no motive, no eyewitnesses and no clues, how long will it be before the killer strikes again?

Well, let’s see what we have here. The plot, as you can tell, is rife with potential. Very few giallo films bother to go near the more popular conventions of the political thriller and sadly, THE IGUANA WITH THE TONGUE OF FIRE doesn't either. Despite nearly all the possible suspects being from the Sobiesky family, the idea of diplomatic immunity is really only used as a vehicle for Norton’s existence in the plot. We never find out why Sobiesky is in Ireland, what kind of connection the woman in the trunk had to any of the family members or even why any one of these people would commit murder in the first place. Once Norton enters the scene, it becomes his film and the more interesting avenues of exploration into the carefully guarded walls of the Sobiesky family are all but abandoned. Worse, this abandonment means that the mystery behind the narrative actually has to solve itself.

I’m not joking. If the killer never shows up at Norton’s home at the end of the film, the mystery never gets solved. Throughout the entire film, Norton makes no headway in the case. He is either denied information from Sobiesky or is presented with characters that are clearly incapable of being the killer. The closest thing the film has to a proper suspect is Mandel, but again, Mandel is quickly dismissed as a prime suspect for reasons that are never made clear and then ends up dying while on a phone call with Norton, during which he says “I know who the killer is but I will not tell you”. Have you ever seen a mystery film not cooperate with its main character? Seriously, this film gives Norton nothing to work with and consequently has to just give him the answer in the form of the killer who, in order for this to work, has to act completely out of character and target people whose existence in the narrative does not affect them at all. In fact, once we learn the reason why the murders have been taking place, the attack on Norton’s family becomes a mystery all its own. It simply doesn’t make sense. It’s just there because the film needs to end.

So this movie is bad, right? Strangely enough, no. No, it isn’t. I mean, it certainly isn’t well written and the bad dubbing sucks any potential from the performances (even though the film is set in Ireland, only Luigi Pistilli’s Norton is dubbed with an Irish accent, and a bad one at that; 99% of all the other characters are dubbed with English accents and Sobiesky’s wife is strangely dubbed with an almost Russian accent), but the tone of this film is so all over the place that it is endlessly watchable. We go from nicely photographed scenes of people talking to slasher film style scenes of people having acid tossed in their faces before their throats are slit wide open in Fulci-esque close-up, replete with Las Vegas fountain gluts of blood. A lovely scene of two people having a lover’s chat swiftly cuts to a flashback of Norton trying to stop a man from shooting himself in the head but failing. This scene, by the way, is repeated at least three times and only gets funnier with each repetition, with varying levels of brain matter hitting the wall and longer takes of Pistilli pretending to run in slow motion.

At one point Norton’s daughter chides her grandmother for not wearing her glasses, telling her that “you know you don’t hear well when you’re not wearing your glasses”. Norton enters a hotel and asks for Helen only to be told that she’s at the bar. Norton asks the clerk for a piece of paper and jots down a note, telling the clerk to give it to Helen, but then immediately walks off to find her in the bar, leaving us to wonder why the hell he wrote the note in the first place. Norton has a three minute scuffle with two men in a room so dark you can’t see anything, but you do get to enjoy the cacophonous pleasure of breaking furniture, shattering glass and comic book style WHAP! sounds. When Norton gets a gash on the back of his head sewn up by a doctor, we get to see the procedure (naturally) in queasy close-up, but then notice that the bandage has mysteriously moved to the back of his neck in the very next shot, presumably because Pistilli didn’t want to shave a patch of hair off his head. And while all the head shots, slit throats and softcore sex scenes are going on, there’s this limp dick mystery angle with characters all behaving strangely whenever Freda needs them to and constant violin screeches on the soundtrack whenever Mandel pulls out his sunglasses for the umpteenth goddamn time. The whole thing is a tonal and directorial mess, resolving itself in an absolutely brutal, borderline comedic, exploitation slice of heaven attack on Norton’s family with a killer just throttling the absolute shit out of an old woman, slamming her head repeatedly against a sink, while Norton’s barely-a-teen daughter stumbles around in the background topless. You just sit there thinking “what the fuck am I watching?”

Is THE IGUANA WITH THE TONGUE OF FIRE a bad film? Nope. Is it a good film? Nope. Is it entertaining, disturbing, over-the-top melodramatic and a total bucket of absurdity? You’re damn right it is and that’s why I always recommend the film to anyone who just wants to watch a stupid but effective piece of European exploitation. You won’t be intellectual stimulated. You won’t be knocked on your ass by intricate plotting and narrative ingenuity. You will however find yourself scratching your head and slapping your knee multiple times, probably at the same time, while grinning like an idiot because of all the weirdness on screen. Freda might have failed at delivering a tough, serious thriller, but he did manage to give us one hell of a weirdly entertaining flick.

Posted by David Grant at 7:17:00 PM
Email ThisBlogThis!Share to TwitterShare to FacebookShare to Pinterest
Labels: 31 Days of Horror, Giallo, Iguana with the Tongue of Fire