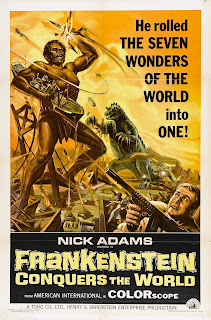 Toho’s massively successful KING KONG VS GODZILLA began its life as a new Frankenstein property, only to have the horror icon replaced during pre-production in a self-serving (and ultimately rewarding) move by producer Tomoyuki Tanaka. The decision making process was driven by simple economics and opportunity. Toho acquired the rights to the giant ape and knew the idea of King Kong, the American Kaiju, clashing with Godzilla would immediately have cross culture appeal. But the idea of utilizing the Frankenstein’s Monster (who was already in the public domain) never left Tanaka’s mind. Numerous Frankenstein projects would come and go since KING KONG VS GODZILLA was released, but all would suffer the same fate, left to rot in development hell or canceled outright. The two projects closest to seeing the light of day were FRANKENSTEIN VS THE HUMAN VAPOR, a sequel to an underperforming film from 1960 called THE HUMAN VAPOR, and GODZILLA VS FRANKENSTEIN, a Kaiju clash that would ultimately be shelved so Toho could pour their resources into GODZILLA VS MOTHRA and GHIDORAH, THE THREE HEADED MONSTER.

By the time a Frankenstein project was green lit by Toho, the year was 1965, well into the new Kaiju cycle. An American-Japanese co-production, the resulting film, FRANKENSTEIN CONQUERS THE WORLD, was a bit of an oddity when it was released with a Frankenstein’s Monster unlike any the world had seen to date. This was a bit disappointing to purists who were hoping for something a bit more recognizable, but for Japanese audiences (and surprisingly enough, when AIP released the film in the States, for American audiences as well) the film was good enough to earn solid bank at the box office, even getting a sequel in 1966 called THE WAR OF THE GARGANTUAS. The film is clearly more like the 1952 American sci-fi classic 20 MILLION MILES TO EARTH than it is like any variation of Mary Shelley’s classic creation, but that alone isn’t what sinks FRANKENSTEIN CONQUERS THE WORLD for me.

The film begins, strangely enough, in Nazi Germany where a mad scientist named Riesendorf is conducting experiments on a disembodied beating heart, the only remains of the original (so we assume) Frankenstein’s Monster. Halted in his work by SS soldiers, the heart is transported out to sea where it is handed off to Japanese researchers for transport to Hiroshima. As the Japanese researchers begin their testing, the American military drops the atomic bomb, destroying the city and the research facility. 15 years later, the mysterious heart has entered the realm of urban legend. We meet our heroes, an American scientist named James Bowen and his assistants, Sueko (his love interest) and Kawaji. After spotting a feral youth, Bowen and Sueko manage to capture the boy, taking him into their hospital, a radiation care center. They discover several anomalies, like the boy’s immunity to radiation and more bizarrely, his rapid growth.

While all this is going on, an oil factory in Akita is destroyed by a sudden, violent earthquake. An oil worker (ironically the same person who delivered the beating heart to Japan 15 years ago), sees a strange glow emanating from the pit in the ground. Back in Hiroshima, the boy has quickly grown into a giant and must be kept chained up in a large cell. Though not showing signs of aggression, the quickly growing man has a constant, near obsessive desire to consume large amounts of protein. When Bowen is visited by the oil worker, the man confirms the truth behind the legend of the beating heart, prompting Bowen to visit Riesendorf in Germany. The aged mad scientist tells him that the only way to confirm that the man in their possession is a newly formed Frankenstein’s Monster (annoyingly enough, through the course of the film, the man is referred to as either THE Frankenstein or A Frankenstein so I’ll drop the Monster part and follow suit) would be to sever one of his limbs. As the Frankenstein can spontaneously re-grow damaged limbs and tissue (hence the Nazi experimentation; they wanted to create super-soldiers), Bowen and his team would know for sure that what they had in that cell was a Frankenstein. Fortunately (or unfortunately), they never have to. Enraged by the flashing lights of a TV crew invited to the facility, the annoyed beast severs its own hand trying to shake free of its shackle. The Frankenstein escapes the lab, leaving behind a still-moving hand, before spending an untold number of days eating livestock all over the countryside, growing in size as it tries to reach the colder climates of the mountains.

The military (of course) wants to destroy the Frankenstein, claiming it killed dozens of people in various attacks. But that isn’t true. The blame for that falls on the scaly haunches of Baragon (not to be confused with Barugon, a monster from the popular GAMERA series released by Daiei), a four legged bioluminescent monstrosity capable of digging through the earth. Despite their pleas, our heroes cannot stall the military advance. Thankfully, the Frankenstein is spared from military destruction when it squares off against Baragon amid a massive forest fire, saving dozens of lives in the process. But depending on which ending you see, the Frankenstein, along with Baragon, gets swallowed up by a massive cave in or, in the Japanese ending, gets dragged into the ocean and drowned by a giant octopus after defeating Baragon.

So what exactly are my problems with FRANKENSTEIN CONQUERS THE WORLD? Well, for starters the movie has major pacing issues. Nearly 40 minutes of the running time is given over to our heroes trying to locate the monster but failing, trying to get the press to cover the story but failing, trying to convince the military that the Frankenstein is peaceful but failing… And that last bit doesn’t matter at all as the military might be all gung-ho to kill the Frankenstein but are virtually invisible in the proceedings. I was actually surprised when they turned up during the final 15 minutes of the film. I had forgotten all about their “we’re gonna kill it come hell or high water” theatrics at the end of the first act. There are a few Baragon encounters to break up the monotony but not enough to lift the film out its mid-section lull.

The second thing that bothers me is the Frankenstein. Simply put, it doesn’t inspire awe or fear. It looks, more or less, like your stereotypical cave man with its large forehead and gnarly teeth. It even fashions itself a loin cloth made from animal pelts. The film might as well have been called ATTACK OF THE 50 FOOT EEGAH. You think back to all the various representations of the Frankenstein’s Monster, from the ghoulish box top design of Karloff to the nasty patchwork quilt of human bits and pieces from Hammer’s THE CURSE OF FRANKENSTEIN. To put it bluntly, had Toho not called this film FRANKENSTEIN CONQUERS THE WORLD, you would think you were watching a Kaiju remake of Bert I. Gordon’s THE AMAZING COLOSSAL MAN. Toho desperately wanted to make a Japanese Frankenstein Kaiju movie and THIS was the best they could come up with?

But I would be remiss if I didn’t own up to the fact that the last 20 minutes of the film were really good fun. Some of the visual kitsch and camp is missing due to the fact that we’re just watching some guy with false teeth and a phony forehead smacking around a giant lizard instead of watching another giant lizard smacking around a giant lizard, but the effort that went into making the climax of FRANKENSTEIN CONQUERS THE WORLD is evident. With the burning forest behind them, the Frankenstein and Baragon go at it with an amazing amount of fury. Baragon leaps through the air, whips its tail back and forth, and flees into the ground only to burst forth with renewed vigor. The Frankenstein tosses rocks, pulls trees from the ground and even lights a few on fire to use as flaming melee weapons. It’s great stuff for sure, but does it make up for the absolutely wooden second act? Not quite, but for those 20 minutes you might not care about anything else other than the epic Toho smack down unfolding right in front of your eyes. It's a good one, that's for sure. I just wish the previous 110 minutes were as good as the final 20 minutes.


If you want more information on how a Frankenstein versus King Kong flick eventually became a Godzilla film, I briefly cover it HERE.

Posted by David Grant at 7:27:00 PM
Email ThisBlogThis!Share to TwitterShare to FacebookShare to Pinterest
Labels: 31 Days of Horror, Frankenstein Conquers the World, Frankenstein vs Baragon