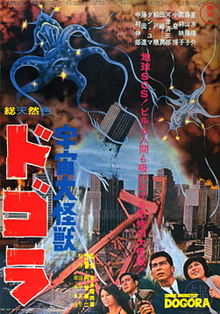 1964 was a busy year for both Toho and director Ishiro Honda. The Godzilla franchise had seen two major releases, GODZILLA VS MOTHRA and GHIDORAH, THE THREE-HEADED MONSTER, both massively popular with audiences. Sandwiched between the those two big releases was DOGORA, THE SPACE MONSTER, a rollicking Kaiju-crime thriller mash-up that would in many ways lead the charge for later Godzilla franchise entries. This is a film neatly bisected into two distinct pieces. The first details a police squad’s attempts to thwart and capture a band of diamond thieves. The second details the arrival of and destruction caused by a Lovecraftian space jellyfish monster called Dogora. Like many of the later Godzilla franchises with their dual narratives of human action and monster action, these two narrative pieces feel like separate stories, only made to fit together to suit the need for a new monster movie narrative (for example, the scheming aliens from the Third Planet from the Black Hole could have been building any old weapon of mass destruction, but because we’re watching a film that takes place in the Godzilla universe, the aliens are not constructing death rays or Death Stars, they’re creating MechaGodzilla).

This two-sided approach can be either a blessing or a curse. As much as we all love watching rubber suit monsters smack each other around, some other strand of narrative is needed in order to make these films work. Simply put, an hour and a half of monster mashing would get old pretty quick. The human stories added to these films generally kept to the science-fiction/fantasy feel of the Godzilla universe, usually positing alien invaders as the main threat. To make these two strands fit together, the most common narrative device employed was mind control. Whether it was Rodan or Ghidorah, a massive beast would be unleashed upon the Earth with only Godzilla standing in the way. As Godzilla kept the monster at bay, our human heroes would have to infiltrate the alien base to destroy the mind control system. This works to kill the eventual boredom of a 90 minute fight scene while also keeping the budget under control.

Some of the films did this well. Both GODZILLA VS MECHAGODZILLA and its sequel TERROR OF MECHAGODZILLA balance their kitsch sci-fi storylines with the monster action brilliantly thanks to engaging characters, interesting locales and quietly subversive tones. On the other hand, films like GODZILLA VS MEGALON and GODZILLA’S REVENGE give us empty and downright insulting human dramas that make us ache for more monster action. It’s a balancing act that if done well can elevate the film as a whole. If done poorly, no amount of monster action can make up for it. What Toho was asking of these screenwriters was to essentially write one film while making it able to sustain another. That isn’t an easy task. Too much disconnect between the pieces, you end up with GODZILLA RAIDS AGAIN, a movie which is about the loss of livelihood rather than the loss of life. Swing too hard in one direction and you might end up with something more like ATRAGON (the central narrative of this film was basically reused in GODZILLA VS MEGALON), a movie which feels like a Kaiju movie bolted on to a completely different film (which is exactly what it was). It’s all about balance, having the one fit the other in terms of internal logic and consistency, not just setting and iconography.

So what the hell to make of DOGORA, THE SPACE MONSTER? Here we have a film where the monster, a space creature terrorizing Japan by eating diamonds, is basically a hyperbolic exaggeration of our human villains, a gang of Yakuza like thugs carrying out diamond heists. That really is the extent of the connection between the two halves of the story. What keeps DOGORA, THE SPACE MONSTER from completely collapsing upon itself is that both stories are incredibly well done. In fact, this seems to be the film GODZILLA’S REVENGE wanted to be with its parallel stories of a bullied, kidnapped child and Minilla’s attempts to thwart the evil Gabara. It might not be bulletproof screenwriting (it sure isn’t subtle) but the dual actions of diamond stealing criminals vs. stalwart police force and diamond eating monster vs. brave military forces makes for a varied, interesting (if a bit dumb) movie going experience. It’s like the screenwriters wrote two versions of the film, one a human version and the other featuring Kaiju critters and then just decided to mix them up instead of re-writing one or the other.

The cops and robbers side of the story is like a Saturday morning noir with its sunglass wearing bad guys (complete with their own foxy, duplicitous moll, here played by the ever-stunning Akiko Wakabayashi) gunning toe-for-toe against the incorruptible Inspector Kommei, here aided by an American named Mark Jackson who may or may not have a criminal history all of his own. Their side of the story features multiple double and triple crosses, robberies at gunpoint and even some good old chopsocky action. To give you a good idea of the tone of this narrative side of the film, the big center piece suspense scene features our heroes, Jackson and Kommei, tied up inside a room, frantically trying to get free before the dynamite the diamond thieves stuck in their shirt pockets goes BOOM.

Meanwhile, you have Dogora, the space jellyfish that materializes from time to time to suck up diamonds and coal, two tasty sources of carbon, the only thing the beast feeds on. The only Kaiju to not be portrayed by a man in a suit, Dogora is a fascinating monster to behold. Its arrival usually heralded by a large scale atmospheric disturbance (really just colored paints dropped into a fish tank than flipped upside down during editing), Dogora is a different kind of monster than Toho was producing, something much more alien and creepy than yet another dinosaur-like Kaiju creation. The military, as always the case, begins shelling the creature, but all this does is force Dogora into mitosis, resulting in dozens of mini-carbon vacuums roaming the skies. The only breakthrough comes when Dogora disrupts a large hive mass in a mine, the wasps flying up to sting the beast in defense. The wasp venom causes Dogora to crystallize, chunks of its body falling to Earth. The military immediately calls for a large supply of synthetic wasp venom. This is the only moment when the two stories become intertwined in any meaningful way. As our band of police heroes engage in a long shootout with the crooks on a beach, huge chunks of crystallized monster fall all around them.

Needless to say, this is ridiculous stuff, but man oh man, what a great little film. Like ATRAGON, DOGORA, THE SPACE MONSTER succeeds through strength of character and sheer force of energy. This is a kinetic film brimming with likeable, charismatic performances and some genuinely exciting set pieces. It has the cheerful tone of a Dick Tracy story but married with the awe inspiring, otherworldly visuals of a George Pal production. The disparate elements of science fiction and crime thriller never quite fit, but they never were really intended to anyway. As I mentioned before, you’re basically watching the same concept (jewel thieves versus law enforcement) play out through two different genre spectrums, only meeting during the finale for a laugh. This film was intended as the starting point for an entire series of films featuring the character of Mark Jackson. Those films never happened as Toho producer Tomoyuki Tanaka began throwing all his muscle behind more standard Kajiu fare. That is an absolute shame as DOGORA, THE SPACE MONSTER was one hell of a launch pad for a franchise. Had the following films kept the manic, charming tone and presentation of the original, who knows what the current conversation about Toho genre fare would look like?
Posted by David Grant at 11:16:00 PM
Email ThisBlogThis!Share to TwitterShare to FacebookShare to Pinterest
Labels: 31 Days of Horror, Dogora The Space Monster