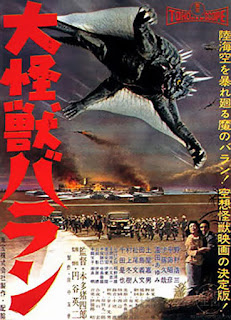 Despite being largely considered one of the worst Toho monster films, VARAN THE UNBELIEVABLE has a very interesting, convoluted history. What began as a Japanese-American co-production planned for American television soon became a potential money pit for Toho when the American producers pulled out, leaving the Japanese giant to foot the bill on a nearly completed film. Undeterred (or desperate), Toho decided to push on with the production, removing any trace of American involvement and filming new scenes to fill in the gaps. As the film was planned for Academy ratio television presentation, Toho began to convert the footage into the cinema friendly widescreen ratio while GOJIRA composer Akira Ifukube rushed through a new score that would borrow heavily from his already existing Kaiju movie material. Released to theaters in 1958, audience acceptance for the now completed film was lukewarm. The nasty side effect of being produced for television was that VARAN THE UNBELIEVABLE was a black and white film. Alongside the obvious padding and overuse of stock footage, the degraded visuals put off most cinemagoers.

But is VARAN THE UNBELIEVABLE really one of the worst Toho monster films? Short answer: kinda. Long answer: I’ll get to that in a minute or two.

It becomes obvious soon after the 30 minute mark that the story here was reconstructed from something much larger. In a little village near the Kitakami River, two entomologists on the lookout for a rare species of butterfly are killed by an unseen beast. Funded by a Japanese film production company, a much larger group is sent out to investigate. This includes Horiguchi, a reporter, and Yuriko, the sister of one of the dead entomologists. They discover a small village full of superstitious natives who worship a river god named Baradagi. Although warned that their presence might upset Baradagi, the reporters trudge on. Soon enough, the monster, soon to be named Varan as it is apparently a member of a thought-to-be-extinct dinosaur species called Varanopode, rises from the waters and destroys the village.

After the military arrive on the scene, they begin an all-out assault on the creature, first poisoning the lake to wake it up then blasting it with an endless barrage of missiles and machine gun fire. Naturally, all this does is anger the beast. When Varan traps Yuriko and Horiguchi in a cave, the military uses flares to lure it away. Then Varan spreads wings and flies off. Fearing the monster will arrive in Tokyo, the military begins their preparations, finally facing off against Varan when it comes ashore.

The first big problem with the film is Varan itself. Simply put, Varan appears to be little more than a reconstruction of an Anguirus suit with a more Godzilla-like head placed on it. Even Varan’s roar seems to be a variation of Godzilla’s shrieking vocalizations. I’m not one to harp on logical or anatomical inconsistencies or improbabilities when it comes to Kaiju monsters, but Varan is known as “the unbelievable” for a damn good reason. Varan goes from crawling to standing whenever the scene calls for it. His “wings” are not really wings at all, more like the patagium of a sugar glider meant to ease and direct its descent from high places. How Varan suddenly manages to take flight is beyond me (and beyond physics).

The other big problem is the abundance of stock footage used in the film. As the film was missing most of the original narrative, the producers decided to make this into more of a military preparedness film. As such, there are endless scenes of planes flying through the air (sometimes just the exact same scene repeated four or five times in a loop), ships resting in the ocean and empty sequences of military types discussing strategies. This simply does not make for an exciting film. The vast majority of this footage (aside from the planning scenes) is just stock footage, easily ten years older than the film we’re watching, and it is always jarring when we go from a nice looking, reasonably well shot film scene to yet another grainy, degraded shot of military propaganda, some of which is not Japanese in origin.

Yet another problem is the familiarity of it all. Several plot points from GODZILLA RAIDS AGAIN are used here, the most notable being the “distraction by flares” scenes. Even Akihiko Hirata, Dr. Serizawa from the original GOJIRA, shows up here, again playing a pivotal role as the scientist whose new creation can kill the beast once and for all. Several scenes of destruction are reused footage from both GOJIRA and GODZILLA RAIDS AGAIN. When you combine all these borrowed elements and mix them up with familiar cast faces, and a score that sounds awfully like remixed tracks from GOJIRA, RODAN and GODZILLA RAIDS AGAIN, you end up with a film that feels like something you’ve already seen. What is missing the most in VARAN THE UNBELIEVABLE is a feeling of originality.

But that isn’t to say that VARAN THE UNBELIEVABLE doesn’t have some great moments. All the material taking place near the Kitakami River village is great. Most often, Japanese Kaiju movies take place in major cities so it’s nice to see a KING KONG like setting. With its black and white cinematography and steady Ishiro Honda direction, the first half of the movie is striking, almost creepy stuff. But like KING KONG, we eventually have to leave the island confines and return to the traditional, tired cityscapes and that’s where VARAN THE UNBELIEVABLE really becomes bland and repetitive. That’s really quite a shame too, as the first 45 minutes or so of the film really do transcend its rushed, almost disastrous origins.

Ironically enough for a film once planned for American distribution, Crown International Pictures released an edit of VARAN THE UNBELIEVABLE in 1962 that dramatically altered the film. Almost all of the non-special effects shots from the Japanese film were replaced with new material starring American and Japanese-American actors. The film was re-scored and all but rewritten during filming with the entomologists being replaced by American scientists working to desalinate Varan’s resting spot. All scenes of Varan flying were removed, his appearance in the lake moved to later in the running time and his name, oddly enough, is never spoken once during the film.

This American edit of VARAN THE UNBELIEVABLE was for a long time the only available edit of the film in America. Much like GODZILLA, KING OF THE MONSTERS, this American edit is so radically different that they might as well be considered remakes rather than re-edits, but honestly, while the American version of GOJIRA is far inferior to the Japanese original, the American re-edit of VARAN THE UNBELIEVABLE is slightly better. It moves along much quicker, contains much more story and gives us actual lead characters, something Yuriko and Horiguchi are not, despite their prevalence in the proceedings. The American edit might not be as gloomy and effective as the Japanese version is at times, but if you just want to catch a glimpse of Varan in all his absurd glory, that would be – and believe me, this is the only time I will EVER say this about ANY American edit of a Toho Kaiju film – the version to watch.
Posted by David Grant at 4:03:00 PM
Email ThisBlogThis!Share to TwitterShare to FacebookShare to Pinterest
Labels: 31 Days of Horror, Kaiju, Varan the Unbelievable