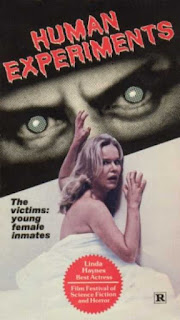 I’m sick as a dog and pumped full of cold medication so clearly today was the right day to watch HUMAN EXPERIMENTS. The slight delirium of the fever meant the pain would be dulled. If the cold medication knocked me out, it meant I had a valid reason for not getting this review out on time. Win-Win. Alas, I made it through the whole thing, my second viewing in the decade since I bought it on a cheap bootleg DVD at some convention. There’s a reason I haven’t watched it more than once and it has nothing to do with any kind of nasty material this Video Nasty contains… because it doesn’t contain any. Seriously, this women-in-prison flick from 1979 could have easily been a Lifetime original movie called Clockwork Orange is the New Mehhhhhhh.

Here we have a country music singer (a terrible one at that) named Rachel. She’s a pretty young blonde playing random dives around the country. Her recent performance was a hit, so much so that Aldo Ray offers to jump her bones. When she refuses his oh-so-generous offer, he stiffs her on her performance fee. Seeing as his brother is the Sheriff, Rachel has no other choice but to suck it up (figuratively) and leave. On her way out of town, she nearly runs someone over. Stopping to check on the person in the road, she comes across a home. Inside she finds three or four dead bodies and a young man with a gun. She shoots him (he remains in a coma for the rest of the film only to conveniently awaken in time to give the movie a stale ironic twist) and tries to escape, only to get arrested. Because no one can believe that a nice young man could murder his family, Rachel is found guilty of first degree murder and sent off to the Gates Correctional Facility where she captures the attention of prison psychologist (and amateur bug collector) Dr. Kline.

Turns out good Dr. Kline is a bit of a nutjob. With the permission of the prison warden Ms. Weber, Kline runs behavioral modification experiments, basically driving a subject to complete insanity. Once broken, the subject becomes like a child that can reared within the system, completely shaped and rehabilitated into a proper young woman. The effectiveness of this is… well, let’s just say that Dr. Kline doesn’t many successes under his belt. His previous patient, Rita, wouldn’t stop throwing mashed potatoes at him so he strung her up by her neck, killing her, passing it off as a suicide. This doesn’t sit well with the warden, but as Dr. Kline has a whole lot of dirt that could bury both their reputations, he gets his way. He also gets a new test subject, our wrongfully imprisoned country singing, shotgun shootin’ Rachel.

Let’s get this out of the way right now. This movie has no business being on the Video Nasty list. There is so little violence and so little sleaze and depravity that it could easily be cut by about four seconds (for nudity purposes) and played in elementary schools. There is a bit of a well done freak-out sequence near the end when Rachel finally enters the final phase of Dr. Kline’s experiment, but overall this movie is just one long nothing. All the usual softcore hijinks, fumbling lesbian sex, brutal fisticuffs and overall sleaziness of the women-in-prison film is missing here. It’s like co-writer/director Gregory Goodell wanted to make a SHOCK CORRIDOR and A CLOCKWORK ORANGE mash-up (with touches of THE MANCHURIAN CANDIDATE) but just couldn’t figure out how to do it. All that’s here is an endless, utterly depressing cycle of cheap melodrama that goes absolutely nowhere. I’m not kidding. This is one of the most overwrought and completely meaningless wastes of time I’ve ever sat through.

And that’s a damn shame too as the cast is littered with familiar faces that perform the fourth-rate material rather well. Linda Haynes, Ellen Travolta, Mercedes Shirley and the always great Lurene Tuttle are in this damn movie. The late, great Geoffrey Lewis, a man that could elevate even the most horrible dreck, plays the role of the maniacal Dr. Kline. This is a great cast, well better than this movie deserves, and I think that is the single greatest crime HUMAN EXPERIMENTS perpetrates. It wastes a huge amount of talent. I mean, I can forgive it wasting my time. But wasting my time while taunting me with the possibility of a much better movie? That I cannot forgive.
Posted by David Grant at 9:51:00 PM
Email ThisBlogThis!Share to TwitterShare to FacebookShare to Pinterest
Labels: 31 Days of Horror, Human Experiments, Video Nasty