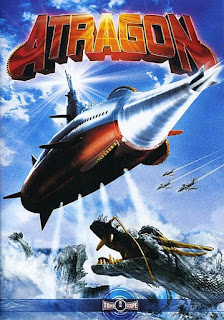 While MOTHRA was a big success in 1961, it was really KING KONG VS GODZILLA in 1962 that got the decade off to a roaring start for Toho. Their most successful Kaiju epic to date, the success of Ishiro Honda’s monster classic all but validated the tokusatsu film overnight. Toho’s next reasonably well budgeted science fiction adventure film would mine many of the same sensibilities that KING KONG VS GODZILLA brought to the big screen although without the spectacle of battling beasts. Here that sense of adventure, wild fantasy locales and gorgeous displays of large scale destruction were married to the lighthearted escapism of young adult adventure books. Taking inspiration from Jules Verne, a series of adventure novellas written by Shunro Oshikawa and the fantasy cinema of 1950s America, ATRAGON would be unveiled to the eager Japanese public in 1963.

While ATRAGON did not see the same level of audience interest and moviegoer support as Godzilla’s triumphant return, the film performed well enough to be considered a success. I can imagine the audience for this film feeling a bit disappointed by the multi-layered, crowded and sometimes preachy tone of ATRAGON. Tokusatsu films had apparently left that all behind after MOTHRA, but here was a film very much about Japan’s wounded ego after World War II and along with it, a not-so-subtle lesson in the dangers of extremist nationalism. ATRAGON is still very much a flight of fancy, a youthful adventure about a conflict between the Japanese military forces and the once-thought-lost continent of Mu, now thriving deep beneath the ocean, but its juvenile narrative full of flying submarines, sea serpents and freeze rays also packs potent dramatic and philosophical elements (like the meaning of patriotism, the folly of war and the destructiveness of pride) that transcend the usual science fiction trappings and help turn ATRAGON into a strange, almost melancholic anti-war parable.

Now you would think that the more grown-up elements of the narrative would clash with the by-now standard B movie jargon in the story. This is after all a movie about an undersea civilization capable of building massive geothermal power plants, anti-compression suits that can withstand the pressures of the deep ocean and captain a submarine capable of destroying warships with a single laser blast, but still walk around in tribal robes poking at intruders with spears. But those grown-up elements never really intrude into the story. There is no grand standing here or overblown monologues. Its subtext remains subtextual and Honda, working here with many returning cast and crew members from GORATH, never lets it get in the way of his simple, rousing adventure tale.

And what an adventure tale it is. There is a genuine spirit of fun and excitement buzzing through this film. Like GORATH, this is not a Kaiju film. Atragon is not the name of a monster but rather the name of a drill mounted flying submarine, a device created by a thought-to-be-deceased Japanese military captain named Jinguji, living in self exile since the end of World War II. Though Jinguji only cares about restoring the honor of the Japanese Empire, he eventually is brought back into action once the Empire of Mu surfaces, devastating the Japanese homeland and threatening the world with destruction. With his estranged daughter (who he abandoned decades ago when he went to war) and her photographer friend captured by the Mu army, Jinguji must use Atragon to both breach and destroy the underwater Mu base, but first he must tangle with Manda, a sea serpent monster under the control of the Mu.

The best elements of 1950s science fiction are here. The stalwart heroes, the beautiful damsels, the comic book villains, the extraordinary (and impossible) contraptions, the race against time, the monsters, the mayhem… all of it is alive and well in ATRAGON, and pulled off with such ease and professionalism that you hardly notice the minutes flying by. Toho really shined brightest during the first half of the 1960s, producing a new classic tokusatsu film every year for five straight years. ATRAGON would be largely forgotten by all but the sci-fi faithful, a casualty to the ever escalating (and then quickly diminishing) success of the GODZILLA franchise. It honestly deserves a better fate. It’s a real gem of sci-fi fantasy adventure that really captures the wonders of what escapist adventure can be if done well.

Posted by David Grant at 11:06:00 PM
Email ThisBlogThis!Share to TwitterShare to FacebookShare to Pinterest
Labels: 31 Days of Horror, Atragon