A TASTE OF BLOOD 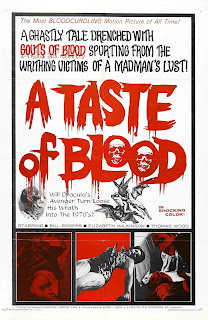 “John, I can see that flower pot in the mirror, but I can’t see you!”

That little exchange of dialogue between two friends, one of whom just so happens to be a vampire, sums up the tone of A TASTE OF BLOOD rather well. At damn near two hours, this 1967 love letter to campy Hammer horror is Herschell Gordon Lewis’ magnum opus, a sprawling (read: contains more than five locations) tale of vengeance from beyond the grave.

A Florida businessman named John Stone receives a box in the mail, a strange package from overseas containing two bottles of aged brandy and a letter notifying him that he has inherited an estate in London. As the inheritance has a bit of a waiting period attached to it, John continues with his day to day, slowly draining the two bottles of brandy. Unbeknownst to John, the brandy has been laced with blood. Not just any blood, oh no, but the blood of Dracula, John’s ancient ancestor.

John’s changes in behavior (for example, he only sleeps during the day and the sight of crosses make him wince) worry his adoring wife, Helene. She turns to John’s friend, the good doctor Hank, for help. As Hank is still madly in love with Helene, he agrees to speak with John. But before Hank can get to the bottom of all this, John skips out, traveling to England. Why, you ask? Well, that’s where the distant relatives of Dracula’s mortal enemies live, of course, and John, now full-on vampire, has a bone to pick with them.

If A TASTE OF BLOOD sounds like a great deal of fun, it’s because it mostly is, emphasis on mostly. The biggest problem is the pacing of the film. It is, to put it nicely, awfully leisurely. Lewis considered A TASTE OF BLOOD to be his best film and you can tell that the director was in love with every single moment of it. There’s so much fat to be trimmed off here, so many moments that go on well past their purpose. Had all the excess been trimmed off, A TASTE OF BLOOD would have clocked in at a tight 75 minutes. As it stands, there just isn’t enough worthwhile material here to justify a running time of 117 minutes.

For example, early on in the film it is established that John is a workaholic and perhaps even an alcoholic. He keeps a bottle of whiskey on the table, a bottle which slowly empties with each dissolve or fade in. We see John beginning to crave the vampire brandy he keeps in the cupboard. As all this is going on, his mood is changing. He ignores and verbally abuses his loving wife, becoming more and more withdrawn with every drink.

These early scenes led me to believe that what Lewis was constructing with A TASTE OF BLOOD was an elaborate allegory all about alcoholism. After all, what better way to do that than by crafting a vampire story? But no, those early scenes are not there to serve any kind of subtextual purpose. They’re simply there for melodrama. John’s slide from human to inhuman takes roughly 45 minutes. Without those early, largely redundant drinking scenes, we would have arrived at John’s vampiric destination 10 or 15 minutes earlier. That would have made quite the difference.

Because the film is very light on action. There are only a few murders and one half-hearted chase scene throughout the entire film. Most of the movie is talking, about relationship issues, about the history of Dracula, about revenge and reconciliation, about superstition in the modern age. Along the way, it hits all the narrative stops you would expect from a vampire film. We go to England. We meet a Van Helsing. We discover that Helene is being preyed upon by her vampire paramour. So on and so on. All that’s missing is Dracula’s underlings. There are no brides of Dracula here and no Renfields either.

Indeed, one of the most interesting elements about A TASTE OF BLOOD is that it marries the Hammer Dracula film with Lewis’ own gory slashers. John isn’t draining these people of their blood to turn them into his undead slaves. No, he’s tracking down the relatives of folks like Quincey Morris and driving stakes through their hearts. In this film, Dracula isn’t concerned with timeless love and quasi-sexualized bloodletting. He’s all about petty revenge.

The real fun of A TASTE OF BLOOD is watching how all these familiar elements play out in unfamiliar ways. It’s a bit deconstructionist and a bit self-deprecating. It’s certainly more than a little self-aware. But on the surface level, it’s just a well constructed vampire movie, albeit one with major pacing issues in the first half. The fact that the film is every inch a Herschell Gordon Lewis production only adds to the fun. There is a burlesque scene crammed in for no good reason. Our hero is played by Lewis regular William Kerwin, with all his usual workmanlike charms up front and center. Characters all talk like they’re trapped inside a B-movie and the blood, when it flows, is bright and vivid, like a beautiful Crayola fountain.
Posted by David Grant at 10:57:00 PM
Email ThisBlogThis!Share to TwitterShare to FacebookShare to Pinterest
Labels: 1967, 31 Days of Horror 2017, A Taste of Blood, black comedy, Dracula, Herschell Gordon Lewis, Horror, vampire