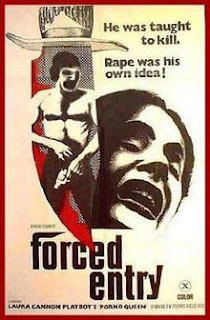 The anti-Vietnam War film was its own cottage industry in the 1970s, perhaps best demonstrated by mature, important works like APOCALYPSE NOW and COMING HOME. These were Academy Award winning movies and cultural touchstones. They captured the disillusionment and the disappointment, the existential angst, and the destruction of families and small town communities. They were important in their own way, a coping mechanism of sorts for people still stumbling their way through the grief and the outrage.

While films like THE DEER HUNTER were winning Oscars, the exploitation film industry was dealing with the War in their own way. In fact, they beat mainstream Hollywood to the punch years before the 70s rolled around. In 1968, the John Wayne pro-Vietnam War propaganda film THE GREEN BERETS opened in theaters and was a major financial success. But with some critics and liberal pundits, many of whom could smell the stench of government and military support all over it, the film was borderline offensive.

That same year, two genre films were also released, George Romero's groundbreaking NIGHT OF THE LIVING DEAD and Peter Bogdanovich's TARGETS. Romero's film was a social allegory, one that explored the fractured landscape of wartime America. TARGETS meanwhile gave birth to the stereotypical tormented Vietnam Vet character, a villainous role that would power seemingly endless slasher movies. Bogdanovich used the real life story of Charles Whitman, an ex-military man who in August of 1966 shot and killed over a dozen people at the University of Texas at Austin, to propose a new kind of American nightmare, an ordinary citizen conscripted into the killing machine of the US military. What were these men to do when they came home and what would happen if they couldn't turn back on the inhibitors that were switched off when they were unleashed into the battlefields?

Whatever good will films like THE GREEN BERETS built up with the American cinema goers in the late 1960s was gone once the news of the My Lai Massacre was made public. From that point on, domestic resistance grew and the anti-Vietnam War film became the staple. The cynicism of Romero and Bogdanovich was roundly vindicated. The exploitation industry found its model.

Anti-Vietnam War exploitation films run the gamut from realistic terror films like THE LAST HOUSE ON THE LEFT to more dark fantasy horror like DEATHDREAM. Slasher films grabbed hold of the mad ex-soldier and never let go. These films were dark, vicious, violent and nasty. But even more so, they were angry. Growling. Full of barely contained rage. They didn't go for sympathy or empathy. They didn't try to understand the War or the people who fought it, often against their own free will. They were the rage against the military machine, pure and simple.

With the exception of a long, useless bit of sex between a husband and wife at the beginning of the film, all of the male-on-female sex in FORCED ENTRY is rape and the purpose of that rape is not pleasure. At the end of both acts, Reems tells his victims that he didn't enjoy it at all. But pleasure was never what was sought in the first place. The purpose was to commit violence, to dominate, to invade. Reems spends most of the film having flashbacks to Vietnam, or at least we assume at first glance that they're flashbacks. While it's never really explicitly stated, it soon becomes obvious that these flashbacks are not vivid, painful memories intruding into Reems' conscience. Rather, all the dead bodies and the fire and the artillery and the destruction… These are things he actively thinks about. These are things he misses about his time overseas. When the film juxtaposes a cumshot with real life imagery of dead Vietnamese children, all female… Well, it's difficult to escape the idea that this character is more than a simple shell shocked ex-soldier.

The unnamed gas station attendant is never painted as a victim of the War. He's a misogynist. He's a sociopath. He is a cynic who growls angrily at two free love hippie chicks for no other reason than they represent the antithesis of his world view (hence their role in his death; he simply cannot take their rejection of his pathology and dominance). He is, in many ways, presented not as a product of the Vietnam War, but a stand-in for the War itself. And if you think that is too lofty a bit of symbolism for a cheap porno… well, you're probably right, but one of the most interesting things about FORCED ENTRY is how deftly it avoids simplistic evaluation.

Because there is motive in this quickly shot, cheaply produced sex flick. There is definite skill behind the artistic choices Costello made (although writing in a sex scene for himself seems a bit immature). Yes, the film is somewhat sloppy. Boom mics show up quite a bit and the hand held camerawork sometimes struggles to keep actors in frame, but the film is so deliberately confrontational, both in tone and visuals, that you really can't remain impartial as you watch it. The acting, believe it or not, is pretty damn good through most of the film and those performances help lift it to an entirely different level. With the exception of Gaspar Noe's IRREVERSIBLE and Catherine Breillat's FAT GIRL, I can't think of another film that captures the horrible act of rape this, for the lack of a better word, well. I challenge you to not feel sick as Laura Cannon's character is violated and murdered. I haven't felt that kind of revulsion in a long, long time. In many ways, this is as effective a horror film as you're likely to find.

There are some genuinely great, genuinely effective films that just so happen to be pornographic. FORCED ENTRY is one of those films. You probably won't enjoy the ride it takes you on, but you really cannot deny that there is power in this film, that it evokes outrage and revulsion with terrifying efficiency. And I am also a fan of outrage and revulsion. I am a fan of film as an emotional conduit between a filmmaker and an audience. I didn't like what FORCED ENTRY made me feel, but I will applaud it until my hands bleed for making me feel something. That's more than can be said about a lot of films these days.
Posted by David Grant at 11:18:00 PM
Email ThisBlogThis!Share to TwitterShare to FacebookShare to Pinterest
Labels: 1973, Adult, Anti-Vietnam War, Forced Entry, Harry Reems, Horror-porn, Laura Cannon, Rape-Revenge, Roughie, Shaun Costello, XXX