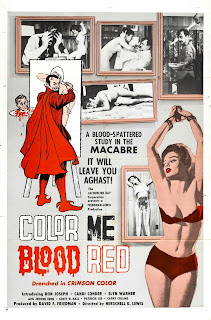 Lewis was always able to turn the act of murder into an entertaining bit of low(est) brow art, but here in a film about that very thing, he stumbles completely. Adam Sorg, the downtrodden painter who discovers that human blood provides his art with just the right oomph to attract critical praise and commercial interest, could be seen as a stand-in Lewis, an ex-advertising man turned nudie-cutie director whose film career was going nowhere fast. Lewis came upon the idea of adding graphic, ludicrous gore to his films and just like that, he found himself a profitable commercial niche.

But a niche can sometimes be a noose and you can definitely sense that Lewis was afraid of being trapped in the gore film forever. In that way, COLOR ME BLOOD RED can be seen as a kind of testimonial film, a movie all about an artist whose bloody work creates a kind of commercial and artistic whirlpool from which he cannot escape.

However, for as interesting as the film might be on a kind of autobiographical level, it just does not work well as a piece of entertainment. You can feel Lewis exercising a considerable amount of restraint throughout the film, especially in the area of on-screen violence. In terms of raw body count, COLOR ME BLOOD RED is by far the most anemic film in the entire Blood Trilogy. There is at least one great killing in the film, a riotous scene in which Sorg terrorizes two love birds riding water bikes in the ocean, but for the most part the killings are all strikingly tame. The only real bit of gore we get is a brief scene of Sorg wringing some blood out of an exposed wad of guts. The rest is rather unmemorable.

The characters are just plain awful. Sorg is every inch the annoying artiste, a bug eyed, whining brat of a man prone to screaming fits and grating histrionics. Oddly enough, when we first meet him, he’s quite likable, albeit a touch too sarcastic. His early scenes with his live-in lover Gigi are some of the best scenes the film has to offer. The two have an “if we ever get married…” in-joke that runs throughout all their scenes together, a kind of rib-poking light insult that gives the couple a genuine spark and chemistry. But then Gigi has to go and accidentally cut her finger on a broken frame, bleeding onto an empty canvas. The sight of the red blood awakens Sorg's creative energies and Gigi.. well, she ultimately ends up with a knife to the face as a result.

Her blood ends up smeared all over a rather terrible painting and that painting attracts the attention of Mrs. Carter, a well-off art appreciator with a lovely teenage daughter named April. April has a boring new boyfriend named Rolf and two beatnik friends, Jack and Sydney, who think it’s farrrr out to dress in identical costumes, right down to wearing the same wig. April and the gang will form the other half of the film’s focus, culminating in Sorg taking an unhealthy interest in April.

Unfortunately, April and her friends are every bit as annoying as our lead psychopath, especially the beatnik couple. They’re the cinematic equivalent of nails on a chalkboard. So what we have here is a gore film that is light on gore filled with characters light on character. Though the jazz score is catchy and the film does contain some of the most striking compositions in all of Lewis’ oeuvre, the film really is an abysmal watch. The subtext of the film is the only thing worthy of consideration here, but even then the film makes it’s entire point shortly after Gigi’s murder. So had the film just been a 35 or so minute short, it would have been pretty damn good. But no, the film then spends 40 minutes lazily repeating itself until the underlying point of the film is drowned beneath all the lousy pacing and grating performances. It's a terrible miscalculation of a film and had it been, as it was planned to be, Lewis' farewell to the horror genre, it would have been a very bad way to go out.
Posted by David Grant at 10:00:00 PM
Email ThisBlogThis!Share to TwitterShare to FacebookShare to Pinterest
Labels: 1964, 31 Days of Horror 2017, black comedy, Color Me Blood Red, gore, Herschell Gordon Lewis, Horror