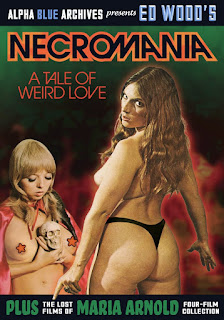 I'm sure some of you are curious. What is the movie about? Well, it's about a couple, Danny and Shirley, who are having relationship issues. Danny can't seem to get it up. Shirley is a raging bitch about it. They decide to seek help, but not by visiting a doctor or a therapist. No, they seek erectile dysfunction advice from a necromancer named Madame Heles, a mysterious woman who lives in an isolated mansion with her handful of helpers.

While they wait for the clock to strike midnight (because necromancers, like vampires, only roam the planet at night), the couple meets the help. Shirley pairs up with a woman named Barb while Danny beds Madame Heles' second in command, Tanya. After a whole lot of boring sex, Madame Heles awakens from her slumber inside a coffin to suck off Danny and bring this whole embarrassing endeavor to a close.

This movie is 54 minutes long. 30 of those minutes are devoted to sex scenes. Two of those minutes are spent watching Danny and Shirley driving. The rest is basically Shirley berating her stupid limp dicked boyfriend. If the sex wasn't so incredibly boring to watch, those 54 minutes would have flown by, but as the sex is as pleasant as a wet fart, that hour crawlllllled along at a snail's pace. If you have a fetish for watching one woman lazily roll her tongue around the pubic hair of another woman, this is definitely the movie for you. Unfortunately, it was not the movie for me.