THE BLOOD ON SATAN'S CLAW 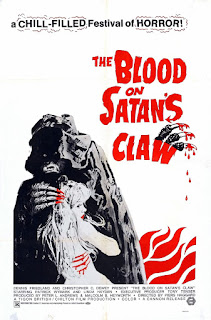 The setting is a small village in 18th century England. While out plowing, a young man named Ralph discovers what appears to be a malformed human skull. Frightened, he seeks counsel with a local judge. When the two investigate, the pile of bones is missing. The judge puts it down to Ralph’s wild, superstitious imagination, but the young man persists. It was a skull, not quite human, lined with fur.

A short while later, Peter arrives to spend the evening with his overbearing aunt. He introduces her to his betrothed, a plain woman named Rosalind. As it would be inappropriate for an unwed man and woman to spend the night together in the same room, Peter’s aunt demands Rosalind sleep in the attic. Late in the night, something unseen attacks Rosalind, robbing her of her sanity.

Something evil is clearly afoot. That malformed skull wasn’t the only discovery made in the field. Angel Blake, a lovely young schoolgirl, discovered a claw, and now, tainted by the influence of Lucifer, she is amassing a small cult of local children, all of whom are very excited for the black mass they will soon be performing deep in the woods. After they've scrounged up a few sacrifices, that is...

And thus begins THE BLOOD ON SATAN’S CLAW, Piers Haggard’s brilliant, though unpleasant, 1971 mixture of Satanic Panic and Killer Kids tropes. Like the best demonic chillers, it takes itself completely seriously, delivering even its most absurd moments with a stone-faced sincerity. It feels like a film written by someone who actually believed all this gobbledygook about children growing patches of goat’s fur as a result of demonic infestation. The resolute earnestness of the screenwriter, Robert Wynne-Simmons, helps mask the more ridiculous moments, like how Angel grows absurdly thick eyebrows as the film goes on or how Peter hacks his own hand off during a particular vivid nightmare.

Based ever so slightly on the Manson Family murders, the film is at its strongest when it focuses more on the children (many of whom look to be in the their late 20s) and less on man-goats and people throwing women into ponds to see if they float. The film treats the demonic infestation as a kind of sexually transmitted disease. A young boy named Mark begins suffering physical ailments after playing around with Angel in private. A sign of inner perversion is the growing of body hair below the waist. Angel, played by a very lovely (and very 17 years old) Linda Hayden, strips completely nude in an attempt to seduce not just the town Reverend but the audience as well. The film contains a very disturbing rape. To restore the purity of a young woman, a doctor goes about shaving off the layer of devil’s hair lurking just above her thigh.

The film drips with a kind of body horror mentality, that sex is perverse, that sexuality is inseparable from sin. But these more serious (and far more interesting) bits of subtext co-exist with campy, escapist horror. As a result, this incredibly straight-faced horror film has a slow motion filled ending featuring a man dressed in a monster suit. It isn’t entirely a happy marriage thanks to some shoddy effects work, but overall, the cornball horror moments don’t come close to derailing the film.

Tied with WITCHFINDER GENERAL as the strongest Tigon British Film Productions release of the early 1970s, THE BLOOD ON SATAN’S CLAW has grown a substantial cult following over the years, thanks in no small part to its barely legal nudity and copious amounts of confrontational violence. For me, what keeps the film lingering in memory is just how convincingly it tells its absurd story and how well Haggard and Co. were able to pull it all off with a meager budget and little production time.

This is a rough around the edges film, nowhere near as polished as even the most low budgeted Hammer production, but the low budget feel lends to the proceedings an air of reality. THE BLOOD ON SATAN’S CLAW is largely free of distracting artificiality. Most of the film is shot outdoors in dirty environments full of leaves and mud and decay. The world of the film feels lived in. It feels natural, like it still exists somewhere off the beaten path out there in rural England. And that sense of the real does wonders here. I don't think this film would have worked nearly as well had it been given the luxuries of your typical Hammer production.

THE BLOOD ON SATAN'S CLAW is a tough film to watch and an even tougher film to digest, but as a piece of strong, effective horror, it's damn near a mini-masterpiece. Easily one of my favorite British horror films.
Posted by David Grant at 4:50:00 PM
Email ThisBlogThis!Share to TwitterShare to FacebookShare to Pinterest
Labels: 1971, 31 Days of Horror 2017, cult classic, demonic possession, killer kids, Linda Hayden, Pier Haggard, Satanic Panic, The Blood on Satan's Claw