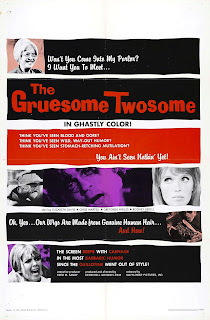 THE GRUESOME TWOSOME is as close as you’re ever going to get to a Herschell Gordon Lewis giallo. The disappearance of several college girls sparks the obsessive curiosity of a pretty blond named Kathy. Her investigation leads her to a wig shop run by a kindly old woman named Mrs. Pringle, a widow living with her stuffed cat Napoleon and her mentally challenged son Rodney. What Kathy doesn’t know is that Mrs. Pringle is the culprit, a psychopath luring young college girls to her home with the promise of a cheap room to rent. Once the trap is sprung, Rodney murders the co-eds and messily scalps them. Their long locks of hair are then turned into Mrs. Pringle’s fancy wigs.

In case you’re wondering, yes, I did just sum up the entire plot of this film in five sentences. Lewis’ 1967 return to full-on splatter isn’t exactly teeming with narrative. In fact, it begins with a bizarre puppet scene of two mannequin heads, each adorned with paper mache eyes and mouths, discussing the events of the film. The only reason this scene exists is to help pad the run time out to feature length. It isn’t the only bit of padding either. There’s a damn near five minute long scene of college girls dancing on beds in negligees crammed in there too. As we know who the killer is right from the get go, there wasn’t much need for a seven and a half minute long scene of a curious Kathy following her school’s suspicious Swedish janitor to his home. Red herrings don’t work if you know the killer’s identity. But the film really needed to be 70 minutes so….

With Kathy filling the required amateur detective role, the second most important bit of the giallo formula would be the murder set pieces. How does THE GRUESOME TWOSOME stack up, you ask? Well, the film might be suspense free, but it is not without its fair share of nauseating violence. Released a scant 19 days after Lewis’ anemic vampire thriller A TASTE OF BLOOD, THE GRUESOME TWOSOME dives straight back down the rabbit hole of excess with a handful of grotesque murders. Each scalping results in a nasty sludge of tomato paste running down a victim’s face. Rodney uses an electric carving knife to slowly decapitate a woman. A down-on-her-luck lass looking to sell her locks for a few bucks is graphically disemboweled. It’s sick, gooey stuff.

The nasty gore sits alongside a generous helping of Lewis’ typical black humor. There’s a really weird scene of Kathy and her boyfriend Dave at the drive-in. All she wants to do is talk about the unsolved murders. All he wants to do is make out. Their scenes are intercut with the movie playing on the drive-in screen, a pretentious arthouse film all about a man eating potato chips and squishing fruit while his off-screen lover tells him how much she adores him. The aforementioned slumber party scene features our nightgown wearing babes eating from a bucket of Kentucky Fried Chicken as they shuffle suggestively to the jazz music blaring on the soundtrack.

None of it makes much sense, even the relatively straight forward stuff, but then again, it’s not really supposed to. It’s a nonsense brew made of mystery thriller tropes, proto-slasher psychobabble and soft nudie-cutie moments. It delivers the splatter and a few chuckles, and that’s about it. It’s as flimsy a plot as you’re likely to find, carried out in typical Herschell Gordon Lewis fashion. It’s easy going sleaze. Take it or leave it.
Posted by David Grant at 4:23:00 PM
Email ThisBlogThis!Share to TwitterShare to FacebookShare to Pinterest
Labels: 1967, 31 Days of Horror 2017, black comedy, gore, Herschell Gordon Lewis, Horror, splatter, The Gruesome Twosome