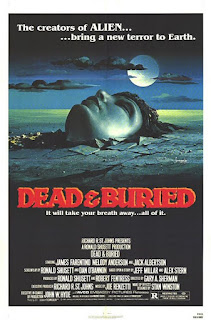 Gary Sherman followed up his socio-political cannibal thriller debut RAW MEAT with another genre-bending shocker, 1981's DEAD & BURIED. It's a strange film, a mix of Twilight Zone morality tale and full blooded horror. It begins with your typical horror movie shock opening, all bared breasts and bloody violence, before moving into mystery territory. The opening murder is but one of many that have been occurring in the small, idyllic town of Potter's Bluff. Unknown to the police, these murders are being committed by a group of locals, many of whom bring cameras along with them to the scene of the crime. As the clueless town sheriff continues his investigation, he quickly discovers that his neighbors are not who they appear to be and neither, so it seems, is reality.

After all, there is no rational explanation for why the murder victims are suddenly being spotted all over town, quite alive and quite happy. That sort of thing doesn't happen in real world, does it? So what is the explanation for the ever-escalating madness in Potter's Bluff? Is it terrible science or is it devilry?

I won't spoil the ending of the film for those of you who haven't seen it, though chances are you'll figure it all out well before the final half hour rolls around. That final half hour, by the way, is where Sherman's otherwise excellent thriller starts to fall apart. DEAD & BURIED has a twist ending and that ending really only works the first time through the film. A properly executed twist ending should clarify narrative events. It should elicit cries of “a ha! Now it all makes sense!”. With knowledge of the twist in mind, a repeat viewing should reveal hidden depths. You should be able to see the strings. It's like knowing how a magician pulled off his trick. While the ending of DEAD & BURIED carries an emotional wallop, it unfortunately brings up more questions than the film actually answers, revealing the otherwise carefully constructed plot to be little more than a shaky house of cards.

So whenever I watch DEAD & BURIED I try my damnedest to put that ending out of my mind. I do my best to overlook how none of this shit really makes sense. I focus instead on all the fantastic things Sherman crammed into his film, like the excellent atmosphere of its setting. I have quite the fondness for horror movies set in small, isolated towns where everything seems to be just a touch off from the norm. I focus on the great performances from its great cast of character actors like Robert Englund, Jack Albertson and Lisa Blount. I pay extra close attention to the fine make-up effects work of Stan Winston. Yes, sir, there is a lot to love about DEAD & BURIED.

In a lot of ways, this is a kitchen sink kind of film. The isolated town full of crazies, the zombies, the face melting body horror, the talk of voodoo and witchcraft, the strange snuff films, the random bits of nudity… Were it not for that damn ending, I think DEAD & BURIED would be some kind of forgotten mini-masterpiece of strange horror, one whose chief claim to fame was landing on the dreaded DPP Video Nasty list back in the 1980s. But I just can't deny it. That ending hurts. Sherman created his own little Icarus here. So close to greatness. If only those wings didn't fall apart.
Posted by David Grant at 12:29:00 PM
Email ThisBlogThis!Share to TwitterShare to FacebookShare to Pinterest
Labels: 1981, Dead & Buried, Gary Sherman, Sci-Fi, Stan WInston, Vestron Video, Video Nasty, witchcraft, Zombie Film