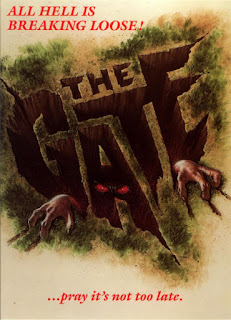 1980s kid focused nostalgia is all the rage these days thanks to Stranger Things and the recent IT adaptation. Already we have whispers of a new GREMLINS film and more rumors that the long delayed THE GOONIES sequel might actually be happening. If you prefer your entertainment on the small screen, don't worry. More and more late 80s TV properties are coming back 'round. It's a good time to be a fan of hair metal, spandex and bangs. But for all the love being thrown around for 1980s entertainment, there is at least one movie that never seems to get the affection it deserves.

Tibor Takacs' 1987 (kinda) family friendly spook show THE GATE got lumped in with other diminutive creature features like GHOULIES and TROLL back in the day. Truth be told, it's a hell of a lot better than either of those two films. In terms of pure 80s kid appeal, it might not have had the gravity of THE GOONIES, but it certainly had the attitude down pat. Looking back now, I don't quite know why it wasn't my favorite film growing up. It has all the requisite I Love the 80s! elements. A rock album riddled with devilry, a horde of three foot tall monstrosities that show no compunction towards harming children, monsters under the bed, surprise appearances of walking corpses, something rotten and evil in the heart of suburban neighborhood... Yes, indeed, THE GATE was stuffed full of shit I loved as a kid.

And unlike THE MONSTER SQUAD, another late 80s kid focused horror romp, THE GATE references films I actually liked as a pre-teen. Sure, I've long since gained an appreciation for the Universal Monsters, but back in 1987, the idea of a group of kids fighting off a mummy, a wolf man, a Frankenstein's Monster, etc., just didn't appeal to me all that much. While not explicitly referenced, there's a touch of THE EVIL DEAD in THE GATE. Our lead character has an eyeball suddenly appear in the palm of his hand, a disturbing trick I first glimpsed in the incredibly weird (and therefore super memorable) music video for the song Torture, a mid-80s ditty by The Jacksons. There's a touch of POLTERGEIST here, a little bit of Lovecraft, and more than a little bit of Harryhausen. All things I loved dearly at the time (and still do).

Then there's those three foot tall demons that come crawling out of the hole leading to hell that pre-teens Glen and Terry accidentally opened in Glen's back yard. A mixture of stop motion and forced perspective filming, the horde of maniacal mini-monsters are some of the best looking and most fully realized monsters in 80s low budget horror. Oh, and that's the plot, by the way. Through a series of mistakes, accidents and the unfortunate death of a family dog, Glen and his metal loving, half-orphaned friend Terry manage to unleash hell. With their parents away for the weekend, Glen and his 16 year old sister Al have to fend off an army of demons intent on awakening the dreaded Old Ones from their eternal slumber.

Yeah, it's not much of a plot, but it is perfectly serviceable. THE GATE is a connected series of set pieces and scares more than it is a tightly wound, fully realized narrative. Terry, the best Best Friend character in all of horror, has far more development than Glen, the ostensible lead of the film. There's a bizarrely Freudian nightmare scene in which Terry is called out to by his dead mother. When he finds her in the open doorway of Glen's home, she's standing in a white, semi-see through gown, her hair blowing in the wind as she calls out to him with open arms. It's weird, largely due to its slightly suggestive presentation. Though the film seems to want to use parental abandonment as a theme, it all but drops it come halftime. In fact, the film drops pretty much everything. All ongoing plot threads are abandoned to focus solely on the ever increasing mountain of weird shit going on in the house.

While the film never goes full-on horror, there are some rather strong images in the film. A demonic manifestation of Glen's dad has its face pulled apart before melting into a puddle of white goop. Terry is dragged into hell and possessed. In a later scene, Al fends off an attack by Terry by stabbing the poor kid through the eyeball with a Barbie doll. The rotting corpse of the family dog makes a few sudden, horrible appearances. When Glen finally rids the home of evil forces, the ensuing chaos blows him clear out of the house, a la DARKMAN. I can imagine kids getting pretty spooked by all this stuff. But when I first saw the film in the theater, I wasn't scared at all. I was having the time of my life.

THE GATE isn't as impressive now as it was back then, nor is it as flawless as my pre-teen brain made it out to be. It's certainly entertaining. That hasn't changed at all. But the dialogue is pretty cringeworthy (this being the 1980s, expect more than a few instances of people calling each other “fag”), the lack of focus is sometimes distracting, and the absence of real narrative structure makes the film feel somewhat lackadaisical. Clearly, there are problems here. But a lack of heart isn't one of those problems, nor is a lack of energy. THE GATE has survived the years as a flawed yet supremely enjoyable film, one that definitely deserves a watch during the Halloween season.
Posted by David Grant at 1:46:00 AM
Email ThisBlogThis!Share to TwitterShare to FacebookShare to Pinterest
Labels: 1987, creature feature, gateway to hell, Horror, kids movie, The Gate, Tibor Takács, Vestron Video