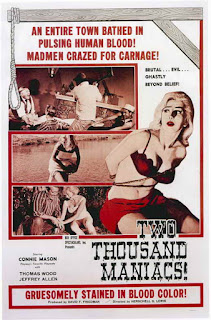 Just one year after inventing the modern gore film with his low budget shocker BLOOD FEAST, Herschell Gordon Lewis returned to the drive-ins with yet another genre innovation. Bolstered by an increase in budget, shooting time and confidence, Lewis created TWO THOUSAND MANIACS!, a dark horror comedy riff on Alan Jay Lerner’s Brigadoon. Six Yankees find themselves in a Southern hell, manipulated and murdered by the jubilant inhabitants of Pleasant Valley, a small redneck community celebrating their town centennial.

With it’s opening theme music enthusiastically proclaiming “oh, the South is gonna rise again!”, TWO THOUSAND MANIACS! births the Southern horror film. If you’ve ever seen a movie about a bunch of Northerners taking the wrong back road into dangerous hick country and enjoyed it, you can thank Lewis. Everything from THE TEXAS CHAINSAW MASSACRE to HOUSE OF 1,000 CORPSES has some of this film’s DNA floating around in it. If you’re in the market for an interesting and effective look at the cultural conflicts that live along the Mason-Dixon line, you would be better off sticking with Hooper’s classic or films like SOUTHERN COMFORT, but as a kind of culturally aware cartoon, Lewis’ film is every bit as enjoyable as the countless films it inspired.

TWO THOUSAND MANIACS! is often referred to as one of the sickest films ever made and that’s a reputation the film actually kind of deserves. While the film isn’t as graphically violent as BLOOD FEAST, it is far more sadistic. The fact that it’s cast of killers are all sweet, jovial and pumped full of so-called “Southern charm” makes the violence they mete out that much more disturbing. A redneck Lothario forcibly cuts a woman’s thumb off and a live dismemberment by ax is carried out by giggling hicks. A gaggle of killers have the time of their lives watching a man being drawn and quartered. None of this is going to look at all convincing to you, by the way. The effects work largely consists of mannequin arms, raw hamburger and poster paint. It’s the gleeful sadism of it all that provides the punch.

If disembodied limbs are not candy enough for your eyes, there’s a bevy of beauties in the cast, including Connie Mason, Linda Cochran, Yvonne Gilbert and Shelby Livingston. Lewis had yet to mix his nudie-cutie proclivities with his newfound interest in gore so if you’re expecting nudity or sex, well… you’ll have to make due with Ms. Mason washing dirt off her legs in a river. But the female cast isn’t just scenery. No one in the cast of this film delivers a great performance per se, but they sure as hell deliver energetic performances. TWO THOUSAND MANIACS! was filmed in a small Florida town and everyone on camera, every single person, is clearly having the time of their life. This movie is not short on energy.

If you’re at all familiar with Brigadoon, I’m afraid I already spoiled the movie for you. For those who have no idea what Brigadoon is, the ending of TWO THOUSAND MANIACS! might come as quite the surprise. It’s a great ending for sure, a real Twilight Zone-style corker that manages to erase every plot hole you noticed throughout the film’s 83 minute running time. It also gives the film a bit of real world relevance. I can’t think of a better time for this film to be rediscovered than right now. It feels like a film uniquely suited to the current political climate of the United States.

TWO THOUSAND MANIACS! was an important step forward in both Hicksploitation and Southern fried horror. I’ve heard that Lewis considered it to be his best film. I think I would agree with that. It’s a fun, funny, gross and nasty little exploitation movie with a few firing neurons and more than a little spilled blood. The perfect way to spend a lazy Autumn evening.