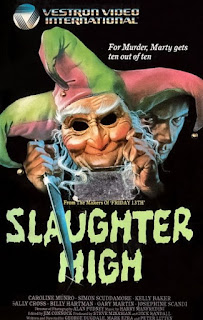 38 years of horror movie watching experience tells me that any low budget slasher film (or any film, really) with three credited writer/directors is going to be an unwatchable mess. As if that wasn't enough, the film decides to really test your suspension of disbelief by casting 30 year old actors, many of whom are British, as American high school students. And if the constantly wavering American accents don't tip you off to the fact that this is a British film with no real understanding of American culture or custom, the film repeatedly points out that April Fool's Day (and yes, this was clearly meant to be yet another Calendar Day Massacre film) ends at 12 noon and not on, you know, the second of April. Apparently, April Fool's Day is a 12 hour affair over the pond.

Then you get into the story of the film. It's your typical slasher movie shit. A nerdy horndog who probably never hurt anyone in his entire life is mercilessly bullied by a group of well-off jocks and preps. The nerd, Marty, ends up horribly burned by acid as a result of the Prank Gone Wrong. Five years later, our group of assholes return to their old stomping grounds for a reunion. Instead of warm welcomes and disco balls, the group finds their old high school abandoned and in major disrepair. Clearly, this “reunion” was just a joke.

But fuck it, they brought beer and hard drugs so the group breaks into the school to throw their own party. Some people screw, some people do cocaine, some people reminisce and some people… well, some people have their stomachs explode from drinking poisoned beer. And that's when everyone starts to realize just what is going on here. Marty, deformed and insane, has escaped the hospital and is out for bloody revenge.

You're expected to swallow a lot of bullshit here. Right in the middle of these nasty murders, two characters run off to have sex. A woman decides to sneak off for a bath because she has a little blood on her face. No explanation is ever given for why there is a bathtub in this high school. Why don't the characters just, I don't know, leave? The film makes this huge fuss about there being electrified fencing around the windows, but later on in the film a character just walks out a side door with no problems. So clearly they could have just walked out of the building at any time.

And why does a rundown and abandoned high school still employ a groundskeeper? Seems like a waste of money. Oh, and how does someone not notice a massive hole in the ground right in front of them? Could they not see it under the bright glow of the afternoon sun? Why does Marty, a 100 pound nerd, seem to have super strength? And why do people in horror movies always store their acid on the top shelf of rickety cabinets? Why couldn't Harry Manfredini write an original score for the film instead of just recycling his score from FRIDAY THE 13TH, PART V?

I don't know the answer to any of those questions. What I do know is that horror films are often referred to “critic proof”. The idea is that no matter how bad a horror film is, horror fans will line up to see it. The underlying assumption there is that horror fans care more about the experience than the intellectual veracity or artistic integrity of a film. If the movie provides them the experience they want (the dumb characters, the T&A, the violence, etc.), they'll overlook shit like bathtubs in high schools or characters making idiotic decisions. And to be honest, that assumption would be downright offensive were it not for the fact that it is 100% true.

Case in point, SLAUGHTER HIGH is a stupid, poorly constructed and horribly acted mess of a film. The few bits of criticism I laid out above (some might call them nitpicks) simply do not do the film justice. It is far more idiotic than I could ever describe in words. Yet the film is undeniably a lot of fun. Some of that has to do with actual skill. The location used for the abandoned high school is genuinely creepy, as is the jester's mask Marty wears as he stalks the halls. The final chase scene is expertly paced and the film (more or less) earns its scares through clever composition and well timed shocks with only a handful of lame jump scares sprinkled throughout the film. It's nasty too, with some genuinely disturbing moments of graphic gore. Also, I wouldn't be surprised to find out that someone from THE DARK KNIGHT crew was a huge SLAUGHTER HIGH fan. You'll know what I mean when you see it.

So yeah, this is a dumb, bad movie you're probably going to hate. Unless you're in the market for a dumb, bad slasher film, in which case you're going to love the shit out of SLAUGHTER HIGH. Is it high art? No. Is it passable art? Depends on where you set that particular bar. But does it matter at the end of the day? Not really, because SLAUGHTER HIGH is all about the slasher experience and that's what the film delivers. It's a dumb (did I mention that?) stalk and slash horror film loaded with gory, nasty murders and more than a few chills. If that's what you want, this film will give it to you. If you want LITERALLY ANYTHING ELSE… You should probably give this one a pass.
Posted by David Grant at 4:25:00 PM
Email ThisBlogThis!Share to TwitterShare to FacebookShare to Pinterest
Labels: 1986, 31 Days of Horror 2017, Caroline Munro, Comedy, Good Bad Movie, slasher, Slaughter High, Vestron Video