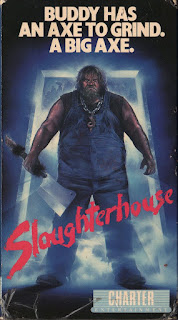 SLAUGHTERHOUSE, a 1987 slasher film from one shot director Rick Roessler, is a play it safe kind of film. It’s main inspiration is THE TEXAS CHAINSAW MASSACRE, a blackly comedic masterpiece of a horror movie that eschews classic slasher tropes for something a bit more unpredictable. For most of its running time, Tobe Hooper’s classic shocker is an inverted home invasion movie. The bad guys are not trying to get into someone’s home. No, the bad guys are the people constantly dealing with unwanted visitors. It isn’t like Leatherface and Co. go out looking for their victims. The sons of bitches just won’t stop walking through their front door. Given the strict trespassing laws in some parts of Texas, all those murders at the Sawyer house could be considered justifiable homicide.

Now, I don’t want to victim blame these imaginary individuals, but had Liz and her friends not been trespassing at the old slaughterhouse owned by the aptly named Lester Bacon and his mentally handicapped son Buddy, they’d still be alive today. The other victims... well, they were trying to take Lester’s land from him so they could expand their industrial, state of the art slaughterhouse, the same slaughterhouse that ran the Bacons out of business decades ago. What was Lester and Buddy to do about that? Just take it lying down?

The similarities between this film and THE TEXAS CHAINSAW MASSACRE don’t end with the basic premise, either. Main villain Buddy is a fat, gibbering idiot with an oversized weapon, in this case, a massive meat cleaver. While the Bacons are not cannibals, they are butchers with a family home riddled with animal bones and rotting carcasses. A sliding metal door features prominently in one character’s death scene and in another, a character (or two) are hung from meat hooks. The debt this film pays to Tobe Hooper is quite large.

But Roessler’s film is far more overtly comedic than Hooper’s, a fact which helps blunt the impact of its many violent deaths. For the first half of its running time, SLAUGHTERHOUSE is a joke machine of sorts with more than a few groaners and sight gags that fall flat. The second half of the film goes down the typical FRIDAY THE 13TH road. Our lovely ladies head out to the slaughterhouse with their dip shit boyfriends and fall prey to the hulking Buddy. Cue the splatter and the screaming.

SLAUGHTERHOUSE doesn’t really do anything new or attempt anything clever. Outside of the fact that the film does not contain an actual ending, it’s a routine, paint by numbers slasher movie. It isn’t a bad film, per se, just not a particularly memorable one. While it’s playing out on screen, it’s a perfectly serviceable distraction. When it ends, however, it fades quickly from memory. The film’s most unique feature is its VHS box art, a classic design that I imagine most horror fans my age would recognize. It was a major selling point for me back in the late 80s. I vaguely remember renting the film with a few of my friends. I probably got more out of it back then.

But now, watching the film on a sparkling new Blu-ray release from Vinegar Syndrome, SLAUGHTERHOUSE doesn’t exactly set my heart racing. Like I said, the film is a perfectly watchable distraction. It has a few juicy kills, more than a few moments of sheer idiocy (like when the mentally challenged Buddy, a man who can only communicate via pig grunts, figures out how to drive a car in only a few minutes), and an easygoing, low budget charm that I found appealing. I just don’t know why I would choose to watch this film over dozens and dozens of other slasher films. That’s basically my biggest complaint about SLAUGHTERHOUSE. In a sea of like minded films, it never once thought to do something unique, something that would help it stand out. It was content with just being mediocre.
Posted by David Grant at 2:17:00 PM
Email ThisBlogThis!Share to TwitterShare to FacebookShare to Pinterest
Labels: 1987, 31 Days of Horror 2017, black comedy, Horror, Rick Roessler, Slasher film, Slaughterhouse