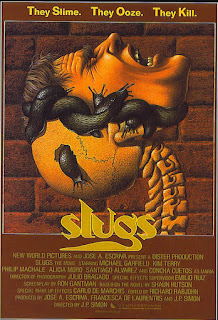 Juan Piquer Simon’s 1988 eco-horror flick SLUGS is a yuckfest in both senses of the word. Equal parts gross and hilarious, this slimy shocker posits a town under threat from man-eating slugs. Born from toxic waste and riddled with parasitic flatworms that can incubate inside human beings, these slugs are no ordinary garden menace. No, these fuckers bite and can apparently move at 500x the speed of your average slug. Just watch the film and witness how quickly hundreds, if not thousands, of slugs can crawl up through a toilet. How does mankind stand a chance against something that can move as fast a reverse shot edit?

Our hero is Mike Brady, a city health inspector. In typical JAWS fashion, Mike will soon become aware of the eco-terror lurking in the waters (the sewer waters, that is), yet no one will believe his story. Not the police. Not the mayor. The only people on Mike’s side are Don, a Department of Sanitation worker, and John, an inexplicably British biologist at the local school. Can our trio of intrepid mollusk hunters really succeed against man-eating slugs so strong they can pull a full grown man over the side of a ship?

No beating around the bush here, SLUGS is dumb. Very, very dumb. But of course it is. It’s called SLUGS, for fuck’s sake. On more than one occasion, a character is found dead on the ground covered in the little buggers. “How did that happen?”, you might ask. I don’t know. Slugs can’t jump, nor can they group up to stretch a rope across a doorway entrance to trip a man. They simply don’t possess the brain power to plan out elaborate ambushes. I guess they just waited for their victim to slip and fall. That happens a lot in this movie. For example, an attractive (and very nude) couple both slip in slug juice while trying to escape a bedroom that inexplicably became goddamn slug central in a blink of an eye. Once they tumble to the floor, they’re chewed apart in a matter of moments. That’s how most of the deaths occur in this movie. People just slip and fall over. There is one awesome exception, though. In the film’s most grotesque batch of scenes, a man accidentally eats a piece of fluke-infested slug then messily explodes in a shower of worms the next day at a business meeting.

The most satisfying moment in the entire film involves the slow, absurd death of some old man who just wants to work in his garden. He slips on his gardening glove (see what I did there?) only to find out the hard way that it contains a hungry slug. As it goes about chomping on his hand, the man thrashes around, eventually knocking over a couple bottles of chemicals. His attempt at cutting the glove off his hand with a pair of garden shears ends up with the man accidentally knocking a shelf down on top of him. As his wife conveniently cleans the living room with the loudest vacuum cleaner known to man, her screaming husband starts to asphyxiate on the fumes from the chemicals. Eventually the wife hears her husband hollering outside and arrives just in time for the chemicals to cause a bit of a fire which zips on over to a normal sized can of gasoline. And just like that, half of the fucking house explodes.

It’s brilliant. Real Naked Gun type of stuff. It would easy for me to continue to trash this film left, right and center, only it’s kinda pointless to do that. After all, SLUGS is NOT A HORROR MOVIE. This is comedy, through and through. Even if it were purely an unintentional comedy, it is a comedy. You cannot take this shit seriously.

The big plan Mike comes up with is to dump a shit load of lithium based arsenic into the sewers, despite John clearly demonstrating that the chemical mixture explodes when it makes contact with water. In other words, they could blow the whole damn town up. This plan is concocted a few hours after Mike’s wife asks him “hey, about those slugs that are all over the backyard… have you tried using salt?”.

In any real world scenario, that’s exactly what would happen. People would use salt, aka Slug Kryptonite. But this Juan Piquer Simon’s SLUGS we’re talking about here. We’re talking about a hilariously stupid, utterly repulsive bit of eco-horror exploitation. Ain’t no real world shit in here. In fact, had this movie not ended with fireballs exploding out of manholes, I would have been thoroughly disappointed.