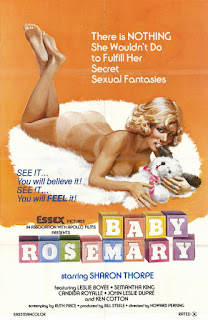 Rosemary is a woman suffering from the fallout of a terrible childhood. Dumped into an orphanage by her absentee father shortly after the death of her mother, Rosemary has grown up cold and repressed. She has a boyfriend named John, a genuinely decent guy looking to join the police force. He loves her, almost obsessively, but Rosemary, still a virgin, refuses to have sex with him, regarding the physical act as “unclean”. To work his frustrations out, John visits a prostitute regularly. In a strange bit of role play, John pays her to dress like Rosemary and call herself by that name.

Though Rosemary has very little love for her father, she attempts to visit him in the motel where he stays. Not finding him in his room, Rosemary decides to wait, only to be accosted and raped by a verbally abusive, clearly violent man named Mick and his girlfriend Kate, an unfortunate event that just so happens to trigger a sexual awakening inside her.

A few years later, Rosemary is a teacher and John is finally on the force. Meeting for the first time in years, John informs her of her father’s death, news that Rosemary largely just shrugs off. She introduces John to a couple of her pupils, two nubile young ladies belonging to an occult group that views life and death as expressions of sexuality. A little later, the two students will seduce and screw the funeral director looking after the corpse of Rosemary’s father while John and Rosemary watch and fondle each other.

John and Rosemary begin seeing each other, but there is something about him that turns her off. Instead, she seeks attention from Mick, her old rapist. As he verbally abuses and aggressively fucks her, Rosemary has her first orgasm. From that point on, the two are a thing. But their intense sexual relationship begins to change Mick on a fundamental level. He begins dressing better, gets a job, starts treating Rosemary well… He begins, in other words, to act like a responsible (one might even say fatherly) man, a change of character that drains Rosemary of her desire. When she is finally unable to have sex with him, Mick regresses, threatening her life before running off.

This is where Rosemary begins to crumble. She drifts further away, lost and remote. And worse, she begins hearing a voice calling out to her at night, the voice of her dead father...

This 1976 porno flick from John Hayes is a Freudian powder keg of a film. It begins with a warning of oncoming repression with a full screen editorial warning that the government is trying to repress adult entertainment before becoming a film almost entirely about that very subject. Repression runs through the film in waves, colliding with every character, plot point and set up. It hits Rosemary especially hard, giving birth to not just her feelings on sex as “unclean” activity, but to her need to engage with abusive men to get her rocks off. At the center of her psychological troubles is the figure of her father, someone who abandoned her, someone who, the film suggests, abused her. One has to wonder if Hayes was a fan of Sylvia Plath. There’s an awful lot of Plath’s poem, Daddy, floating around in BABY ROSEMARY, right down to the idea of the father as some kind of emotional vampire, a dark force that controlled and overpowered the long suffering daughter.