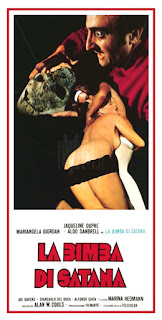 A long, long time ago, on a website long since extinct, I wrote a review for a 1979 Andrea Bianchi movie called MALABIMBA. As I still have a back up of that review lying around, allow me to present you with a highly edited (and poorly written) summation. Ahem.

“MALABIMBA is not a nunsploitation film. I'll just get that out of the way right now. It's not even really a horror film, though it mines THE EXORCIST for a bit of it's inspiration. It's a simple, tawdry sex flick dressed in darker robes. All of the narrative machinations borrowed from the horror genre are there solely for the purpose of pushing MALABIMBA from one sex scene to another...”

“The story concerns the Karoli family, a group of cash-strapped bourgeoise who are in immanent danger of losing the family estate. Andrea, recently widowed and living in the estate with his young daughter Bimba, knows the gravity of the situation all too well and his mother, ever indignant and dead-set against leaving the home, offers him a solution. She proposes that he marry Nais, the rich, slutty wife of his invalid brother, Adolfo. Once Adolfo kicks the bucket, Andrea and Nais will tie the knot, keeping the money in the family. This is not something Andrea wishes to do though he clearly craves a little one-on-one time with his brother's wife.”

I bring this up because what is listed above is not only the plot to MALABIMBA, it’s also the plot for SATAN’S BABY DOLL. Or at least, the vast majority of it is. There are some differences, but overall it is exactly the same. And for the most part, everything that occurs past that point in the plot summary is exactly the same too. The only real difference between Bianchi’s original film and Mario Bianchi’s 1982 remake is the tone. MALABIMBA was very much concerned with eroticism (and thanks to a cast that included Patrizia Webley and Katell Laennec, it succeeded with its goal) over spooks. SATAN’S BABY DOLL tries to have it the other way around.

SATAN’S BABY DOLL does do a little bit more with the family dynamics though. It takes the lax narrative of MALABIMBA and attempts to put a bit of a family drama spin on it. The patriarch of the family, here named Antonio, mourns his dead wife, Maria. The family doctor, ostensibly only concerned with treating the ailing, crippled Ignazio, is hiding feelings of grief, too. It seems everyone in this house (with the exception of Miria) was in some form of a romantic relationship with the dead Maria. That bit of scandal is what pushes the narrative forward. Everyone knows of everyone’s coming and goings, petty jealousies rage, tempers boils over and, eventually anyway, the true cause of Maria’s death is revealed.

And sure, that’s all fine and dandy, but the goddamn film is so slow moving and uninteresting that there might as well not be any plot at all. Maria’s possession of Miria and her slow revenge against the family is handled with no real sense of urgency. Whole stretches of the film are spent watching people do repetitive, mundane things. The opening two minutes is just two naked women in an embrace. The following three minutes are spent watching a family stand around a corpse. At least ten minutes of the film are spent watching a men throw temper tantrums. There’s no pulse here.