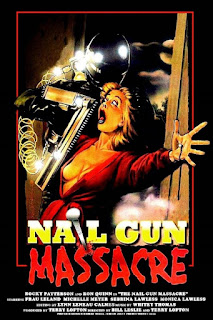 There is a cacophony of environmental noise during every single scene of this film. It was like trying to watch a movie in a speeding car while the windows were down. None of the dialogue is properly balanced in the sound mix and that’s a huge problem. At one point, two characters share an important exchange as they drive away. Or at least, I think it was an important exchange. I couldn’t hear a goddamn word of it over the revving of the engine. To make matters worse, Leslie and Lofton have their killer, the guy (or gal) carrying nail gun hooked up to an air canister, use a voice modulator to hide their identity. The result is a bass heavy voice, almost completely digital, that blends into the discordant noise going on in the background.

I’m half grateful for that fact though, as the villain speaks almost entirely in puns (a full 12 years before BATMAN AND ROBIN, no less) throughout the film. So on the rare occasions when you can hear the killer, every word he (or she) speaks is like a punch to the brain. The killer attacks a man holding a chainsaw, shooting him dead with the nail gun. As the dead man falls over, he accidentally cuts his own hand off. The killer’s response? “You shouldn’t fall to pieces over me”.

- The killer interrupts some guy pissing in the woods, startling him enough that he spins around, pissing on the killer’s boot in the process. The killer’s response? “Well, you just pissed ME off”.

- The killer then shoots him in the groin and quips, “I bet this will stop that leak”.

- The killer nails a man to the wall through his hand. “You should hang around”.

- The killer shoots two random girls full of nails. “It must be two for one day”.

- The killer shoots a hitch hiker a couple of times. “You hitch hikers are all alike, stuck out on the road”.

It should go without saying that the killer is out to avenge the opening rape of a woman we don’t ever see again until the final three minutes of the movie. With the exception of the town doctor (who wears jeans and a white t-shirt because the production probably couldn’t afford to buy nicer clothes) and the useless Sheriff, the only characters we follow through the film are the rapists and their weepy girlfriends. Not a single character is given enough emphasis to be considered the lead so all we get are brief scenes of characters we barely know doing shit we don’t care about before they're killed in unconvincing fashion by an obnoxious killer. We do get the requisite nudity from women who must have reallllllllllllllllly needed the money and a decent amount of spilled blood, but the price we have to pay for those things is too damn steep.

This movie is awful. Period. End of story. Absolute garbage.

Posted by David Grant at 3:37:00 PM
Email ThisBlogThis!Share to TwitterShare to FacebookShare to Pinterest
Labels: Fuck this movie, The Nail Gun Massacre