THE TOWN THAT DREADED SUNDOWN 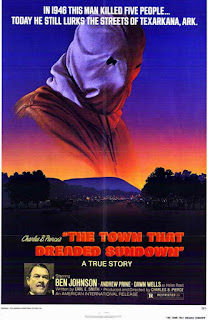 It’s been less than nine months since the end of World War II. The year is 1946 and the setting is Texarkana, a two county region encompassing the twin cities of Texarkana, Texas and Texarkana, Arkansas. The town is experiencing an economic upturn. Home sales are up and demand for automobiles is exceeding supply. Local business is roaring back to life. Patriotism is high. Morale is high. For the citizens of Texarkana, life is good.

Then, on the otherwise quiet evening of March 3rd, a young couple parked on a lover’s lane is attacked in the night by a large man with a sack over his head. Though badly beaten, the couple survive. No evidence of sexual assault is found, but the back and breasts of the young woman were bitten severely, almost like they had been chewed on. This seemingly isolated incident would be the start of a series of mysterious murders all carried out by a single man, a Phantom Killer whose reign of terror would hang like a shadow over Texarkana for the three whole months.

THE TOWN THAT DREADED SUNDOWN is unarguably the most well known film by Charles B. Pierce. It is certainly the most influential. The film is a proto-slasher, released in 1976, two years after BLACK CHRISTMAS and two years before HALLOWEEN. I’ve argued before that while HALLOWEEN was the popular progenitor of the slasher film formula, it was the FRIDAY THE 13TH franchise that truly began the slasher craze. And make no mistake, the FRIDAY THE 13TH franchise owes quite a bit to this film, especially the character of Jason Voorhees.

The first time we see the Phantom Killer, all we see are legs and boots walking down a wet city street at night. The opening scene of FRIDAY THE 13TH, PART II introduces Jason the same way. The look of Jason Voorhees is clearly taken from Pierce’s film, with both killers donning cloth sacks over their heads. It cannot possibly be a coincidence that these nearly identical looking killers both wield a pick ax near the end of their respective films, could it? Of course, the folks that made FRIDAY THE 13TH, PART II have never owned up to their shameless theft from this film, nor have they ever admitted to stealing some of their kills from Mario Bava’s A BAY OF BLOOD. But no matter. The influence is obvious and well… it isn’t like the slasher film wasn’t a self cannibalizing machine anyway.

But for as influential as the film was, it still remains to this day an overlooked cult classic. I can kind of understand why. If you simply walked into this film without knowing a little bit about the docu-horror style of Charles B. Pierce, the film might come off as laughably weird. For starters, the film is narrated, a standard Pierce trick that probably caught a few cinema goers off guard back in the day. Because of its episodic narrative, the narration is useful in keeping us up to date with the when and the where of all this stuff. Our omnipresent narrator also introduces new characters with a short biography and even explains away events that may test audience credulity, like why a police officer doesn’t bother to even take a shot at the Phantom Killer’s car as it drives away.

The addition of a comic copper (the comic relief patrolman, Benson, is played by Pierce) and a few chase scenes that wouldn’t feel out of place in a low budget 70s cops and robbers flick might feel at odds with the more serious nightmare material, but they work rather well in the context of the docu-horror. And as for the slasher elements, well… There’s a reason this film has generated a cult following over the years. When night falls and the film slips into horror movie mode, it is seriously chilling stuff. The violence is neither graphic nor exploitative. It is presented matter of factly, coldly and brutally. Pierce never lingers on gaping wounds or flowing blood, choosing instead to focus on terrified faces, all wide eyes and trembling lips. The killer is menacing, the sparse soundtrack fits the mood, and the moon drenched environments are dripping with atmosphere. The horror elements here are among the strongest stuff the 1970s genre machine ever produced.

THE TOWN THAT DREADED SUNDOWN takes many, many liberties with the truth (but of course it does; it’s a docu-horror, after all) in favor of an exaggerated, almost mythic take on history. As a result, the two lead cops on the case, a world famous Texas Ranger and a stalwart Deputy Sheriff, have a climactic chase with the Phantom Killer in broad daylight. The Phantom Killer captures two teenagers and murders one of them by tying a knife to the slide mechanism of her trombone, stabbing her to death while simultaneously mocking her. In the film, the Phantom Killer’s final target, a housewife played by the lovely Dawn Wells of Gilligan’s Island fame, engages in a bit of cat and mouse with her attacker.

In reality, no one except the victims ever laid an eye on the Phantom Killer and those who survived all gave conflicting accounts of his appearance. No chase between cops and killer ever occurred. In reality, the woman murdered on the night of April 13th played an alto saxophone and that instrument was not used in her murder. She had been shot to death, not stabbed. And in reality, that housewife, after being wounded, ran away into the night, looking for help. The Phantom Killer did not give chase.

This is a melding of fact and fantasy, packaged as a piece of sensationalized media. Plenty of folks took umbrage at it even existing, especially city officials in Texarkana, many of whom were not at all happy with the advertising claim that the unknown assailant might still be walking the streets of the city 30 years later. That’s the kind of thing that can put a dent in tourism. The film ends on a meta note, with a line of people standing outside a Texarkana theater waiting to buy tickets to see Pierce’s film. The camera glides along at ankle level before coming across a pair of shoes, not so subtly suggesting that these shoes belong to the Phantom Killer. It’s a cheap scare tactic, sure. The killer is still out there. He could even be standing right behind you. Boo.

But the final moments of the film illustrate the entire point of the docu-horror. They’re films about how we contextualize history in cinema. About how we sensationalize, place emphasis on perhaps the wrong events, draw conclusions based on after-the-fact conjecture rather than evidence. This is tabloid history. THE TOWN THAT DREADED SUNDOWN was certainly about the Phantom Killer and his (or her) reign of terror, but it’s also about how a very real murder spree has become a glamorized, mythic urban legend. It’s about how we revel in and ultimately romanticize the idea of “the guy who got away with it”.
Posted by David Grant at 3:41:00 PM
Email ThisBlogThis!Share to TwitterShare to FacebookShare to Pinterest
Labels: 1976, 31 Days of Horror 2017, Charles B. Pierce, cult classic, docu-horror, Horror, Proto-slasher, slasher, The Town That Dreaded Sundown, true crime