NIGHT OF THE CREEPS 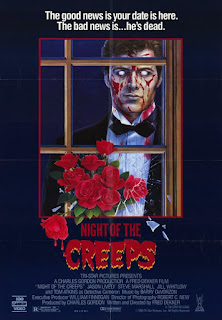 Fred Dekker’s 1986 thrilling directorial debut, NIGHT OF THE CREEPS, is a classic example of 80s cult cinema. It’s a glorious pastiche, a quilt of campy goodness, a Frankenstein’s Monster built from the scraps of the wonderful midnight movies that came before it… I could fill this screen with superlatives. I could shower it with praise from dawn till dusk. I could make sweet love to it like it were a farm animal.

We enter the world of NIGHT OF THE CREEPS as two well worn story lines from classic B-films play out in the halcyon days of the late 1950s. In the first story line, an alien canister comes crashing down to Earth, landing just outside lover’s lane. In the second, an escaped maniac with an ax roams the lonely streets at night. These two bits of narrative collide, resulting in a pair of catastrophes. After driving to a lonely stretch of road to investigate the crash site with his girlfriend, straight-laced Johnny has an alien slug jump down his throat. On the opposite end of the unlucky spectrum, Johnny’s girlfriend meets her fate at the end of the maniac’s ax.

So far, so goddamn glorious. We move forward to 1986. It’s Pledge Week at good ol’ Corman University. We meet our heroes, Chris Romero and J.C. (and yes, most of the characters and locations in this film are named after horror film icons), two dweebs with zero prospects. Chris is in love with the beautiful Cynthia, a sorority girl sweetheart currently dating the loathsome Brad, a fraternity boy douche bag. In an attempt to impress Cynthia, Chris and J.C. approach the Bradster about joining his fraternity. Brad gives them a little job to do, a prank that involves stealing a dead body and leaving it on a rival fraternity’s doorstep. Our heroes reluctantly accept the challenge.

Unfortunately, they choose the wrong cadaver from the hospital. They pick the cryogenically frozen body of Johnny. When Johnny turns out to be not quite dead, the boys freak out and run away, unaware that they’ve just kickstarted a nasty alien invasion. Johnny’s walking corpse is currently playing host to a small swarm of alien slugs. Nasty little buggers, these slugs crawl into the mouths of their hosts before migrating to the brain. That’s where they lay their eggs, turning the walking dead into traveling incubators.

And that’s all I’m going to say about the plot of NIGHT OF THE CREEPS.

NIGHT OF THE CREEPS is built on the back of 50 years of horror and science fiction films. As such it is chock full of references and homages, both subtle and glaringly obvious. It is definitely inspired by ALIEN. The slug creatures are clearly pulled from Cronenberg’s nightmare STD shocker SHIVERS. A bus driver’s eyes bug out of his skull a split second before a car crash, a la MAD MAX. A faceless zombie looks suspiciously like he crawled out of POLTERGEIST. The film not only uses the Roger Corman “every 10 minutes” structure, but Dick Miller shows up as a character named Walter. You could watch this film a dozen or more times and still not get all the little in-jokes and shout outs.

But despite being a love letter to both popular and cult genre cinema, NIGHT OF THE CREEPS never once feels derivative or unoriginal. The tone of the film remains celebratory, not masturbatory (if you don’t understand the difference, watch the opening scene of this film on YouTube. Then watch KILL BILL, VOL. 1. After that. you’ll know exactly what I mean), and Dekker keeps everything cruising along with a steady influx of sharp direction and witty dialogue. In fact, the thing that lifts NIGHT OF THE CREEPS into the realm of genuine classic are the characters, lovable and memorable, played by the likes of Tom Atkins, Jason Lively and Jill Whitlow.

NIGHT OF THE CREEPS is pure brain candy, one of the best sci-fi/horror flicks ever made. I know full well that my opinion here is completely biased. After all, I love this movie more than I love my family. That’s why everyone reading this should know that when I say that the only real flaw I can find in this movie is that it’s not 16 hours long, well… that’s probably not an opinion shared by the majority. As a low budget flick, the movie is short on action but heavy on set up. As a result, I know a lot of people feel the ending is a bit anticlimactic. I can understand that absolute horseshit bit of criticism from the goddamn mouth breathers who fail to recognize brilliance when it’s staring them in their slack jawed, mongoloid faces, but hey, that’s just like their opinion, man, and I think they can fuck off.

Seriously though, I am well aware that the film is in fact flawed, but I still think NIGHT OF THE CREEPS is simply wonderful. We all have those movies that we’ve seen dozens and dozens of times over the years. We all have those movies that we will stop and watch whenever we find them playing on TV. We all have those movies that seem to be finely tuned to our individual pleasure centers. This is one of those movies for me. To be honest, I should not have even written this as it is completely useless as a review. This is just a fanboy rant right now, just me telling you that I have a serious long term crush on this film. If you have yet to watch NIGHT OF THE CREEPS, please do so soon. Who knows? You might just fall in love with it, too.
Posted by David Grant at 4:30:00 PM
Email ThisBlogThis!Share to TwitterShare to FacebookShare to Pinterest
Labels: 1986, 31 Days of Horror 2017, Alien Invasion film, cult classic, Fred Dekker, Horror, Mystery Science Theater 3000, Night of the Creeps