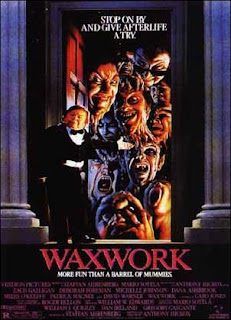 I think I love the idea of WAXWORK more than I love the actual film. It's a simple tale about a group of rich kids who stumble upon a waxworks, a grand museum of horror in which every display is a gateway to a pocket dimension. That right there… that's where I fall in love. Anthony Hickox's debut film is built on a wonderful cinematic idea, a series of short horror set-pieces taking place in virtually every kind of horror movie experience. One might have something to do with a young man being terrorized by a werewolf. One might feature a rampaging mummy. There might be zombies, vampires and maybe even a mad Marquis or two. It's a brilliant concept, an anthology film without the typical anthology structure.

As a film however WAXWORK does have more than a few issues. Our cast of characters here are all rich kids, a bunch of Beverly Hills layabout types that don't elicit much sympathy (but their self importance does make their deaths a great deal sweeter). They're not grating on a Less Than Zero level, but they're far from lovable. The waxwork museum of WAXWORK is located right in the middle of an upper class neighborhood. In fact, it's just some rich asshole's home with a wooden “waxwork” sign above the door. I suppose one could call the cast of spoiled rich kids and the presence of a haunted house (of sorts) in an affluent neighborhood a reversal of expectations butttttttt I don't know. I prefer my spooky houses to be spooky, not lavish, and I have a hard time relating to people who live in mansions and get berated for paling around with their goddamn butlers.

Thankfully, once the film moves out of the realm of interpersonal, whiny bullshit and into the halls of the waxwork museum, things pick right up. David Warner, always a welcome presence in any film, plays the caretaker of this most peculiar museum, a kind of inter-dimensional prison housing the souls of multiple maniacs, monsters and monstrosities. Crossing the stanchions of a display will teleport an unlucky guy or gal into a pocket dimension ruled over by one of the museum's many inhabitants. An idiot trying to retrieve his lighter ends up in a small cabin with a sick man as a full moon rises outside. A hoity-toity gal falls victim to Dracula and his brood. Dying in one of these dimensions means dying for real, your body forever frozen inside the wax display. But the evil caretaker isn't simply collecting new bodies for display. No, he's collecting souls and soon he will have enough to awaken his wax figures, spilling true evil into our world.

OK, I have to get this out of the way right now… I find it rather odd that Hickox chose the Marquis de Sade as the film's final boss of sorts. That's a rather strange choice, almost as strange as using Sade as the fulfillment of the repressed, primal sexual urges of the film's female lead character. I mean, that's all kinds of fucked up. Out of all the “evil” characters in history, why oh why would anyone choose Sade over Elizabeth Bathory, Gilles de Rais, Jack the Ripper, H.H. Holmes… It's just a weird, weird choice in my opinion and it certainly isn't helped by the fact that Sade is presented in the film as an English pirate. Seriously, look down. What in the holy shit is that? 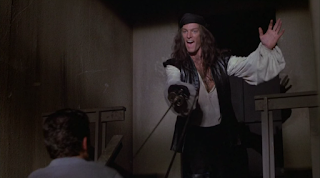 But I guess complaining about historical inaccuracies in a film about pocket dimensions and undead mummies is pretty pointless.

My biggest annoyance with the film however is how it falls apart in the end. Once the wax figures are up and moving (they were always moving, by the way. The actors they cast to play wax figurines in the early scenes didn't do good jobs of standing perfectly still), the film becomes a kind of comedy/action clusterfuck of bad editing, cheap sight gags and even cheaper special effects. So while I appreciated the sight of Patrick Macnee driving an armored wheelchair around a crowded room, smacking werewolves and zombies over the head with a rubber club, I would have preferred the film to play it straight all the way to the end.

Because for as weird and wacky as some of WAXWORK can be, the film is actually a straight horror film for most of its running time. Once we move into the museum, there are quite a few creepy moments (though the gory stuff is mostly missing thanks to the MPAA). I would have liked the film more had it gone for an EC Comics styled final ironic shock instead of a comedic free for all that peters out with a cheap bit of sequel bait. But sandwiched between a shaky first 10 minutes and a crappy final 15 is a really good, monster filled bash. It genuinely is a hell of a good time when it's all working as intended. It's a cult classic for a damn good reason.
Posted by David Grant at 8:10:00 PM
Email ThisBlogThis!Share to TwitterShare to FacebookShare to Pinterest
Labels: 1988, 31 Days of Horror 2017, Anthony Hickox, Horror, Monster movie, the dude from Gremlins is in this, Vestron Video, wax museum, Waxwork