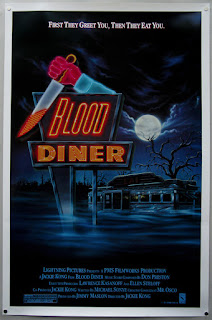 You'll know within the first 10 minutes if Jackie Kong's BLOOD DINER is the film for you. It lays all its cards on the table right away. The film is often referred to as a horror-comedy but it isn't, or at least not in that order. BLOOD DINER is really a comedy-horror with the emphasis squarely placed on sight gags and deliberate attempts at camp. Its splattery effects are designed to give you the giggles rather than the dry heaves.

Within its opening 10 minutes, we see everything the film has to offer. Over the top gore, outlandish performances (all of which are dubbed in over-exaggerated fashion), and an absolute, almost obsessive, desire to be loud, crass and altogether offensive. You either get the joke or you don't. You either find it funny or you don't. You need to make up your mind within those first 10 minutes because the film, once it's set in motion, doesn't deviate from its course.

Unfortunately, while I got the joke, I certainly didn't find it funny. BLOOD DINER was supposedly a remake of (or quasi-sequel to) Herschell Gordon Lewis' BLOOD FEAST at one point in its life before Kong and Co. decided to make it a completely new property. To be honest, the film still is a remake of BLOOD FEAST in a lot of ways. Both films concern ancient blood sacrifices to a dormant goddess, blood sacrifices that require a whole lot of murder and the occasional stitching together of disembodied limbs. While BLOOD FEAST gave us a single cultist, BLOOD DINER gives us two, brothers Michael and George. The brothers are guided along in their task by the disembodied brain of their uncle, Anwar. Oh, and the brothers operate a diner, a nod to the murderer of Lewis' film, a man who ran a catering service.

I spent most of my time with BLOOD DINER fiddling with the volume on my television. There were moments when the film became downright overbearing, with so many voices and environmental noises, none of which were properly normalized in the sound mix, pouring out of my speakers that I could feel my eardrums begin to throb. The few jokes I did find amusing quickly became just another annoyance as BLOOD DINER is a total slave to repetition. It was funny the first time the agitated police chief smacked around his own man, far less so the fourth time it happened. There is most certainly a contingent of horror fans that will laugh their asses off every time a talkative, disembodied brain (complete with eyeballs) bemoans its lack of a dick. For me, it was only half funny the first time. The next 17,000 times the joke was made… Well, you get the idea.

Thankfully, there are some good-to-great moments buried beneath the lousy Troma-styled comedy. A topless aerobics workout gives way to a machine gun massacre. A woman is slathered in batter before having her head shoved into a deep fryer. When the killer finally releases his grip, the woman begins running through the restaurant, her head now encapsulated inside a giant ball of deep fried deliciousness, before finally being decapitated by a broom. There's a fantastically morbid scene later in the film in which George repeatedly strikes a pedestrian with his van, and the entire finale is a bizarre and bonkers bloodbath featuring cannibalism, laser beams and an exploding head or two.

But overall, I just did not enjoy my time with BLOOD DINER, largely because I didn't find the humor at all entertaining or effective. It just kind of annoyed me all the way through. Had they dialed it down a little at the start maybe I could have been eased into it all a bit better. Maybe I could have learned to appreciate the humor. But BLOOD DINER flies out of the gate at top speed and never slows down. The humor starts broad and stays broad. The film starts loud and stays loud. If you're a Troma guy or gal, BLOOD DINER is your flavor of ice cream, but if you're like me, expect little more than a headache and a serious case of the yawns.
Posted by David Grant at 12:57:00 AM
Email ThisBlogThis!Share to TwitterShare to FacebookShare to Pinterest
Labels: 31 Days of Horror 2017, Blood Diner, Blood Feast, Comedy, Horror, Jackie Kong