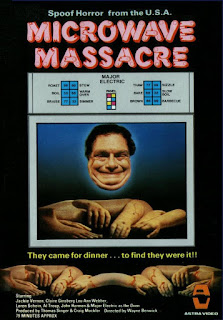 Wikipedia defines dad joke as “a pejorative term used to describe a corny, unfunny, or predictable joke, typically a pun”. I mention this because MICROWAVE MASSACRE, the broad as a barn door 1983 cannibal comedy from director Wayne Berwick, is the cinematic equivalent of the dad joke. There is no subtlety here, no sophistication. As a vehicle for comedy, all its passengers are puns. As a horror film, it barely registers above a dead man’s pulse.

First, a synopsis: All Donald wants is a goddamn baloney and cheese sandwich. Is that too much to ask? Apparently so, as his cantankerous wife, May, refuses to indulge Donald’s easy to please appetite. A lower middle class faux-sophisticate, May is currently obsessed with avant-garde cuisine (or as she calls it, ‘kwee-zeen’), cooking her daily indulgences in an oversized microwave oven.

As a result, after spending a few hours toiling away at a construction site, Donald has to open his lunch box and discover a large, almost cartoonish sandwich filled with out-of-the-ordinary veggies and a whole crab.

One night, Donald reaches his breaking point. After drinking himself into a stupor, he returns home to find yet another plate of weird food staring up at him from the kitchen table. Donald and May have a fight and Donald ends up beating her to death with an extra large salt shaker. He wakes up the next morning with no recollection of May’s murder. So imagine his surprise when he finds her body stuffed inside the microwave.

He cuts up his dead wife’s body and wraps the pieces in foil, cramming it all into a large meat freezer in the garage. Later that night, Donald is a bit peckish. He grabs what he thinks is an ordinary bit of food from the freezer, but GASP! SHOCK! it turns out to be his dead wife’s hand. To his surprise, the meat tastes really good. He microwaves one of May’s arms and takes it to work. Intrigued by the strange sight of Donald chewing on a three foot long slab of cooked meat, two of his co-workers, Roosevelt and Philip, ask for a nibble. They like it, too. But the meat tastes a little old. Maybe something leaner would work better. Maybe Donald should get his hands on some younger meat…

MICROWAVE MASSACRE begins with a shot of May's severed head before moving on to a pair of large bouncy breasts. Donald’s co-workers, Roosevelt and Philip are, respectively, white and black, though the film flips their expected stereotypical racial personalities. That's why white Roosevelt has to teach black Philip how to snap his fingers to the rhythm of a song. A buff and ruggedly handsome construction worker turns out to be a prissy gay man who revolts in disgusted horror after being touched by a buxom blonde sex goddess. Donald decides to rebel against his neat freak wife by emptying the vacuum bag on the couch before pissing into the fireplace. This, Dear Reader, is the level of humor on display here.

MICROWAVE MASSACRE feels like a spoof or a satire, like some weird diatribe against your average television sitcom. It feels like it was designed to have a laugh track, like it’s obvious and groan worthy puns were designed to point out just how unfunny a lot of these sitcoms were. So unfunny in fact that television studios had to design a bit of manipulative psychological bumfuckery, canned laughter designed to make something seem funnier than it actually is. Or maybe Berwick was just trying to make something kitsch and dumb. I don’t know. I don’t know why this movie exists.

I’m just glad that it does.

Count me among the fans of MICROWAVE MASSACRE. I’m not even sure why I enjoy the movie as much as I do. I don’t find myself laughing at it anymore and truth be told, I never laughed at it much back in the day. There are a few really great sight gags, like the African jungle savage driving a catering truck that reads “let us cater your next pagan ritual”, and more than a few gorgeous women to ogle. The man playing Donald in the film is Jackie Vernon, the voice actor for Frosty the Snowman. I have to admit that it’s wonderfully strange to listen to him delivering lines like “I’m so hungry I could eat a whore”. I just close my eyes and imagine a cartoon Snowman strangling and dismembering women.

I am well aware that I’m in the minority when it comes to MICROWAVE MASSACRE. This is not a well regarded or well reviewed masterpiece of comedic horror. I just can’t bring myself to give much of a shit about that as I have a blast every time I watch it. I normally have a hard time enjoying comedy-horror films, especially when they’re this hyperbolic and obvious, but there’s something about MICROWAVE MASSACRE that fits me like an old glove.
Posted by David Grant at 2:55:00 PM
Email ThisBlogThis!Share to TwitterShare to FacebookShare to Pinterest
Labels: 31 Days of Horror 2017, Cannibal film, Comedy, cult classic, Horror, Jackie Vernon, Microwave Massacre, Wayne Berwick